Elias Pettersson and Brock Boeser are back-to-back Calder finalists.
May 2, 2019 9:33 AM By: Daniel Wagner 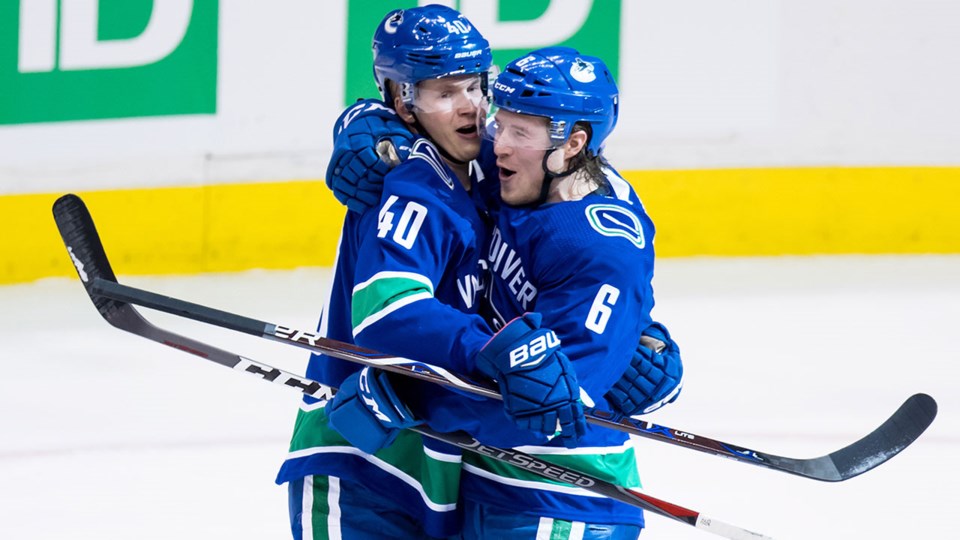 In a shocking development, Canucks centre Elias Pettersson has been named a finalist for the Calder Memorial Trophy as the NHL’s rookie of the year.

Okay, so that’s less “shocking” and more “inevitable.” Pettersson was hoisted up as the surefire winner of the Calder about a month into his rookie year after he scored ten goals in his first ten games. Even after his scoring pace slowed down in the second half of the season, Pettersson was still the odds-on favourite to win the Calder, with The Hockey News even speculating that he could be the first rookie since Teemu Selanne to win the Calder with a clean sweep of first-place votes from the Professional Hockey Writers’ Association.

Heiskanen, for the record, was not one of the three finalists, who were rounded out by St. Louis Blues goaltender Jordan Binnington and Buffalo Sabres defenceman Rasmus Dahlin.

It’s likely that a few other scribes will give Binnington first-place votes for putting the Blues on his back at the beginning of January and carrying them into the playoffs, but only playing 37 games all season will hurt his chances to upset Pettersson. Others might give the nod to Dahlin, who had one of the greatest seasons by an 18-year-old defenceman in NHL history. His 44 points are second only to Phil Housley among 18-year-old defencemen all-time.

Still, it’s hard to imagine Pettersson losing the Calder. He led all rookies in scoring by a wide margin, with 28 goals and 66 points in 71 games. In the process, he broke the Canucks’ franchise record for rookie scoring held by Pavel Bure and Ivan Hlinka. He almost single-handedly made the Canucks competitive, stepping directly in as their first-line centre. He was both a human highlight reel and a responsible, two-way forward, with an impact on both ends of the ice.

Pettersson’s nomination gives the Canucks two-straight seasons with a Calder finalist. Brock Boeser finished second in the voting to Mathew Barzal last season, even earning a couple first-place votes to help spoil Barzal’s potential clean sweep. It’s relatively rare that a team has two Calder nominees in back-to-back years, but the Canucks could do one better: they could have Calder nominees in three-straight years.

Quinn Hughes, the Canucks’ seventh overall pick in 2018, made his NHL debut at the end of this season and immediately looked at home. He tallied three points in five games and showed off his dynamic skating ability, quick decision-making, and high-end vision. It’s not hard to imagine Hughes coming back from his off-season training ready to challenge for the Calder Trophy, particularly if he can find the same chemistry with Pettersson and Boeser on the power play that he showed with them in 3-on-3 overtime.

Only one team since NHL expansion in 1967 has had rookies finish in the top-three of Calder voting in three-straight years. The New York Rangers had Brad Park, Bill Fairbairn, and Gilles Villemure nominated from 1969 to 1971, and none of those three won the award. No other team has done it since, though a couple teams have come close.

The Pittsburgh Penguins had three rookies nominated in two years, with Sidney Crosby finishing second to Alex Ovechkin in 2006, then Evgeni Malkin winning in 2007, beating out his teammate Jordan Staal. Likewise, Patrick Kane won the award ahead of his Chicago Blackhawks teammate Jonathan Toews in 2008, with Kris Versteeg finishing third in Calder voting the following year.

Can the Canucks duplicate that success?

3 - Prior to Boeser and Pettersson, just three Canucks have finished in the top-three of Calder voting: Trevor Linden, Pavel Bure, and Mattias Ohlund.

8 - A couple other rookies that weren’t nominated for the Calder are making a name for themselves in the Stanley Cup Playoffs. Warren Foegele of the Carolina Hurricanes and Roope Hintz of the Dallas Stars are tied for the rookie lead in playoff scoring with five goals and eight points.

I’m dropping the gloves with the Nashville Predators, who were blasted on social media this week for posting an unpaid internship for a hockey analytics job that requires 40+ hours per week and a high-level knowledge of statistical analysis. The job description looked akin to a six-figure job and it’s embarrassing for a multi-million dollar organization like the Predators to ask for that level of work to go unpaid.

A tap of the stick for Jason Botchford seems inadequate, but I can't seem to find the right words to write about his passing. Ed Willes did better over at The Province, while Patrick Johnston captured the bigger picture with reactions from around the Canucks community. Jason Brough and Mike Halford somehow powered through an entire radio show then wrote about him at The Athletic.

As for me, I'm at a loss. Maybe I'll be able to find some better words after some time has passed. Rest in peace, Botch, and my heart and prayers go out to your family and friends.