Canucks are playing injuries extremely close to the vest this season 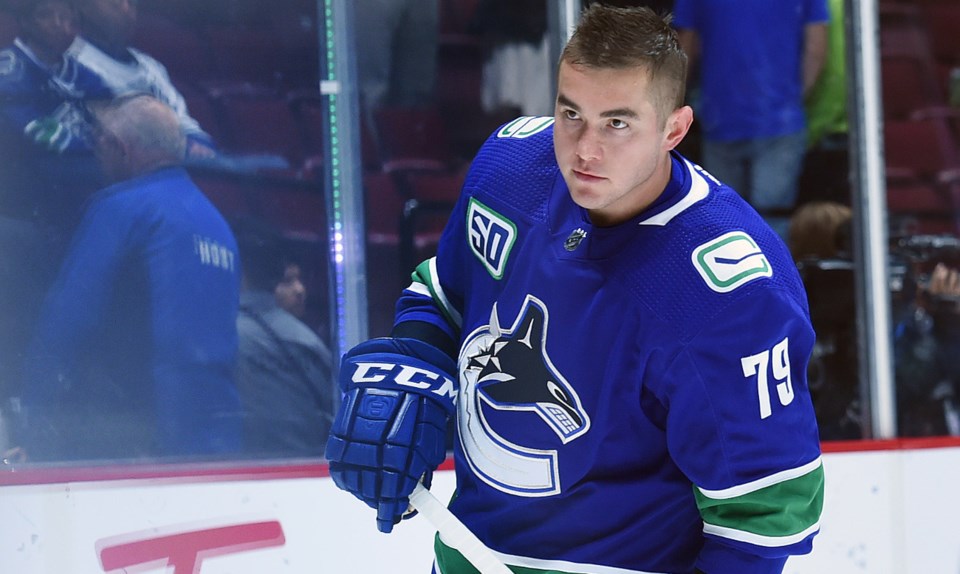 Micheal Ferland doesn’t have a concussion.

That’s about all the Canucks would reveal about Ferland over the last couple days after he left Tuesday’s game with a vague “upper body injury” in his first game back after suffering a concussion earlier in the season.

Of course, it was entirely possible that Ferland had an injury completely unrelated to his concussion: a shoulder separation, fractured ribs, or even a pinched nerve. The Canucks weren’t forthcoming about the injury, so it was impossible to know.

Travis Green was a little more forthcoming about Ferland’s status at Thursday’s game day skate, saying that Ferland was seeing specialists as he’s experiencing “symptoms,” but is not in the concussion protocol. It’s safe to say that Ferland’s “symptoms” are related to his concussion, even if the Canucks won’t specify “post-concussion syndrome.”

Why didn’t the Canucks just say that in the first place? Why did Benning go out of his way to say that he doesn’t have “another concussion” instead of being more forthright?

Alex Edler? We were told a week ago that he would be reevaluated in two weeks. What’s his injury? Who knows? All they’ll declare is that it is an upper body injury.

All they would say about Jay Beagle when he was out was that he was “day-to-day,” even as those days quickly turned into two weeks out of the lineup. What was his injury? No one would say.

Tyler Graovac has been out since December 1st. All the Canucks have revealed is that he has a lower-body injury and will be out “for a while.”

Tyler Motte hasn’t played since October 25th. With Motte, we at least know what the injury is — a broken foot — but the Canucks haven’t given any specifics about the timeline for his return. The closest they would say when he was initially injured is that Motte would miss a couple weeks, which a week later turned into “at least four weeks.”

Brandon Sutter has missed a dozen games since leaving the Canucks’ November 12th game with a groin strain. Again, while the injury itself is known, the Canucks refrained from providing any sort of timetable for his return.

Here’s the thing: while the lack of information can be frustrating, there’s an argument to be made that it’s the right move. Taking Sutter as an example, he’s very close to a return and is practicing with the team, but the Canucks should exercise caution and avoid rushing him back into the lineup. Perhaps being a little more loose with the timelines prevents that pressure.

We can also look to a player that exemplifies the difference in injury information being doled out this season: Olli Juolevi.

Last season, the Canucks got themselves into trouble with conflicting information and shifting timelines when it came to Juolevi. The initial report was that Juolevi had a minor knock and was just sitting out a game as a precaution.

A little over a week later, Juolevi flew into Vancouver to be assessed by the Canucks medical staff, with Benning reporting that “he doesn’t need surgery” and should only miss “the next two, two-and-a-half weeks.”

That experience of giving a little too much information seems to have shaped their approach to giving out injury details this season. Juolevi was once again held out of the Utica Comets lineup in November, but the Canucks, perhaps gun-shy after the shifting timelines last season, didn’t provide any details of the injury. The most they would say is that he had a “lower body ailment” that wasn’t related to his knee injury.

The Canucks brought Juolevi to Vancouver to have the Canucks’ medical team evaluate him, but gave no further updates during the four weeks he missed and no timeline for his return to the Utica Comets’ lineup. Fans and media alike were left to speculate as to the seriousness of the injury and what this might mean for Juolevi’s career.

It was only once he was cleared to play that the Canucks revealed Juolevi had “hip soreness” and that he was held out as a “precautionary measure.” Juolevi has returned to action in Utica and had three assists in his four games since coming back.

The reticence to give out injury information is understandable given the way its bitten them in the butt in the past, but it seems like there should be some middle ground.

With Juolevi, for instance, they didn’t need to speculate on how many weeks he might miss, but they could have said that he was seeing a specialist for his hip and they would provide an update when there was more information. Giving no details at all just invites speculation that an injury is worse than it might actually be.