Canucks call up Nikolay Goldobin, send down Sven Baertschi, because you apparently can’t have both

Travis Green had a simple message for Nikolay Goldobin when he got waived prior to the start of the season: “Keep going.” He kept going. Goldobin could have taken his demotion to the AHL with bitterness.
Nov 26, 2019 10:26 AM By: Daniel Wagner 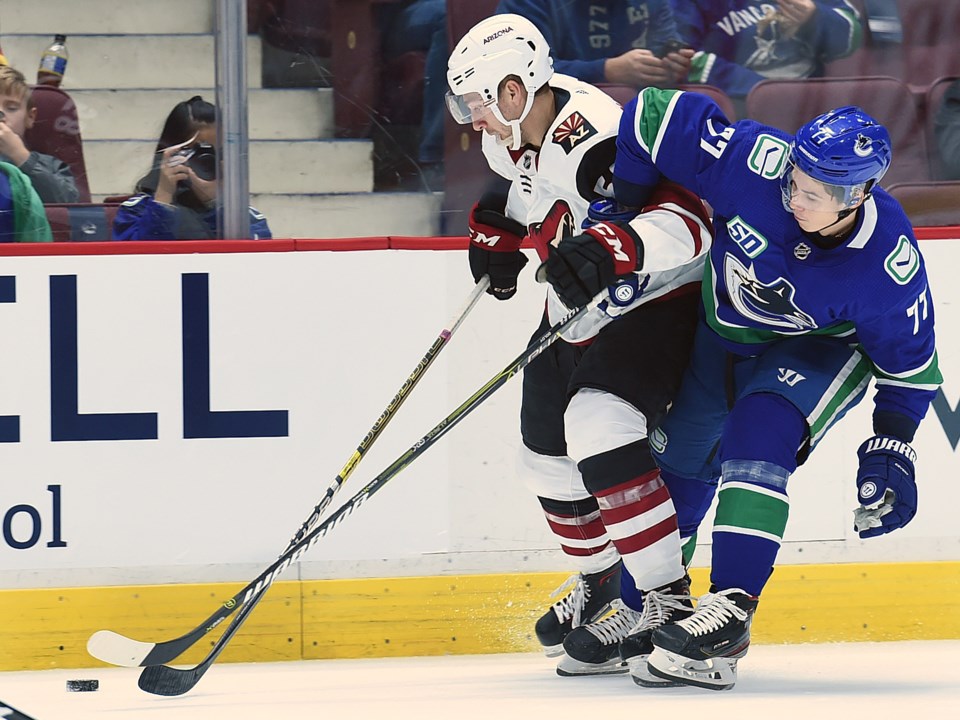 Travis Green had a simple message for Nikolay Goldobin when he got waived prior to the start of the season: “Keep going.”

Goldobin could have taken his demotion to the AHL with bitterness. Instead, he’s become a leader for the Utica Comets, committed himself to developing his two-way game, and outright dominated offensively.

With 20 points in 18 games, Goldobin leads the Comets in scoring and is 8th in the AHL. Early on, he primarily focused on making his linemates better, picking up plenty of assists, but as the Comets started to struggle, Goldobin has taken on more of the goalscoring load himself.

Goldobin has six goals in his last six games, including a hattrick in his most recent game against the Laval Rocket, propelling the Comets to a 4-2 win.

The goals have been nice to see from Goldobin, as one of the primary criticisms of his game from last season was his lack of finish around the net. While he and Elias Pettersson found some offensive success together, Goldobin didn’t get as many goals as he seemingly should have given the setups he received from Pettersson, as he got robbed several times.

“I worked on my shot, to be honest,” said Goldobin during the preseason. “Last year, I could have scored five empty net goals maybe, goalies were soccer goalies. In hockey, it happens sometimes, but I worked a lot on my shot.”

Goldobin also said that he made a minor change to his stick. It’s the same stick, but a little longer, giving him more flex on his shot. Perhaps the added length has helped him defensively as well, giving him more reach.

Getting sent down to the AHL was tough mentally, but Goldobin has handled it well.

“It’s not the place I want to be — in a nice way — but I’ve got to help the team, first of all, and I like the guys,” said Goldobin to The Athletic’s Thomas Drance. “I’m just grinding here to get a chance. It’s simple.”

Now he’s getting that chance. On Tuesday, the Canucks made the call to Utica and added Goldobin to their NHL roster. Now he can only hope to earn head coach Travis Green's trust and show what he can do.

"I know I have to earn the trust," said Goldobin during the preseason. "I hope he's going to trust me...and I can open up as a player and show him, show everyone that I can be good.”

It makes a lot of sense to add an offensive catalyst like Goldobin at a time when the Canucks are struggling to score goals. Over their last 10 games, the Canucks have averaged 2.4 goals per game, fourth-lowest in the NHL in that span.

It’s even uglier if you only look at 5-on-5 scoring: they have just 7 5-on-5 goals, tied with Flames for the fewest in their last 10 games.

That’s why it’s frustrating that Goldobin’s call-up came with a corresponding demotion for Sven Baertschi.

Baertschi also dominated in the AHL when he started the season with the Comets, putting up 10 points in 7 games. Since getting called up to the Canucks, Baertschi has just two points in six games, but has been the Canucks’ best forward in terms of puck possession, with a team-leading 63.93% corsi.

Baertschi was a scratch in recent games after a defensive blunder against the Dallas Stars — one of many defensive blunders by the entire Canucks team in that game — so the demotion to the AHL isn’t exactly surprising, even if it is disappointing.

Part of the reasoning behind Baertschi getting sent down now, however, is likely asset management. If he stayed with the Canucks past December 1st, he would have to go through waivers once again to be sent down to the Comets. This way, he can be freely sent down without risk and be available to the Canucks in the future.

Staying up with the Canucks instead of Baertschi is Zack MacEwen, with his 33.33% corsi, despite playing primarily with the possession-driving J.T. Miller and Bo Horvat.