Canucks call up Sven Baertschi, but weather delays could keep him out of the lineup 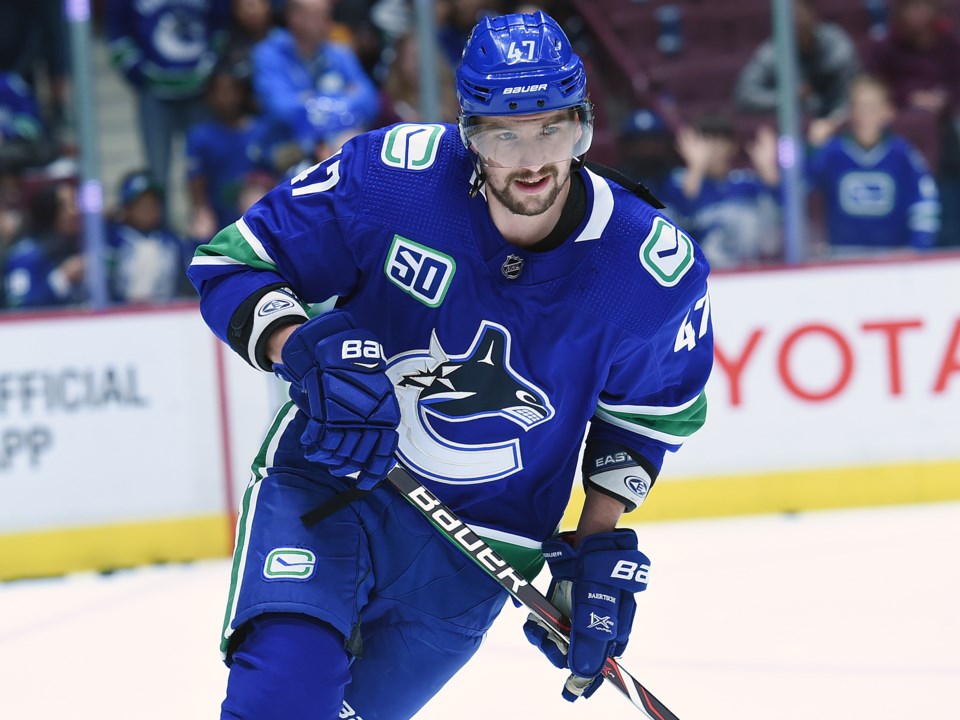 It looks like Micheal Ferland could be out for a little while. The gritty winger suffered an upper-body injury and didn’t play another shift after dropping the gloves with Kyle Clifford in Wednesday night’s game against the Los Angeles Kings.

Some speculated that it might be a hand injury for Ferland, but that reportedly isn’t the case. Ferland has gone on the Injured Reserve list and flown back to Vancouver to see the Canucks doctors, according to Iain MacIntyre. EDIT: Ferland is in concussion protocol according to Canucks head coach Travis Green.

That’s far from ideal for Ferland, who just starting to hit his stride after a slow start to the season. He had three points in his previous two games and was playing with a little more edge. It’s also not ideal for the Canucks, who have been on a roll and likely don’t want to tinker too much with the lineup.

Fortunately, the Canucks have some good depth that they can call on with the Utica Comets — legitimate, NHL-caliber depth that, quite frankly, shouldn’t be in the AHL. Sven Baertschi has been called up from the Comets and is making his way to California to join the team.

There’s just one issue, or rather two issues, with one exacerbating the other. Weather has caused some significant travel delays, compounded by the fact that there are no direct flights to California from the Syracuse airport.

A record-breaking storm hit Upstate New York on Halloween, with high winds and flooding causing power outages and closing roads. That could have delayed Baertschi’s trip to Syracuse, as there’s no airport in Utica. It’s an hour-long drive from Utica to Syracuse in ideal conditions and yesterday’s conditions were far from ideal.

The bigger issue, however, is in Chicago.

The most direct route from Syracuse to California goes through Chicago O’Hare, but record-setting snowfall led to the cancellation or delay of hundreds of flights on Thursday night.

As a result, Baertschi might not get to Anaheim in time to get into the Canucks lineup for their game against the Ducks. The Canucks do have Adam Gaudette with them, so they won’t be short-handed, but Gaudette has played only a limited amount of time on the wing.

It’s the type of situation that leads to questions about the Canucks’ AHL affiliate. If they were located elsewhere, either on the west coast in the same time zone with the Canucks or in a location with an international airport, calling up players on a moment’s notice and getting them in the lineup in time would be less of an ordeal.

Bringing Baertschi up from the Comets is the right call, as he arguably never should have been sent down in the first place. Baertschi has produced like a top-six forward when he’s been in the lineup; the only issue is that injuries have frequently kept him out of the lineup.

The Canucks made the argument that the addition of more skill pushed Baertschi out of the lineup, and it’s been hard to argue with the results thus far. With the caveat that they haven’t had the toughest schedule to start the season, the Canucks certainly haven’t had any issue scoring goals.

Baertschi’s performance in the AHL suggests he’ll be able to keep the good times rolling for the Canucks offensively. Baertschi has been a beast with the Comets, tallying 10 points in 7 games.

With the Comets, Baertschi has primarily focussed on making everyone around him better, as 8 of his 10 points have been assists. Some of those assists have just been hard-work plays along the boards or in front of the net, but they also include a couple dandy dishes.

This little saucer pass to Reid Boucher after a clever spin at the blue line to shake his defender is a particularly nice assist.

Then there was this savvy veteran play, intentionally shooting for a rebound off the right pad to set up Francis Perron. Baertschi was looking for the pass the entire way.

Baertschi also had a couple goals in his time with the Comets, such as this perfectly-placed shot after Nikolay Goldobin sent him in all alone.

“Baertschi makes it look too easy,” said the play-by-play for his goal, and it’s probably because it was. Baertschi hasn’t been in the AHL since the 2015 playoffs, when he was second on the Comets in scoring with 15 points in 21 games, helping a low-scoring Comets team reach the Calder Cup Finals.

At this point, Baertschi has nothing to prove in the AHL, but he clearly didn’t spend any time sulking after his demotion to the Comets. Instead, he did everything he could to help the team win and help his teammates score.

Beyond his offensive accomplishments, Baertschi has been strong defensively for the Comets and shown no hesitation to engage physically, as doubly demonstrated by this backcheck against the Binghamton Devils.

If that was the main concern for the Canucks — that he was too hesitant to take contact after his concussion last season — that hasn’t been an issue for Baertschi with the Comets. Baertschi has been hard on the forecheck, won puck battles along the boards, and engaged physically in the defensive end.

Now it just remains to be seen if Baertschi can out-battle the weather to get into the Canucks lineup.

EDIT: Baertschi arrived just in time to take part in the Canucks' morning skate, but only as an extra, doing solo drills while the rest of the team did line rushes. It's unlikely he'll get in the lineup on Friday night against the Ducks.