Injuries are unavoidable in an NHL season, even if it seems the Canucks have had more than their fair share over the years. November is around when those injuries start to crop up, as the wear and tear of the season begins to set in.
Nov 13, 2019 1:57 PM By: Daniel Wagner 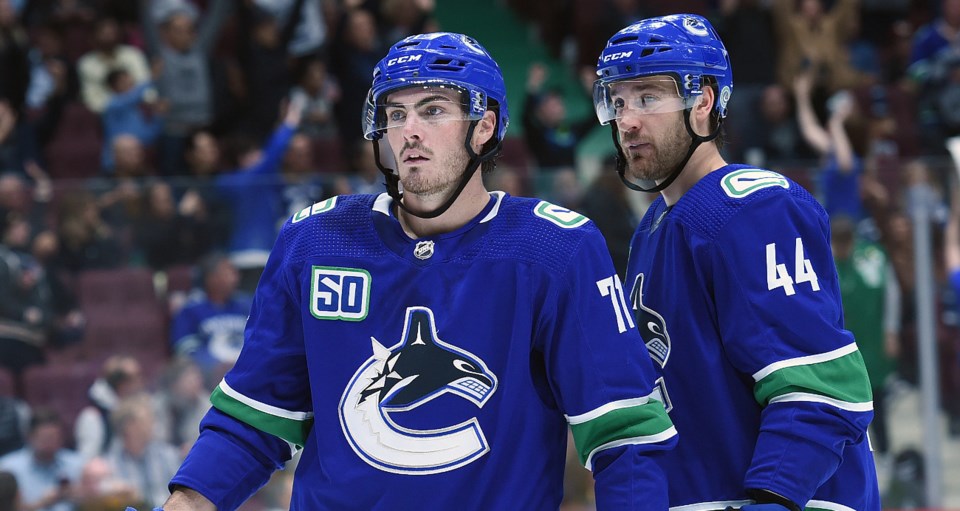 Zack MacEwen and Tyler Graovac line up for a preseason game with the Canucks.Dan Toulgoet / Vancouver Courier

Injuries are unavoidable in an NHL season, even if it seems the Canucks have had more than their fair share over the years. November is around when those injuries start to crop up, as the wear and tear of the season begins to set in.

That’s likely part of the reason the Canucks have had such a lousy record in the month of November in recent years, as injuries have exposed their lack of depth. The Canucks have to hope that their improved depth this season will be enough, as the injuries are beginning.

The first significant injury of the season appears to be to Brandon Sutter, who left Tuesday’s game with what appeared to be a non-contact injury, which is frequently a bad sign. Sutter pulled up while accelerating to go in on the forecheck, then skated gingerly to the bench. After a trip to the dressing room, he returned to test his legs, but was clearly frustrated after a few seconds and left the game for good.

According to Jim Benning, Sutter was assessed by doctors this morning with an update to come later today on his status. There is no word whether this might be related to his sports hernia surgery at the end of last season or a different issue, and the severity of the injury is as yet unknown.

Adding to the complications is Jay Beagle, who missed Tuesday’s game with an undisclosed ailment. The absence of both the Canucks’ bottom-six centres put a heavy strain on Bo Horvat, who had a career high 27:06 in ice time.

Benning said that Beagle was “day-to-day” and that there’s a possibility he could play on Thursday, but “if Beagle can’t go, we’ll have reinforcements.”

That doesn’t mean the Cheat Commando that goes by the name “Reinforcements,” but two call-ups from the Utica Comets: Zack MacEwen and Tyler Graovac.

Both MacEwen and Graovac make sense as call-ups to fill in on the fourth line. While the likes of Nikolay Goldobin and Reid Boucher have outperformed MacEwen and Graovac this season, the Canucks have a clear and distinct idea of where Goldobin fits in a lineup and likely want to keep Lind in the AHL for as much of the season as possible after last year’s struggles.

MacEwen, on the other hand, has paid his dues and is starting to get to an age where he needs to take the next step into the NHL soon if he has a legitimate NHL future. MacEwen has continually taken steps forward in his development in a way few other prospects coming through the Utica Comets have.

While MacEwen’s preseason was somewhat underwhelming and he hasn’t been a driving force for the Comets early in the season, he still has a lot of positive attributes. He has great size at 6’4”, strong skating to go with that size, and surprisingly good hands and a wicked shot.

He’s also committed himself to his play away from the puck and addressing the details that will hopefully make him an NHL player.

“I had Trent Cull tell me something my first year that stuck with me,” MacEwen said prior to the season. “He said, ‘Don't try to make five spectacular plays a game, do 20 ordinary plays spectacularly.’”

“I don't think I've even come close to my ceiling yet,” he added. “It’s all about just getting reps and more experience at each different level and using that experience to just work on details and little things in your game to keep improving, keep getting better every day.”

MacEwen had a four-game audition with the Canucks last season and didn’t look out of place. Now he’ll look to prove himself and stick with the Canucks for a longer stint. He has 8 points in 13 games in the AHL this season.

As for Graovac, he already has NHL experience under his belt, playing 62 games between the Minnesota Wild and Washington Capitals. At 26, he’s not exactly a prospect any more, but a depth forward in an area where the Canucks are a little shallow: centre.

In fact, with Graovac called up, every single player in their organization that is listed at centre and is playing pro hockey in North America is currently with the Canucks. There’s no one else left in Utica, though Lukas Jasek has been transitioning to centre this season.

Graovac was injured in the Comets’ first game this season, but returned in November. He has just one goal in six games.

Graovac proved that he can put up points at the AHL level last season and he’s got size to spare at 6’5” and 200+ lbs. The question is whether his skating and defensive play will hold up against the speed of the NHL.

A tap of the stick to the indispensable Comets Harvest for the clips.

Taking two big forwards out of Utica certainly won’t help the Comets, who have been on a slide since the call-up of Sven Baertschi and an injury to Reid Boucher. The Comets won eight straight in October to start the season, but have dropped five of six games in November, all without Baertschi.