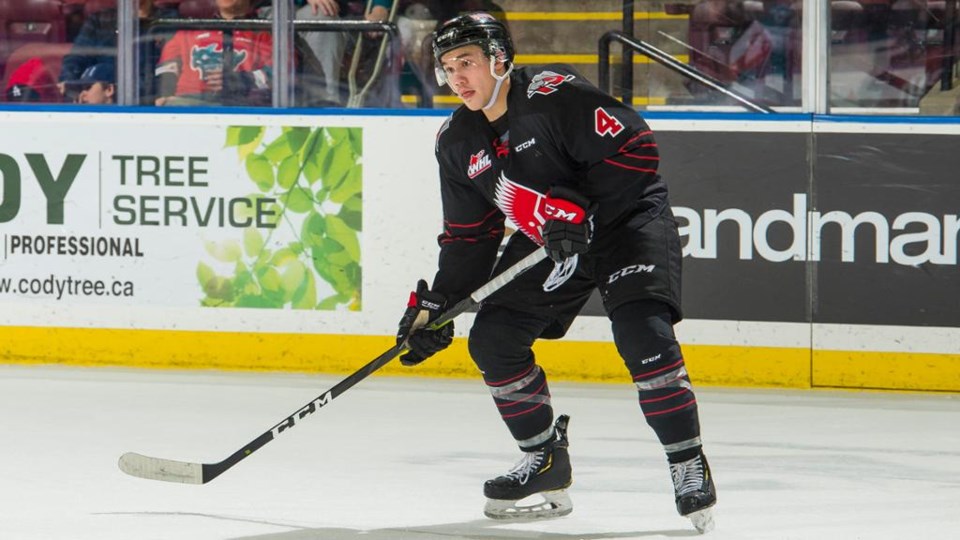 The Vancouver Canucks started training camp with 64 players listed on their roster. By the start of the regular season in two weeks, they have to get that number down to 23, so the Canucks need to make some significant cuts.

As Cat Stevens once said, the first cut is the deepest. On Tuesday, the Canucks made a deeper cut than “Julie” by David Bowie, reducing their pre-season roster by nearly a third.

18 players were cut, including one of the team’s top prospects on defence, 2018 second-round pick Jett Woo.

As always, PITB is here to break down the Canucks’ camp cuts as they near their opening night roster. At this point in the process, the cuts are pretty easy to understand, but let’s go through them to make sure there are no big surprises.

First up are the players that have been assigned to the Utica Comets. This group largely consists of players that do not have contracts with the Canucks, but have AHL deals with the Comets, which means they didn't have a shot at making the team. But there are a couple exceptions, notably two legitimate prospects: Mitch Eliot and Jake Kielly.

Mitch Eliot was signed as a free agent out of the OHL back in December, boosting the Canucks’ prospect depth on the right side of their defence. At the time, Eliot was fifth among OHL defencemen in scoring, though he slipped to 11th by the end of the season.

Eliot is a well-rounded defenceman taking his first step into professional hockey, so getting him into camp with the Comets earlier rather than later is a good idea to get him off to a strong start. While he’s a long-shot prospect, he did manage to make an impression on Monday, scoring the Canucks’ first goal of the preseason with a shot from the point that slipped through Cam Talbot.

Hands up if you had Mitch Eliot scoring the first #Canucks pre-season goal! He cuts the Flames lead to 2-1 in Calgary in the 3rd period, while in Victoria, Vancouver trails 2-0 in the 2nd. pic.twitter.com/BlAP3UWjb3

The Canucks signed Jake Kielly in April, adding to the goaltending depth in their prospect pool behind Thatcher Demko and Michael DiPietro. Kielly was a finalist for the Mike Richter Award for the best goaltender in college hockey, after posting a .928 save percentage and 1.92 goals against average in his junior year.

Kielly is already 23, so he’s a little further on in his development than DiPietro, but that also means he has less room to improve. He’s got good size and athleticism, but needs to refine his technique. He’ll likely start the season in the ECHL and will hopefully get plenty of starts.

Here are the rest of the players assigned to Utica:

Along with the players assigned to the Comets, four Canucks prospects were sent to the CHL to report to their junior teams: Jett Woo, Ethan Keppen, Carson Focht, and Arturs Silovs.

The explanation for these four cuts is pretty simple: they have no chance of making the Canucks out of camp and their junior seasons start this week. They were the only Canucks prospects out of the CHL that were at camp this year, so they sent them back to their teams so they can get off to a strong start in junior.

Jett Woo is the Canucks’ top prospect on the right side on defence and is preparing for a big season with a new team. Woo was traded to the Calgary Hitmen this season and will get the opportunity to play for a contender and hopefully compete for the Memorial Cup.

Woo took a step forward last season, adding some high-end offence to go with his old-school, physical defensive game. He recorded 66 points in 62 games, good for fifth among WHL defencemen in scoring. While Woo still projects more as a steady defensive defenceman, who throws some crushing hits, the offence shows that he has the puck skills to potentially do more.

Woo will join Carson Focht with the Hitmen. Focht, selected in the fifth round this year in his second year of draft eligibility, impressed the Canucks’ brass in development camp and prospect camp this year, particularly Ryan Johnson.

“He made a really big impression on me at development camp,” said Johnson. “He's got a great skating stride, he's got a powerful foundation, and he's got some snarl to his game, which I love. Got a great skill set. So, he's a guy that jumped off the page for me, right out of development camp.”

Focht needs to build off last season, when he had 64 points in 68 games, and prove that he can be a great prospect for the Canucks. There’s a chance he even plays for Team Canada at the World Juniors.

Ethan Keppen is an interesting prospect for the Canucks, as he had so little support with the Flint Firebirds last season, but still scored 30 goals. He did enough to get drafted by the Canucks in the fourth round this year.

Heading into his draft+1 season, it would be great to see stronger skating and a little more creative playmaking to go with his powerful north-south game. He should have a stronger team around him this year, which should help.

Arturs Silovs was the first of the Canucks’ 2019 draft picks to earn a contract, which was a bit surprising. The Latvian goaltender inked a three-year entry-level contract in August.

After playing in the Riga system in Latvia for years, the 6’4” goaltender will play for the Barrie Colts in the OHL this season. The Canucks might be able to keep tabs on Silovs a little more easily with him in North America and provide him with the goaltending coaching that he’s been missing for much of his career thus far.

Finally, there was one other cut: the wonderfully-named Will Warm was released from camp.

Warm is an undrafted, unsigned free agent, who is heading back to the WHL for his over-age season. The 20-year-old defenceman will be playing for the Victoria Royals this year and needs to make a significant improvement from his two assists last season. He has a solid defensive game and can handle the puck, but this will be a key season for him as he looks to earn an NHL contract.

On the plus side, Warm is a pretty great guy. He was named the WHL’s Humanitarian of the Year last season, getting the Doug Wickenheiser Memorial Trophy for his work in the community in Edmonton, where he played with the Oil Kings. He made the most of his name with the “Will Warms the Community” initiative, where he made weekly visits to the local Ronald McDonald House.

That’s the kind of character the Canucks like to see and the embrace of puns that I like to see.