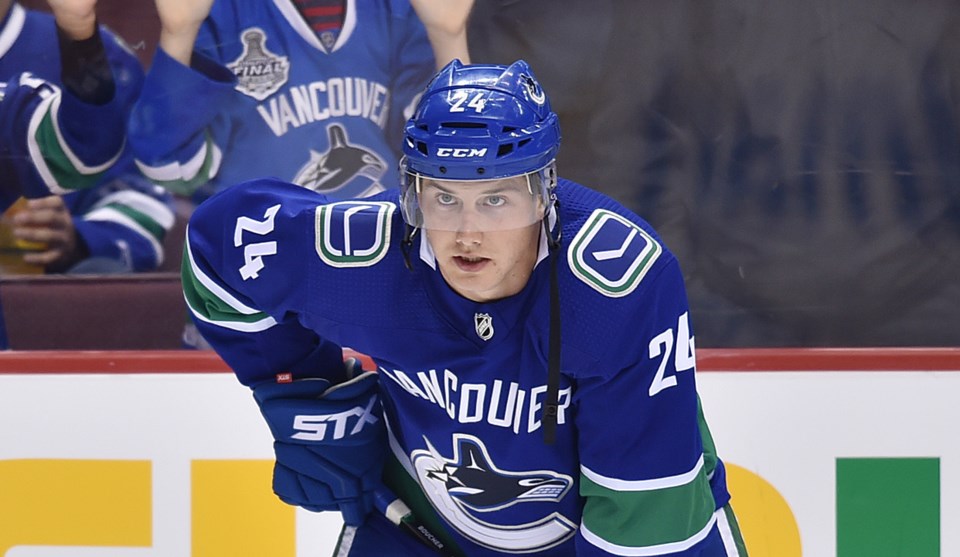 The Canucks’ first game of the 2019-20 season is just over a week away. That means they don’t have much time to pare down their roster to 23 players. Pretty soon, the Canucks will have to make some difficult decisions about who stays with the team and who gets sent across the continent to play for the Utica Comets in the AHL.

Before those difficult decisions, however, the Canucks were able to make a few more easy ones, putting four players through waivers on the weekend: Reid Boucher, Francis Perron, Ashton Sautner, and Zane McIntyre.

All four players were expected to start the season in the AHL and should be significant players for the Comets this season, so there are no surprises here. The four cuts bring the Canucks preseason roster down to 31 players (plus Antoine Roussel), meaning the team needs to cut eight more players before the start of the season.

Before getting into the current state of the Canucks’ roster, let’s break down this most recent round of cuts. Why didn’t these players have a shot of making the Canucks’ opening night roster and could we still see them in the NHL this season?

Let’s start with Reid Boucher, who is coming off a career year with the Comets last season. Boucher set new Comets records for goals and points with 31 goals and 62 points in 56 games. Among AHL players with at least 40 games played, Boucher was first in goals-per-game and third in points-per-game.

That’s the issue, however: he played a lot of AHL games. Boucher has never been able to stick in an NHL lineup for any significant length of time, despite an NHL-caliber shot and some other good tools. At 26, he’s settling into Jason Krog territory: AHL All-Star that can’t break through in the NHL.

Boucher was put in position to succeed in the preseason, including lining up alongside Elias Pettersson and Micheal Ferland in place of Brock Boeser, but didn’t do much with that opportunity.

Still, he’ll be a key contributor to the Comets and is likely to once again lead them in scoring. If the Canucks face injury troubles and need help in the top-six and on the power play, perhaps he’ll get another NHL chance this season.

Francis Perron was an intriguing acquisition for the Canucks, costing them nothing more than Tom Pyatt and a bump from the sixth round to the seventh round at the 2019 draft. In those late rounds of the draft, the value between picks is negligible, while Pyatt was on an expiring contract and signed in Sweden, so the Canucks essentially got Perron for free.

It was a savvy little move, as Perron still has some intriguing potential. At the very least, he should provide some offence for the Utica Comets: he had 47 points in 63 games for the San Jose Barracuda last season, thriving once he got away from the Ottawa Senators system.

Perron was a longshot to make the Canucks out of camp and was completely unnoticeable in the preseason, which isn’t ideal. He’s a good bet to start the season at left wing on the second line in Utica, behind Boucher, and could be a call-up option with a strong start to the season. Since the Canucks are already well aware of what Boucher brings on the ice, it’s possible that Perron could get called up ahead of him, depending on the holes in the lineup.

Ashton Sautner has already shown that he can be a safe, reliable depth option for the Canucks, but didn’t do enough in training camp and preseason to earn a spot on the roster as the seventh or eighth defenceman. In fact, he was a little shakier defensively in the preseason than you would expect from someone who played 17 NHL games last season.

Now the question for Sautner is whether he can avoid getting passed on the defensive depth chart on the left side. He’ll be competing with Olli Juolevi, Guillaume Brisebois, and Josh Teves, both for ice time in Utica and to be a call-up option for the Canucks when injuries strike.

That’s tough competition. Juolevi is the Canucks’ top prospect on defence with Quinn Hughes graduating to the NHL, the Canucks are high on Guillaume Brisebois, and Josh Teves has a well-rounded game with a little more offensive upside than Sautner. For the time being, Sautner is likely ahead of Brisebois and Teves, and should be on the Comets' second pairing, though Brisebois is still with the Canucks in the preseason and Sautner isn’t.

Whether Sautner gets called up by the Canucks this season will likely depend on what they need at the time. If they’re looking for a steady defensive presence, Sautner could get the call ahead of his more offensively-capable counterparts.

Finally, there’s Zane McIntyre, one of seven Canucks goaltenders signed to an NHL contract this season. That’s tied for the most in the NHL with the Anaheim Ducks, though it should be noted that the Canucks only have six playing professional hockey, with Arturs Silovs playing in the OHL. The Ducks have all seven of their signed goaltenders playing in the NHL, AHL, and ECHL, which seems unwieldy.

Most NHL teams have five goaltenders signed to a contract, while a few have six, which is pretty much equivalent to the Canucks’ situation. The Colorado Avalanche have the fewest goaltenders signed to NHL contracts, with three. That seems unreasonably risky, and they’ll have to be careful to avoid running out of goaltenders, which is the situation that likely led to the Canucks signing so many heading into this season.

McIntyre has a pinch of NHL experience, playing eight games for the Boston Bruins in the 2016-17 season, but has spent most of his professional career in the AHL. He’s been on a decline over the last couple seasons, but should still be a solid starter for the Comets and a depth option for the Canucks in case of injury.

Jim Benning should be very familiar with McIntyre. He was drafted by the Bruins in 2010, when Benning was Assistant GM of the Bruins, and he would have kept an eye on McIntyre’s development for four years after that in the USHL and NCAA before Benning was hired by the Canucks.

It will be very interesting to see how the Canucks handle their goaltending situation in the minors. McIntyre makes sense as the starter in Utica, but they also have veteran Richard Bachman and prospects Michael DiPietro and Jake Kielly. Will the prospects head to the ECHL or will they compete for starts in Utica with the veterans?

I only wish that when McIntyre gave up four goals on 21 shots in his preseason start in Salt Lake City, I used the phrase, “Put a cork in it, Zane!” to suggest that he stop allowing so many goals. We all have regrets.