Canucks defenceman Troy Stecher is starting from the bottom once again

Steady blueliner getting minimal minutes to start the season.
Oct 10, 2019 8:49 AM By: Daniel Wagner 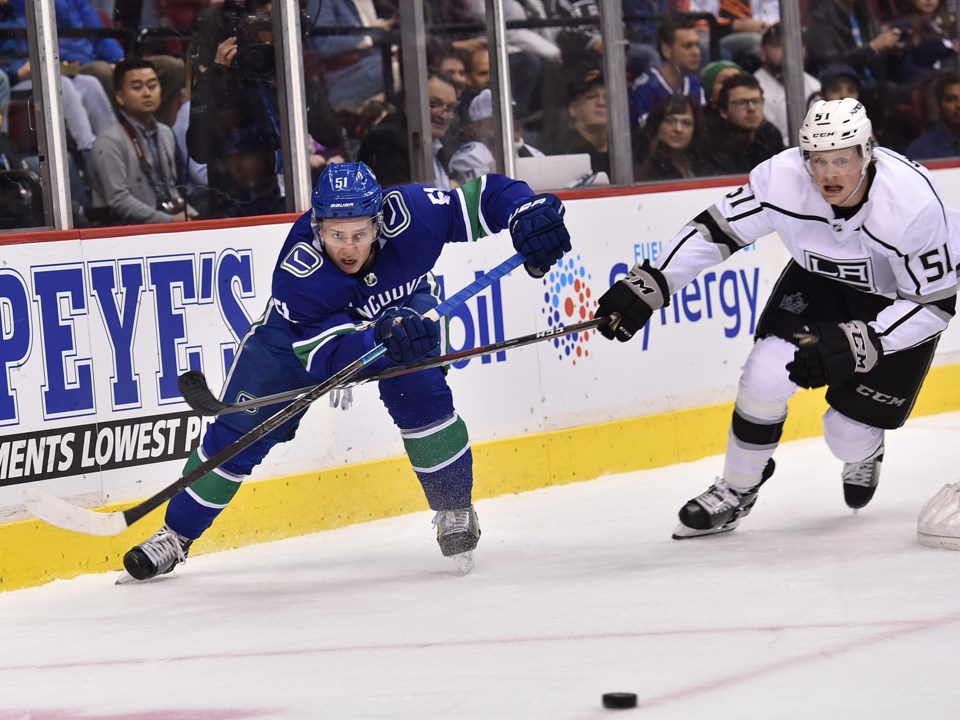 Every single season, it seems Troy Stecher needs to prove himself again as an NHL defenceman.

It started in his rookie season, when he was a standout in the 2016 preseason, clearly demonstrating that he belonged in the NHL, but still got cut and sent to the Utica Comets in the AHL. He didn’t stay long: Stecher played just four games with the Comets before a Chris Tanev injury necessitated a call-up. Once back in the Canucks’ lineup, Stecher quickly proved that he belonged there.

More than that, Stecher was named the team’s best defenceman at the end of his rookie season after leading all Canucks defencemen in scoring and providing reliable defence in his own zone. In a dreadful season — the Canucks set a new franchise low in goalscoring — Stecher provided one of the few positive signs for the future.

In his second season, however, Stecher had to prove himself all over again to a new head coach: Travis Green. To start the 2017-18 season, Stecher was back on the third pairing, averaging around 16 minutes in ice time per game over his first 20 games.

As the season progressed, Stecher earned his way up the lineup, finishing the season back on the top pairing with Alex Edler. This was partly because of injuries — Tanev was once again out of the lineup — but also because Stecher proved himself as a legitimate top-four defenceman. Over the final ten games of the season, Stecher averaged over 22 minutes per game, including a high of 27 minutes in a late-season game against the Edmonton Oilers.

That’s why it was surprising to see him start the 2018-19 season back on the third pairing, averaging the lowest ice time among Canucks’ defencemen over the first half of the season, with limited time on special teams. Stecher was even a healthy scratch for a game in November, which didn’t sit well with the pride of Richmond, BC.

“You’re never happy when you come out of the lineup, you’re pretty pissed off, doesn’t matter who you are,” said Stecher at the time. “You come back in, you definitely want to make a statement that you belong in the lineup.”

He certainly did make a statement: over the back half of the season, Stecher led the Canucks in ice time and was trusted as one of the team’s top penalty killers. While injuries gave Stecher the opportunity to play more minutes, his play on the ice showed that he deserved those minutes.

It certainly looks like a pattern: Stecher starts each season in a depth role and finishes each season on the top pairing. Then, at the start of the following season, Stecher finds himself back at square one.

The pattern is repeating itself this season. In each of the Canucks’ first two games of the 2019-20 season, Stecher played less than 11 minutes for the first time in his career, excepting two games where he got injured early in the game. Stecher is yet again on the third pairing to start a season and playing less than ever.

He’s a victim of circumstance: the newly-signed Tyler Myers is on the top pairing with Alex Edler, while the steady Chris Tanev has been matched with rookie Quinn Hughes, who has played big minutes early on. That leaves Stecher with Jordie Benn.

Even if Stecher is on the third pairing, it seems like defence coach Nolan Baumgartner could spread the minutes around more evenly than he has so far. The Canucks are loath to use forwards on both the power play and penalty kill; perhaps they should do the same with Myers, who has historically not been good shorthanded. That way, Stecher could play a larger role before he (seemingly inevitably) gets promoted to the top pairing by the end of the season.

Green addressed the ice time of the third pairing after Wednesday’s game, in which Stecher was bumped up to a more reasonable 16:27 in ice time.

“Baumer and I talked about it,” said Green. “They need to play some more minutes and I don’t think the norm is going to be where they’re at. They’re both capable of playing a lot more and I’m sure we’ll see that as we go.”

.933 - Canucks prospect goaltender Arturs Silovs is off to a strong start in the OHL this season. The 2019 sixth-round pick has a .933 save percentage in his first three games with two wins and his only loss coming in the shootout.

A tap of the stick to the Canucks for nailing the in-arena presentation at their home opener. The pre-game show could not have been any better. Along with bringing out great Canucks from past decades, like Dennis Kearns and Todd Bertuzzi, one of the highlights was an awesomely over-the-top video where the Canucks played an epic game of hockey against zombies or White Walkers, like Game of Thrones-on-ice.

A tap of the stick to Alex Biega, who was traded to the Detroit Red Wings this week. Biega was well-loved in the Canucks locker room and deserves NHL ice time that he just wasn’t going to get in Vancouver. All the best to the Bulldog as he continues his career in the Red Wings organization.