For over a month, the Canucks have been in the precarious situation of having just three healthy goaltenders on an NHL contract, with one of them being 19-year-old Michael DiPietro.
Feb 12, 2019 2:08 PM By: Daniel Wagner 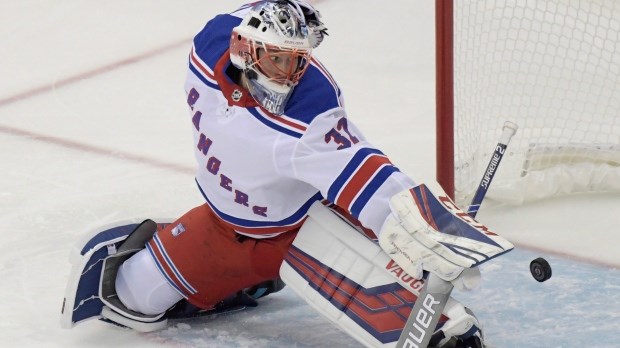 For over a month, the Canucks have been in the precarious situation of having just three healthy goaltenders on an NHL contract, with one of them being 19-year-old Michael DiPietro. On Monday, that number contracted to one: with Thatcher Demko already out with a knee injury and Jacob Markstrom experiencing “lower body tightness,” DiPietro was forced into action. It went poorly.

On Tuesday, the Canucks addressed their goaltending depth by acquiring Marek Mazanec from the New York Rangers for the Canucks’ 7th-round pick in 2020. While it may have come a day too late, it at least gives the Canucks a little more flexibility for the rest of the season.

Mazanec is 27 and has a pinch of NHL experience, playing in 31 games with the Nashville Predators earlier in his career. He’s currently signed to a one-year, two-way deal at a league-minimum $650,000 in the NHL and $200,000 in the AHL.

In his 31 NHL games, Mazanec has an underwhelming .895 save percentage and he’s been below-average in the AHL this season with a .903 save percentage in 20 games. With that in mind, there’s little reason to believe he has much upside for the Canucks, but he does check a couple boxes with his experience, cost to acquire, and waiver eligibility.

Since Mazanec cleared waivers earlier this season with the Rangers, he still has 20 waiver-exempt days remaining. That means he can join the Canucks and back up Markstrom (or start ahead of DiPietro) and easily go back to the AHL when Demko returns to action.

While Mazanec wouldn’t be a likely candidate to get claimed, neither was Mike McKenna, who the Philadelphia Flyers claimed from the Canucks to exacerbate this entire situation. Mazanec’s waiver-exempt status at least gives the Canucks some assurance this season.

The Canucks had an extra 7th-round pick in 2020 that they acquired from the Ducks in the Michael Del Zotto trade, so the cost certainly wasn’t prohibitive. It does raise the question of why they chose to trade a pick at all instead of signing a free agent or AHL goaltender. Patrick Johnston of The Province listed a few AHL goaltenders they could have pursued: Jeremy Smith, Chris Driedger, Jamie Phillips, or Ken Appleby.

There’s also Michael Leighton, currently on a PTO in Utica. He’s older and not a great goaltender at this point in his career, but he has a .912 save percentage in his four games with the Comets this season. At the very least, signing him would provide some veteran experience in an emergency situation like Monday.

Spending a 7th-round pick on a depth goaltender isn’t a big deal, of course. It’s frustrating that it took this long for the Canucks to address their goaltending depth, but at least they made a move and it came at a low cost.

It’s possible that Canucks fans will see Mazanec in action on Wednesday against the Anaheim Ducks if Markstrom isn’t ready to play. That would be the Canucks’ sixth goaltender to play this season, a new franchise record.