Canucks have their eyes on three right-handed college defencemen

The Canucks’ biggest gap in their prospect system is on the right side on defence . The team has just two right-handed defencemen under 22 in their system: Matt Brassard and Jalen Chatfield.
Feb 5, 2018 3:39 PM By: Daniel Wagner 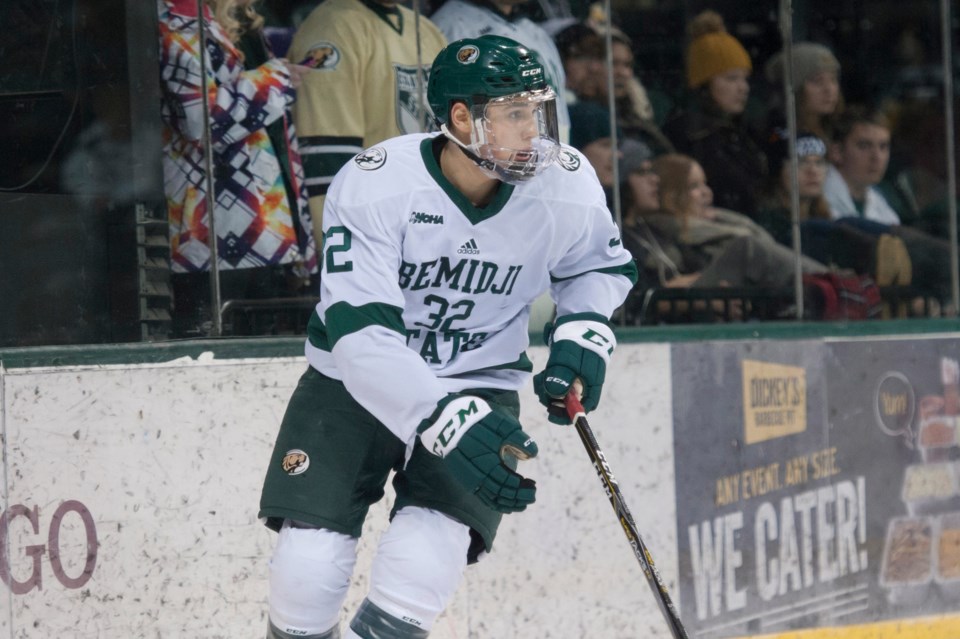 The Canucks’ biggest gap in their prospect system is on the right side on defence. The team has just two right-handed defencemen under 22 in their system: Matt Brassard and Jalen Chatfield.

Brassard is intriguing — a 7th-round pick who is 7th among OHL defencemen in goalscoring — and Chatfield impressed in the preseason, but a prospect pool needs more depth than that. In addition, Troy Stecher is the team’s only right-handed defenceman under 25, the 26-year-old Erik Gudbranson ought to be traded, and the 28-year-old Chris Tanev has struggled to stay healthy. There is cause for concern on the right side, even if Derrik Pouliot has been a capable fill-in at times this season.

Signing free agents out of college hockey is a great way to provide a boost to a prospect system without spending assets in a trade or a pick in the draft. The Canucks have had pretty good luck with free agent defencemen out of the NCAA: two of their current right-handed defencemen, Chris Tanev and Troy Stecher, came to the Canucks by that route.

Lots of NCAA Free agents. I'm hearing the #Canucks have interest in Quinnipiac defenseman Brogan Rafferty and Princeton forward Max Veronneau who has been nominated for this year's Hobey Baker award.

2 players the #Canucks are tracking as the NCAA season winds down, defenseman Brady Keeper at U of Maine and D Zack Whitecloud at Bemidji State University. Whitecloud was on the radar for the CDN Olympic team.

The lone forward in the group, Max Veronneau, is an intriguing player. He’s currently fifth in points-per-game in the NCAA, just a little behind Canucks prospect Adam Gaudette. He’s already 22, so has less room to grow and develop than a younger prospect, but it’s understandable why the Canucks would have interest.

But the defencemen are the most intriguing, because of the clear pattern. There are other sought-after free agent defencemen in the NCAA that the Canucks could be interested in — Daniel Brinkley, Josh Teves, and Jimmy Schuldt come to mind — but they’re left-handed shots. It’s not that the Canucks don’t need left-side defencemen and they may still show interest in the months to come, but the team lacks both high-end prospects on the right side and good depth.

Let’s take a look at these three defencemen.

Let’s start with Brogan Rafferty, who unfortunately shares a name with one of the infamous Craigslist Killers. It was a big enough problem that an Ohio news station actually used his photo for a report on the murder investigation.

This Brogan Rafferty is a 22-year-old sophomore at Quinnipiac University. The 6’2” defenceman has put up respectable, but not spectacular, numbers in his second year after finishing second among freshman defencemen in points last season. With 12 points in 28 games this year, Rafferty is barely in the top-100 in the nation in scoring among defencemen.

A late-bloomer, Rafferty was 5’8” at 16 Rafferty played forward until his senior year of high school, when he switched to defence. Accordingly, he’s considered a puck-moving defenceman, with high-end skating ability and good offensive instincts.

He has the first and fourth goals in the highlight package below from Quinnipiac’s most recent game. The first is a slap shot one-timer from the point and the second is scored from right in front of the net, which might give you an idea of his willingness to jump up in the play.

While Rafferty got more attention from NHL scouts last year because of his prodigious freshman season, there could be some untapped upside there. He’s getting fewer points on the power play this season, but is scoring at about the same rate at even-strength.

Next up is Brady Keeper, a 21-year-old freshman with the University of Maine. With six goals and 15 points in 28 games, the 6’2” rearguard is tied for fourth in goals and tenth in points among freshman defencemen, though he’s a little older than your typical freshman.

He has three misconduct penalties and a game misconduct this year, and many of his penalties are what you might call “aggressive” penalties, for interference, elbowing, and roughing. That aggressive side of his game was there in junior as well, as he had a whopping 202 penalty minutes in 58 MJHL games in 2015-16.

Keeper also has skill, however, and can rush the puck effectively. He was second among defencemen in points during his final season in the MJHL and was third in scoring among all players in the 2017 MJHL playoffs.

He’s been a key player for the University of Maine, where he’s averaging 2.43 shots per game and is a plus-12, for whatever value you assign to plus/minus.

You can see some Keeper highlights, including a goal jumping up in the rush at the 3:00 mark, in this video from Maine’s game against Northeastern University, with the added bonus of two goals, an assist, and some nice puckhandling from Adam Gaudette.

Keeper’s head coach, Red Gendron, describes him as “a very good two-way defenseman” who has “a great shot,” while his defence partner praises his play in the defensive zone and calls him “a hard-nosed player.” Assistant coach Alfie Michaud adds that Keeper is a “cerebral player,” who “gets things quickly.”

If the Canucks are looking to add a defenceman who packs some snarl to go with his skill, Keeper seems like he’s worth a look.

Finally, there’s Zach Whitecloud, another 6’2” right-handed defenceman. After a strong rookie season that got him invited to 29 different NHL development camps, the 21-year-old sophomore got even more eyeballs directed his way when Hockey Canada considered him for the Olympics.

Whitecloud played for Team Canada at the Karjala Cup, one of the tournaments Hockey Canada used to decide on their Olympic lineup. He had an assist in his two games at the tournament but was left off the final roster.

According to Corey Pronman, Whitecloud is one of the players getting the most NHL attention, while his local newspaper reports no less than Steve Yzermand and Rob Blake have come in person to talk to the young defenceman. It’s clear the Canucks will have plenty of competition for Whitecloud.

His head coach, Tom Serratore, breaks down why Whitecloud has received so much attention:

“He’s got a good, balanced skillset,” Serratore said. “He has good depth to his game, good size, good puck skills, shoots the puck extremely well, good defender. Zach Whitecloud’s biggest strength is probably that he has no deficiencies.

“If you want to sit there and analyze every shift, he’s doing something different every shift. That, to me, is a sign of a pretty good defenseman.”

Whitecloud has a good shot, but his point totals are relatively modest. He has three goals and 14 points in 28 games this season. Here’s another of those three goals, as he kicks the puck up to his stick and roofs a wrist shot around the 0:55 mark of the video.

The next day he had a two-point night, scoring a goal at the 0:28 mark of the video below, and also adding an assist.

While Whitecloud appears to be the most highly-sought player of these three defencemen, all three are intriguing options for improving the Canucks’ depth on the right side.