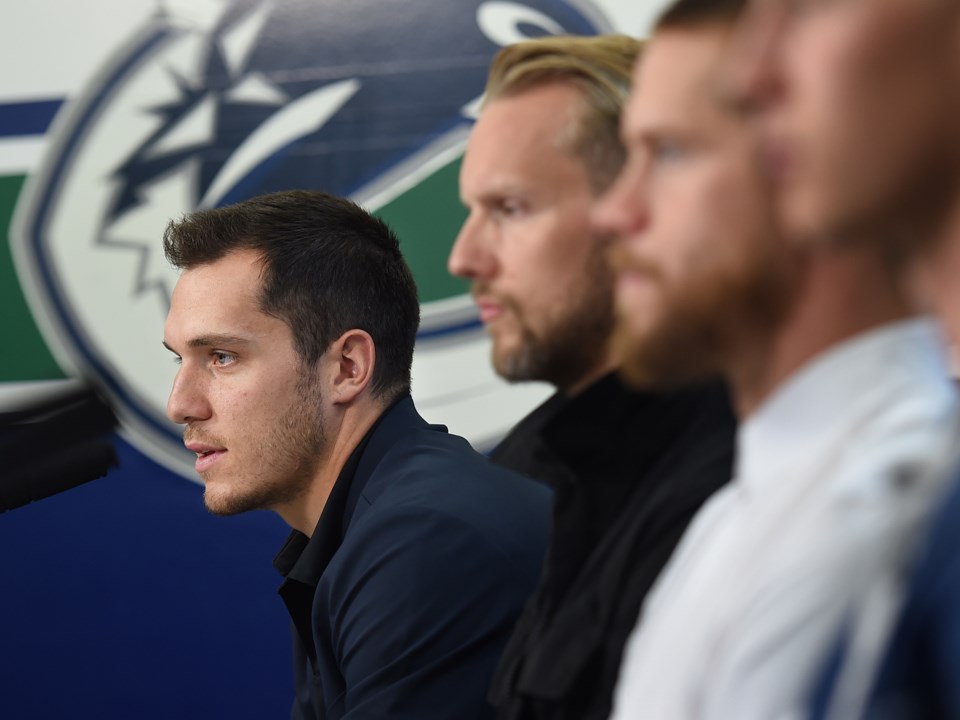 According to head coach Travis Green, the Canucks held off on practicing the power play until Brock Boeser was signed. The delay in practicing special teams isn’t unusual — he suggested they might have waited just as long even if Boeser was signed before camp — but his absence made it easier to wait.

Once Boeser was signed, however, they went to work on both sides of special teams, with assistant coaches Newell Brown and Nolan Baumgartner taking on the power play and penalty kill, respectively.

While the Canucks tried some different combinations in the first few preseason games, their practice on Friday saw two distinct power play units, with both featuring some surprising combinations. The first unit had Elias Pettersson and Brock Boeser in their usual spots on right and left boards, but everyone else was a new addition.

Bo Horvat, a staple of the top unit last season, was moved to the second unit. In his place, J.T. Miller played in front of the net. In the bumper spot in the middle was Josh Leivo, possibly a placeholder for Micheal Ferland, who missed the practice due to illness. In place of the incumbent Alex Edler at the point, Quinn Hughes quarterbacked the fist unit.

Horvat centred a second unit that featured two defencemen, Tyler Myers and Alex Edler. Tanner Pearson took the net-front role and two skilled playmakers — Sven Baertschi and Nikolay Goldobin — took turns as the bumper in the middle. The second unit was still in a 1-3-1 formation: with Horvat on the right side and Myers on the left, providing one-timer options with Edler at the point.

We didn’t exactly get to see these two power play formations in action on Saturday night in Salt Lake City — Miller, Horvat, Baertschi, and Ferland were all scratched — but it would make a lot of sense for the Canucks to start with something very close to these two units to start the season.

While Canucks head coach Travis Green is quick to tell reporters not to jump to conclusions about practice and preseason lines, he’s also talked about trying to find the right combinations early. It’s a big boon to find chemistry prior to the start of the season so the team can hit the ground running on opening night.

That’s particularly true for the power play, where so much depends on knowing where your teammates are and will be in order to gain the offensive zone, create quick passing plays for scoring chances, and regain the puck when it’s lost. That can only come with repetition, so finding the right combination of players early on is important.

So, let’s jump to some conclusions and extrapolate from these initial practice sessions for the power play.

It’s gratifying to see Quinn Hughes already being given a shot at earning his spot on the first power play unit. Canucks fans will recall Brock Boeser having to wait to get an opportunity on the first unit in his rookie year, despite the team struggling with the man advantage to start the season.

Pettersson didn’t have to wait in his rookie season and it looks like Hughes won’t have to either. It makes sense: the Canucks have been missing a true power play quarterback at the point, even if Alex Edler has been serviceable and perhaps even underrated in the role.

Hughes can help the power play in multiple areas. His elite skating ability will help make gaining the offensive zone and getting set up a lot easier, as well as create some more motion at the top of the power play to create problems for opposing penalty kills. His crisp passes will set up Boeser and Elias Pettersson for one-timers, as well as just keep the puck moving around the zone.

Most importantly, his offensive creativity will provide a new wrinkle compared to the more simple game that Edler brought to the power play.

Still, the challenge facing Hughes should not be understated. As good as Hughes was in college hockey, quarterbacking an NHL power play is a difficult assignment. Is he up to the task?

The other big change is moving Bo Horvat to the second unit. There are both pros and cons to this move.

One of the clear cons is that Horvat is one of the Canucks’ most effective point producers with the man advantage. Over the past three seasons, Horvat has the fourth-highest goal-scoring rate at 5-on-4, behind Sven Baertschi, Elias Pettersson, and Brock Boeser. He’s also fourth in point rate at 5-on-4, at least among active Canucks: including Thomas Vanek and Daniel Sedin bumps Horvat down to sixth.

Generally speaking, you want your top point producers on the first unit, as that’s the unit that gets the most ice time. Newell Brown is very familiar with this concept, of course. He was initially ridiculed for his decision to move Ryan Kesler to the first power play unit all those years ago, as it cannibalized an effective second unit to put all of the Canucks’ eggs in one basket. Fortunately, it was an exceptionally good basket.

A big pro, then, is that Horvat would immediately be a boon to a second unit that has struggled to contribute over the last few seasons. Horvat can win faceoffs to establish possession and provide both playmaking and goal-scoring.

The second unit has lacked an identity: building a new second unit on the back of Horvat, not to mention two effective power play defencemen in Alex Edler and Tyler Myers, immediately makes it a legitimate scoring threat.

Another pro is that moving Horvat might actually be putting the Canucks’ best power play eggs in one basket. The Canucks newest additions at forward, J.T. Miller and Micheal Ferland, come with some significant power play pedigree.

Here are the current Canucks forwards that have played at least 50 minutes at 5-on-4 over the last three seasons, and their point-production rates in that time.


Over the last three seasons, Miller has scored goals at about the same rate as Horvat on the power play, but produced points at a much higher rate, albeit on a much more deadly Tampa Bay Lightning power play. He can finish down low in front of the net, but also has a playmaker’s vision and touch, which opens up passing options.

Miller also provides another faceoff option to go with Pettersson.

Meanwhile, over the last three seasons, Micheal Ferland has scored goals at the 14th highest rate in the NHL among players that have played at least 100 minutes at 5-on-4. His 2.72 goals per 60 minutes is better than any other Canuck. Ferland uses the quick release on his shot to good effect on the power play, but also scores dirty goals, banging away at rebounds on top of the crease.

Obviously, opportunity plays into these numbers. The Lightning had the best power play in the NHL last season, and the talent Miller got to play with certainly had an impact on his assist rates. It should be mentioned, however, that the Calgary Flames and Carolina Hurricanes’ power plays, on which Ferland featured, were not actually that good. The Hurricanes were 20th in the NHL last season and the Flames were 28th the season before that.

In any case, looking at the Canucks’ first power play unit from Friday, we find three of their top point-producing forwards and, assuming Ferland takes Leivo’s place, their top goal-scorer. That makes a lot of sense as a selection of four forwards to go with Hughes on the first unit.

There’s a possibility that Leivo sticks on the first unit, however, with Ferland playing the bumper role on the second unit. We’ll have to see how that plays out heading into the season, but Leivo’s production on the power play over the last three seasons leaves something to be desired. Perhaps an opportunity on the first unit would change that.

On the second unit, we see their second-most efficient goal-scorer in Sven Baertschi, who is also their fourth-most efficient point-producer. Horvat is fifth and Goldobin seventh in point rate at 5-on-4.

The one odd-man out is Tanner Pearson. Pearson’s power play production over the last three seasons is right in line with that of Loui Eriksson, which doesn’t exactly boost anyone’s confidence.

The power play has never been Pearson’s bread and butter, with a career high of eight power points back in the 2016-17 season. We’ll see how effective he can be as the net-front presence and if he can improve on his paltry power play numbers.

What’s eminently clear, however, is that the Canucks have plenty of power play options, enough to create two strong units. It’s also clear that bumping Horvat to the second unit makes sense in multiple ways: the addition of Miller and Ferland means the first unit should still be effective, while Horvat can significantly improve the second unit.

With these options at the Canucks’ disposal, fans should see a step up from last season’s 22nd-ranked power play, which could be the difference between winning and losing on some nights.