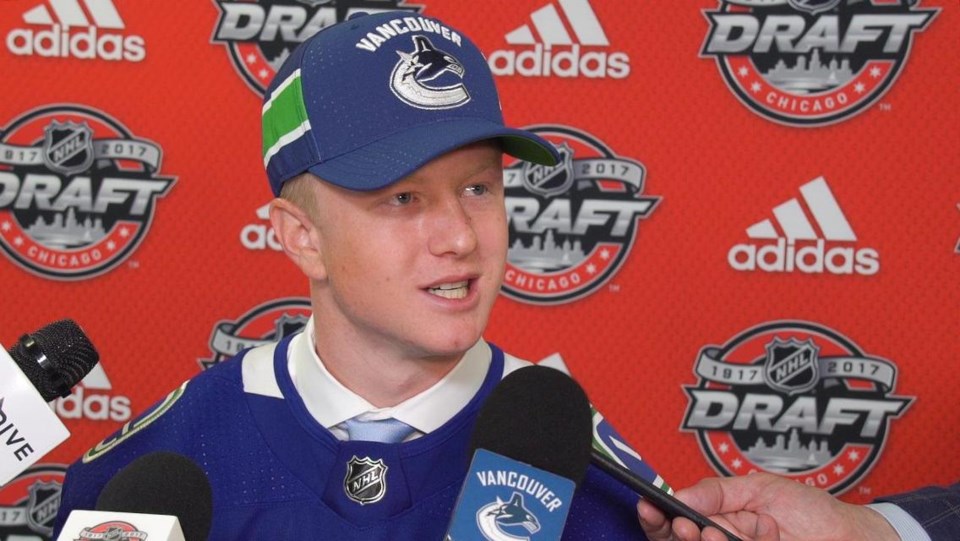 The Canucks’ hopes on defence are resting heavily on the shoulders of Quinn Hughes, their seventh overall pick from the 2018 draft, and for good reason. Hughes is a dynamo on defence, a one-man breakout machine at even-strength and potentially the puck-moving power play quarterback for which the Canucks have pined for years.

While the Canucks desperately need Hughes to be as good as prospect experts have projected, however, he’s not the only promising defenceman in the system. Picture Obi Wan saying, “That boy is our last hope,” with Yoda replying, “No, there is another.”

Jack Rathbone has flown under the radar since he was drafted in the fourth round in 2017, mainly because he chose an unusual path for a high-end prospect: he went back to high school for his post-draft season. He had an excellent reason for doing so: he wanted to spend more time with his little brother, Teddy, who has autism.

“He’s a big piece of my life, and I’m going to be honest, it would be tough to leave him for seven months out of the year at this stage,” said Rathbone prior to the draft. “He’s probably my best friend. So being able to stay home, being able to complete my four years at Dexter — they took a financial risk on me and my sister [Jayne], we wouldn’t be able to afford an education there — being able to finish my four years and getting my diploma, that means a lot to me and my family.”

His character, as much as his skill on the ice, attracted the Canucks and convinced them to select him 95th overall. Now in his freshman year at Harvard University, Rathbone is making the Canucks look very smart.

While Hughes is off to a strong start himself, with nine points in nine games, Rathbone is actually ahead of him in points per game. Rathbone has two goals and seven points in just five games, as Harvard’s schedule got started later than that of the University of Michigan.

That’s good for third in the nation in points per game among defencemen, behind top prospects Adam Fox and Cale Makar.

Here’s where the caveat comes in: Rathbone is on a pairing with Fox, a Carolina Hurricanes prospect that has a whopping 12 points. Playing alongside a top defenceman like Fox certainly hasn’t hurt and it’s pretty easy to suggest that Rathbone wouldn’t be off to such a hot start without an even hotter partner. Fox and Rathbone are currently leading Harvard in scoring, with Rathbone tied with forward Casey Dornbach for second.

The more optimistic view is that it’s great to see Rathbone already playing on Harvard’s top pairing as a freshman. That’s not always a given, even with blue-chip prospects, so it’s a good sign that the 19-year-old Rathbone has quickly earned that kind of trust from his coach.

You can see why Rathbone has his coach’s trust when you watch him play, which you can do thanks to YouTube. This 15 minute video captures most of Rathbone’s shifts from his three-point game against Princeton and showcases both the offensive and defensive sides of his game.

You can see an example of how quickly he likes to move the puck up ice on his first assist against Princeton. While he didn’t have any competition for the puck, he also didn’t waste any time waiting behind his net to survey his options, but broke the puck out immediately. That seemed to catch Princeton off-guard, allowing the back-door play at the other end of the ice.

A better example of his ability to win pucks and escape the defensive zone came in the second period.

Initially just looking to win a race to the dots for icing after a long shift, when it was waived off he instead allowed the Princeton skater, Max Veronneau, to get to the puck first, then quickly lifted his stick and skated out of danger before making a short pass to exit the defensive zone.

"My game is all transition," said Rathbone this summer. "In terms of the way the game is going with the defence being the fourth forward, that really suits my game. I’m pretty confident and I’m really focused on making an impact as a freshman."

Rathbone also prevents a lot of time spent in his own end of the rink with excellent gap control at the blue line, aided by his sublime skating.

For instance, this play on Christian O’Neill shows just how powerful and fluid a skater Rathbone can be. He’s nearly starting from a standstill at the Princeton blue line, but with a few quick crossovers going backwards, he matches O’Neill’s speed and forces a dump-in at the blue line. To finish off, he takes a good lane back to the puck to run a little legal interference on O’Neill to allow Fox to break out with the puck.

We see another great example of Rathbone preventing a zone entry came later in the first period against Verroneau, who is one of Princeton’s top players and someone the Canucks have expressed an interest in signing as a free agent. Verroneau tries to make moves, but Rathbone keeps pace with him and neatly knocks the puck away at the blue line with a quick sweep of his stick.

Rathbone isn’t afraid to play physical when the situation warrants it. Though he’s not particularly tall at 5’11”, he’s listed at a decently hefty 190 lbs. That's a big difference from the 165 lbs he was listed at before the draft, and he showed his strength on this open ice hit on Jordan Fogarty.

In the offensive zone, Rathbone adds a bomb of a slap shot to his skating and passing. He has a hard and accurate shot and seems to be able to get it through traffic with some consistency. He’s averaging 3.2 shots per game, good for 8th in the NCAA among defencemen.

One of his two goals this season came against Princeton and it was a one-timer that appeared to beat the Princeton goaltender cleanly on the blocker side.

#Canucks prospect Jack Rathbone with the point shot to score his second goal in as many games pic.twitter.com/vZEGfPnOjg

With his shot, mobility, and passing, it shouldn’t come as a surprise that Rathbone is on the Harvard power play. He’s spent time on both the second and first unit, where Fox is the go-to quarterback. Fox has five power play points in five games, so it’s understandable that he’s in that spot.

Rathbone has just the two assists on the power play and no goals so far, but he definitely has the skill set to do some damage with the man advantage.

What does this mean for the Canucks? While Rathbone doesn’t have the blue-chip pedigree of Hughes and likely doesn’t have the top-pairing upside either, he’s still an excellent prospect, better than you might expect from a fourth-round pick out of US High School Hockey. His combination of skating, skill, and hockey IQ gives him some potential to become an NHL defenceman and help the Canucks of the future become quicker in transition and more dangerous on the power play.

There’s a lot to like about Rathbone; he’s one to watch as his season progresses.