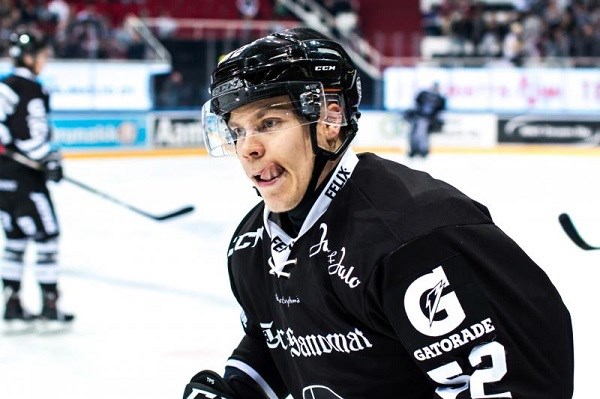 Elias Pettersson racked up awards at the end of the SHL season and Jonathan Dahlen was the undisputed Allsvenskan MVP and top forward, but there’s one more Canucks prospect up for some hardware in a European league: Petrus Palmu.

The diminutive Finnish forward is one of three finalists for the Jarmo Wasama memorial trophy, which is given out to the best rookie in the Finnish Liiga every year.

The three finalists were the top-three scorers among rookies this past season: Palmu, Jonatan Tanus, and Jesperi Ketkoniemi. As the leading rookie scorer, Palmu perhaps has a leg up on the other two finalists, but let’s compare them a little more closely and take a look at what it might mean for Palmu to win.

Only a few winners of the award in past decades have gone on to NHL success, like Olli Jokinen and Antero Niittymaki. Former Canuck Petri Skriko won the award back in 1980-81, just before he was drafted by the Canucks. Skriko was one of the team’s top players in the mid-to-late 80’s and, as has been pointed out by a PITB commenter, shares some traits with Palmu, including size, speed, shiftiness, and scoring touch.

More recently, however, winners of the Jarmo Wasama trophy have made a quick ascension into the NHL.

And then there’s Patrick Laine, who won in 2015-16, his draft year. He’s one of the NHL’s most exciting young snipers, racking up 44 goals this past season.

You might have noticed a theme there: all four of those players won the award in their draft year. There’s also Juuse Soros, one of the most promising young goaltenders in the NHL, who won the award in 2013-14, the year after he was drafted, but was still just 18 years old.

Palmu, who was drafted as an older player by the Canucks, is already 20 and will turn 21 before the start of next season. One of his fellow finalists, Tanus, is even older at 22. Kotkaniemi, on the other hand, is just 17 and is expected to be a first-round pick in the upcoming draft.

For Kotkaniemi to win the award, it would be a promising sign of future success, like it was for Granlund, Teravainen, Lehkonen, and Laine. I mean, they would have had the success anyways, as the award merely affirmed the talent already there.

Palmu could very well steal it from Kotkaniemi, however. The only category where Kotkaniemi has a clear advantage over his fellow finalists is “Most Finnish Name.” Let’s compare the three finalists:

Palmu leads the way in goals and points. He also had the best plus/minus, and led the three finalists in shots on goal by a wide margin. Those are all very good signs.

Palmu was also the leader in corsi percentage, but that requires a bit of context: he also had the highest offensive zone start percentage of the three, suggesting he was more sheltered than the others. That said, when you’re scoring goals on a regular basis, your coach will usually try to get you in the offensive zone more often.

Tanus, on the other hand, was trusted a lot more in the defensive zone, so his 49.9% corsi percentage should perhaps be viewed more highly on that basis. He also had the most ice time of the three and most assists, while finishing second in most of the other categories to Palmu.

Palmu has a strong statistical case for being the Finnish rookie of the year, but even if he doesn’t win, his sold Liiga season bodes well for his future in North America. Perhaps winning the Jarmo Wasama trophy will give him a boost in confidence as he heads into his summer training with eyes on making the Canucks out of camp next season.