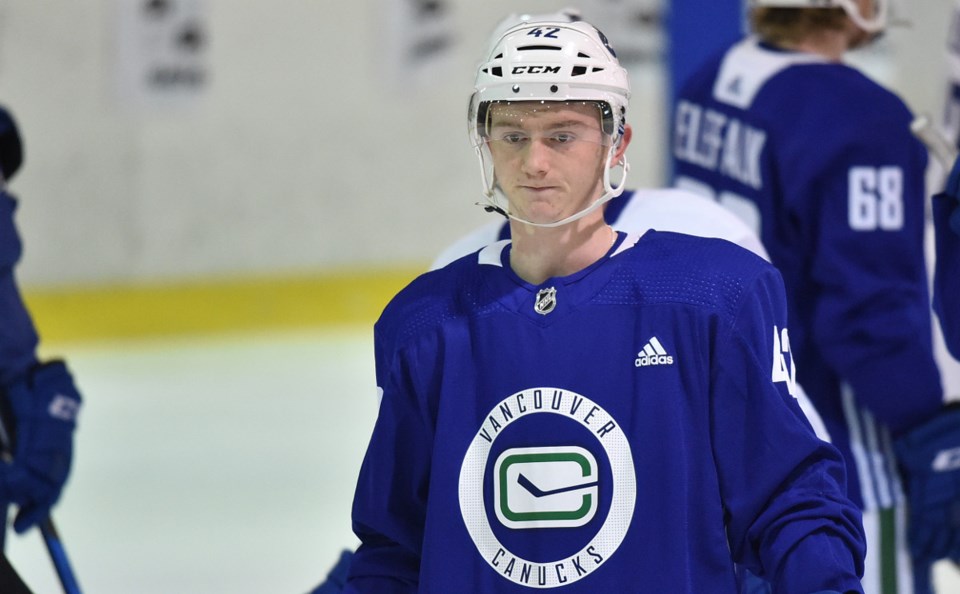 When it comes to drafting out of the USHL, Canucks fans have learned to have faith in Judd Brackett.

Brock Boeser was a steal at 23rd overall; the only player with more goals per game than Boeser from the 2015 draft is Connor McDavid. Likewise, Adam Gaudette wouldn’t make it to the fifth round, where the Canucks picked him, in a 2015 redraft.

Then there are the prospects that have yet to reach the NHL, but have potential. Will Lockwood is one of them, showing good progression from year-to-year in college hockey, with a fast-paced two-way game that could make him a bottom-six fit in the NHL in the future.

Then there’s Jack Rathbone, who played high school hockey rather than going the USHL route, but was identified by the same US scouts for the Canucks. Rathbone had a strong freshman season at Harvard and has been even better in his sophomore year.

The Canucks dipped into the USHL again in the 2019 draft, taking savvy playmaker Jack Malone in the sixth round and the late-blooming power forward Aidan McDonough in the seventh. Malone has been off to a quiet start to his season — not unusual for a freshman in the NCAA — but McDonough already has 10 points in his first 13 games.

McDonough has picked up some of those points while playing with another potential USHL steal for the Canucks: Tyler Madden.

Madden has had an unreal start to his sophomore season with Northeastern University, scoring 12 goals and 22 points in 16 games. That’s tied for first in the NCAA in goalscoring and third in points, quickly establishing himself as one of the most dangerous forwards in college hockey.

The Canucks picked Madden in the third round in 2018, which might have seemed like a reach, if not for Brackett’s reputation for finding value in the USHL. Madden had just 34 points in 50 USHL games, well behind some of his peers in his draft class, but similar to the 30 points in 50 games Gaudette put up in his draft year.

Madden followed even more closely in Gaudette’s footsteps, heading to Gaudette’s alma mater at Northeastern. There, he parlayed a strong freshman season into a spot on the USA World Junior team, where he put up 4 points in 7 games, taking home a silver medal.

With several seniors leaving Northeastern after last season, Madden has stepped up to lead the Huskies as a sophomore. His 12 goals and 22 points are 7 more than the next best skater, who has 5 goals and 15 points.

Let’s take a look at those 12 goals and a few of those points in this highlight reel.

On some of his goals, Madden is an opportunist, getting himself in a good position to take advantage of his teammates’ playmaking, and putting the puck in the net. That’s not to undersell those goals, as they require hockey IQ and finishing ability, which are both hallmarks of Madden’s game.

“He's a smart player, he's crafty,” said Ryan Johnson, the Canucks’ Director of Player Development. “Even though he's not the biggest of guys, it doesn't matter because he plays a hard game. His hockey sense is so high that he puts himself in smart areas to get the puck.”

Along with those goals, however, he’s had a few highlight reel tallies.

Take his goal against Merrimack on November 9th (1:22 in the video). Madden is a catalyst on the power play for the Huskies and he shows it, attacking down the left side, leaving a penalty killer sliding to his keister with a toe-drag before beating the goaltender with a nifty move to the backhand.

Then there’s his hat trick against Maine on November 22nd (1:45). The first goal comes on a lovely give-and-go with Grant Jozefek that Madden finishes off with a nice move to the forehand. Then he scores on another give-and-go with McDonough, before finishing off the hat trick with a ripper of a snap shot off the rush.

Madden is a superb skater, which he puts to good use creating odd-man rushes at even-strength, but also on the power play, where he opens up penalty kills with his shifty movement around the zone. His great hands and finish around the net don’t hurt either.

The one concern with Madden is his size. At 5’11”, there are no issues with his height, but he’s very slight at just 155 lbs. As much as the NHL is becoming a friendlier place for small players to make their mark, that’s lighter than even the lightest player in the NHL this season, the 5’9” Brett Seney, who has played two games for the New Jersey Devils.

Madden is well aware of the size concerns — like with Elias Pettersson, the doubting likely fuels him — and knows what he needs to work on most.

If Madden can add more size and strength to his already prodigious skill set, the Canucks could have a real steal on their hands out of the USHL, which is starting to become routine for them.