One of Jim Benning’s best free agent signing in his tenure as GM of the Canucks was an undrafted defenceman out of the NCAA: Troy Stecher.
Apr 1, 2019 6:53 PM By: Daniel Wagner 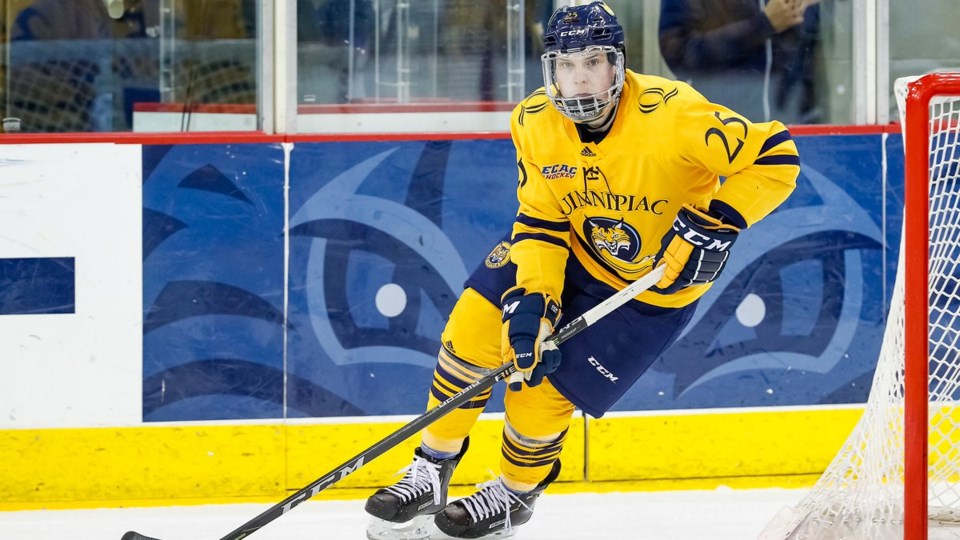 One of Jim Benning’s best free agent signing in his tenure as GM of the Canucks was an undrafted defenceman out of the NCAA: Troy Stecher. The right-handed Stecher quickly established himself in the NHL and has proven himself to be a key part of the future of the Canucks’ defence corps.

Benning is likely hoping the same will be true of his latest signing out of the NCAA: right-handed defenceman Brogan Rafferty.

The Canucks signed Rafferty to a one-year entry-level contract on Monday that will see him become a restricted free agent in the summer. It’s the same deal that Josh Teves received and for the same reason: entry-level contracts for players that turn 24 before September 15th have to be for one year according to the CBA and Rafferty will turn 24 in May.

This is the third college free agent the Canucks have signed this season, but will likely be the last, as the Canucks have reached the 50-contract limit. Barring some fancy finagling, they’re done until any current contracts expire.

Rafferty is a player the Canucks have been eyeing for some time. They reportedly had interest in Rafferty over a year ago, which makes a lot of sense: the Canucks have a serious need on the right side of their defence.

Rafferty is an intriguing prospect because he’s the definition of a late bloomer. As a child, he had adolescent scoliosis and amblyopia. The curvature of his spine was corrected over time, but he’s still legally blind in his right eye, even if he can see well enough with contacts.

“I can still see shapes and stuff when I cover one eye, I just can’t read,” said Rafferty to the New Haven Register a few years ago. “It’s something I was born with so I never knew what it was like to have really good vision. I don’t know if it’s helped my game; if it’s made me think more on the ice instead of taking more for granted.”

At 16, Rafferty was just 5’8”, but has shot up to 6’2” since. In addition, he didn’t start playing defence until his senior year of high school. He switched from forward on the advice of his father, Brian, who told him, “The game has changed, Brogan, they need puck-carrying defencemen now. With what you have and your gifts, I think you should try defence. He was willing to try and grasped it quickly.”

Rafferty’s gifts include excellent skating, soft hands, a strong shot from the point, good hockey sense, and above average vision and passing. His offensive instincts are on display in this highlight from January, when he danced past a Holy Cross defender at the blue line for the zone entry, then set up Desi Burgart in the slot with a blind backhand pass.

He has a forward’s hands and finish on this breakaway goal, which was the first of his NCAA career.

GIF: Brogan Rafferty with his first goal of his career...and he does it with some style. Bobcats lead 4-2. pic.twitter.com/BHWYISaPUA

He can also get a decent shot off from the point and was a staple on the Quinnipiac power play. 16 of his 24 points this season came via the power play, as did three of his four goals.

At 23, Rafferty should be reaching his prime, so will hopefully be able to establish himself quickly in the AHL with the Utica Comets and potentially be a call-up option as early as next season. Ideally, he’d follow in the footsteps of Stecher, who, at 21, had somewhat similar production as Rafferty in his own 21-year-old season. Rafferty, however, hasn’t progressed as much in points since then, but could still have some upside as a puck-moving defenceman.

At the very least, Rafferty presents another possibility of finding some help on the right side. Along with Stecher, Chris Tanev, Alex Biega and (potentially) Luke Schenn in the NHL, the Canucks will have Jett Woo, Jalen Chatfield, Mitch Elliot, and now Rafferty as depth.

Is that enough? Probably not. The Canucks badly need another NHL-caliber, right-side defenceman, preferably one that can play on the first or second pairing. If they can find that, whether it’s in free agency, on the trade market, or at the draft, that will significantly improve their depth.