Every NHL team gets seven draft picks every year. Over a four-year span, the base number of draft picks doled out to every NHL team is 28. That’s where every team starts.
Feb 26, 2018 5:04 PM By: Daniel Wagner 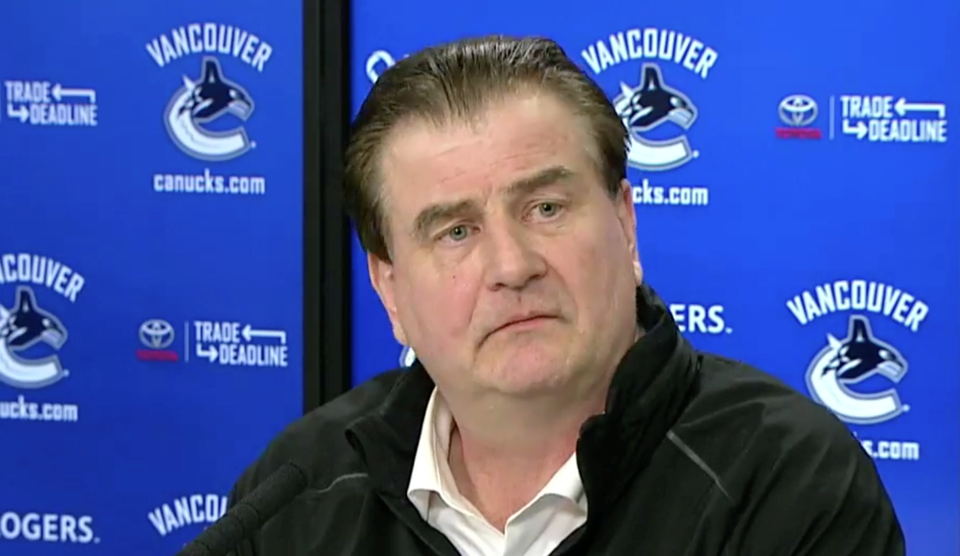 Over the last four years, the Canucks have selected 28 players in the NHL entry draft. No more, no less.

That means, for every draft pick the Canucks have brought in with a trade, another draft pick has gone out. For a team that has bottomed out in the NHL standings, it’s almost inconceivable that they haven’t picked more players in the draft.

Heading into the 2018 draft, the Canucks don’t even have their allotted seven draft picks. They sent a fourth-round pick to the Pittsburgh Penguins as part of the Derrick Pouliot trade.

On Monday, at the trade deadline, the Canucks had an opportunity to rectify this situation by acquiring additional draft picks, but were either unwilling or unable to do so. Instead, Canucks GM Jim Benning made two trades for reclamation projects.

Benning and team president Trevor Linden preach slow and steady, and building through the draft, but continue to try to turn the Canucks around “in a hurry,” like they did when they first started. Why else would Benning trade for a 22-year-old and a 23-year-old ready to contribute now, even if that contribution is as a third or fourth-line forward?

The Canucks sent Philip Holm to the Vegas Golden Knights for Brendan Leipsic early in the morning, then squeezed in a Thomas Vanek trade before the noon deadline, sending him to the Columbus Blue Jackets for Tyler Motte and the recently-waived Jussi Jokinen.

Both trades fit a pattern started as soon as Benning was hired. One of the earliest trades Benning made was sending a recently-acquired second-round pick to the Los Angeles Kings for Linden Vey.

At the time, Vey was a 23-year-old AHL star, who had trouble breaking into a deep Kings lineup. He had 48 points in 43 AHL games the previous season. He was a favourite of head coach Willie Desjardins, who had previously coached him in junior with the Medicine Hat Tigers. In his best junior season, he had 49 goals and 120 points.

Brendan Leipsic is a 23-year-old AHL star, who has had trouble replicating that success with the Vegas Golden Knights. He had 51 points in 49 AHL games last season. He previously played for head coach Travis Green in junior with the Portland Winterhawks. In his best junior season, he had 46 goals and 116 points.

Four years after he was acquired by the Canucks, Linden Vey is in the KHL, though he did win a bronze medal with Team Canada at the NHL-free Olympics. Where will Leipsic be in four years?

That’s not to say that Vey and Leipsic are the same player — Leipsic is more of a gritty pest — but that we’ve seen this move before. At the very least, Benning is no longer trading draft picks and prospects to acquire this type of player, but it’s hard to avoid the feeling that the Canucks are just spinning their wheels and going nowhere.

For the most part, these reclamation projects have already shown the limits of their potential. In general, hockey players plateau from around 22 to 25, https://hockey-graphs.com/2017/03/23/a-new-look-at-aging-curves-for-nhl-skaters-part-1/ so when you acquire a player within that window, their potential for growth is limited. They’ll likely get better, but even by 22, you start to have a good idea of who they are.

It started with Linden Vey, but continued with trades for Andrey Pedan, Adam Clendening, Sven Baertschi, Emerson Etem, Markus Granlund, and Derrick Pouliot. You could also arguably include Philip Larsen, who cost the Canucks a fifth-round pick to acquire.

Benning adds these players in their twenties with the belief that they will supplement the players they have drafted and they have had a couple wins. They hit on Baertschi, who appears to be a legitimate top-six winger, but the other two wins, Markus Granlund and Derrick Pouliot, appear to have a ceiling on the third line or third pairing.

Leipsic and Motte technically didn’t cost the Canucks any draft picks, but in a way they did. While the rest of the teams active on deadline day moved rental players and depth skaters for draft picks, Benning acquired reclamation projects instead.

Leipsic has two goals and 13 points in 44 games this season with the Golden Knights, albeit with a dreadful shooting percentage that ought to regress. He is likely a third-line forward if all goes well for him in Vancouver. Motte is similar, except without the shooting percentage excuse, with five points in 31 NHL games and less of an AHL track record. Again, if all goes well, he’s a third-line forward.

“We pretty much talked to every team in the league,” said Benning after the deadline. “We would have preferred getting picks back. That wasn’t available to us. What we did, we think we did the next best thing, getting a good, young player that our scouts like.”

18 draft picks were traded in the week leading up to the deadline. Another 17 draft picks changed hands on deadline day.

Somehow, the Canucks walked out of the trade deadline without a single pick.

Those extra picks matter. A second or third-round pick doesn’t just represent a certain percentage chance of getting a player who appears in 100 NHL games, but a chance at a top-six forward, top-four defenceman, or starting goaltender. The more picks you have, the more risks you can take on players with high ceilings.

Back in 2015, the Canucks had an extra fifth round pick from when Mike Gillis traded Raphael Diaz to the New York Rangers. After taking defenceman Carl Neill with their first pick in the fifth round, they took a chance on Adam Gaudette, a centre out of the USHL who had mediocre numbers but kept catching the eye of their scouting staff. Without that extra fifth-round pick, one of the key components of the Canucks’ prospect pool is on another team.

The Canucks had an extra second-round pick in the 2017 draft, not because they traded for it, but as compensation for the Columbus Blue Jackets hiring the fired John Tortorella. The extra pick allowed them to take Jonah Gadjovich in addition to Kole Lind earlier in the round.

Later in the 2017 draft, the Canucks traded down to acquire a sixth-round pick. With it, they were able to take a chance on over-aged and under-sized Petrus Palmu, who currently leads all rookies in scoring in the Finnish Liiga. There’s no guarantee he makes it, but that additional pick allowed the Canucks to gamble that he will.

When asked about adding draft picks, the best Trevor Linden has been able to offer is that they traded Eddie Lack for a third-round pick and Kevin Bieksa for a second-round pick. Those trades were made three years ago and they still resulted in the Canucks making the bare minimum of selections in the draft over the last four years.

If Jim Benning’s strength is in amateur scouting and drafting, why has he hamstrung himself at the draft? Why not give himself more chances to find an impact NHL player instead of constantly filling up the lineup with reclamation projects?

Benning’s claim is that picks just weren’t available, but what does that say about him and the team he has put together?

The stated goal of this managerial regime is to be competitive every season, but the players they bring in don't make them competitive enough to make the playoffs and then aren't attractive enough to other teams to get anything in a trade. Something has to change.