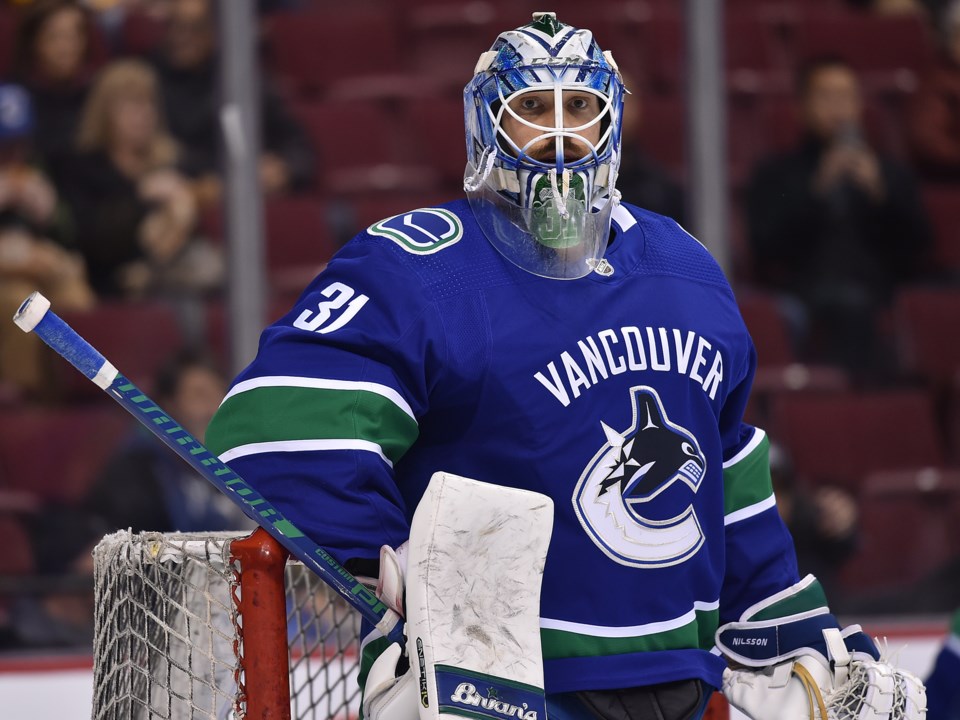 The Canucks are in Ottawa to face the Senators on Wednesday, but one player won’t be leaving with them as they continue their road trip. Anders Nilsson will be staying in Ottawa, as he’s the newest member of the Senators.

On Wednesday morning, the Canucks traded Nilsson along with winger Darren Archibald to the Senators for goaltender Mike McKenna, winger Tom Pyatt, and a sixth round pick in 2019.

This could lead to the odd situation of Nilsson immediately dressing for the Senators against his former team. While rookie goaltender Marcus Hogberg is expected to get the start for the Senators, there’s a possibility that Nilsson could get the start instead or get called upon if the Canucks chase Hogberg with an offensive outburst early in the game.

It’s entirely possible that neither McKenna nor Pyatt will ever play for the Canucks: Pyatt was waived by the Senators yesterday and went unclaimed, so can be sent to Utica immediately, while McKenna isn’t an NHL-caliber goaltender. Both of their contracts expire at the end of this season.

The benefit of this trade for the Canucks, then, is not in the players acquired but in the space made for a player already in the system: Thatcher Demko.

There have been calls for the Canucks to give Demko a longer look in the NHL since last season. Demko’s path to playing for the Canucks this season was complicated by the concussion he suffered in the preseason and the presence of Nilsson and Jacob Markstrom ahead of him on the depth chart.

Now that Demko has recovered from his concussion and is back up to speed — he played in 11 of the Comets’ 13 games in December — the only impediment to him playing in the NHL was Nilsson.

The Canucks could have tried waiving Nilsson to send him down to the AHL, but they still would have had to pay his $2.5 million contract, with $1.475 million staying on the Canucks cap as there is a maximum of $1.025 million that can be buried in the AHL. Instead, they took advantage of a Senators team desperate for NHL goaltending to offload Nilsson’s contract and pick up an asset in return.

The Senators’ number one netminder, Craig Anderson, hasn’t played since he suffered a concussion on December 21st in a collision with New Jersey Devils forward Miles Wood. At this point, it’s unclear how long he’ll be out of the lineup.

Mike Condon was expected to push Anderson for playing time this season, but he struggled in two early starts for the Senators and was sent down. He’s played just one game in the AHL this season before suffering a hip injury, with an unknown timetable for his return.

With Anderson and Condon out, the Senators have had to turn to McKenna and Hogberg, neither of whom have been up to the task. McKenna has an .897 save percentage in ten appearances for the Senators this season, while Hogberg’s save percentage is even worse at .883, albeit in just two games.

That gives the Senators good reason to take a gamble on a goaltender like Nilsson, who hasn’t been good for the Canucks this season — his .895 save percentage is worse than McKenna’s — but has had flashes of brilliance at times in his career and has a better overall track record than McKenna.

Nilsson also represents a short-term fix for the Senators: his $2.5 million contract is up after this season and he can easily be moved to a backup role this season when Anderson returns.

With Nilsson gone, Demko will now be called up to be the backup behind Markstrom.

“One of the things that we wanted to do was make room for Thatcher and get him going,” confirmed Canucks GM Jim Benning in a conference call with the media. "It's time to bring him up and see where he's at facing NHL competition."

This seems like the right time: Demko is already 23 and has played just one NHL game. He’s been good enough in the AHL that he deserves a bigger NHL opportunity. Trading Nilsson gives him that chance.

Along with the opportunity for Demko, the main return in the trade is the sixth round pick in 2019. That represents a small cost for the Senators to make a minor upgrade in net; for the Canucks, it’s one more pick they get to make in front of a hometown crowd with the 2019 draft being hosted in Vancouver.

The Canucks now have nine picks in the 2019 draft. That includes their original seven picks, along with a sixth round pick they acquired from the Washington Capitals when they traded down in the sixth round at the 2018 draft. Ideally, the Canucks would look to acquire more picks further up the draft, but more spins of the roulette wheel in the later rounds increases their chances of finding an NHL player.

Along with Nilsson, the Canucks sent Darren Archibald to the Senators. Archibald will be missed in Utica, as he’s a fan-favourite for both his physicality and his scoring, and he was a decent fourth-line forward for the Canucks when he was called up. There wasn’t much future for him in Vancouver, however, as the Canucks clearly aren’t convinced that he’s a full-time NHLer.

While trading Archibald could have freed up room for a Canucks prospect to get more playing time, the Canucks also acquired Tom Pyatt, who will fill a spot on the wing in Utica. Pyatt, the younger brother of former Canuck Taylor Pyatt, hasn’t played in the AHL since the 2009-10 season, when he had 35 points in 41 games.

Since then, Pyatt has been a consistent bottom-six forward in the NHL, apart from a stint in the Swiss league from 2014 to 2016. With just two assists in 37 games for the Senators this season, it’s understandable why he was waived, but he should be just fine in the AHL.

With Richard Bachman injured in Utica — he left a game on December 21st with an injured achilles, ending his season — McKenna should give the Comets a reliable starter when Demko gets called up. Their other goaltending option is Ivan Kulbakov, who has struggled with an .880 save percentage.