Keep cats safe by keeping them indoors, author says. That keeps keeps birds safe, too
Aug 22, 2018 9:59 AM By: Martha Perkins 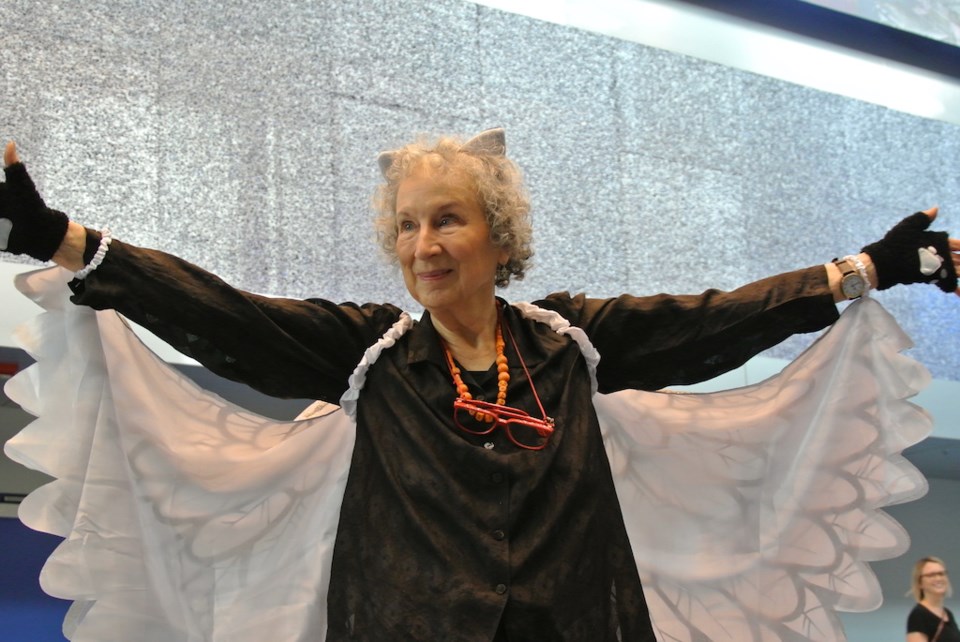 Margaret Atwood learned a lot about squirrel anatomy from her cat. It loved to kill squirrels and eat them, leaving only the gizzards as a memento.

Another cat preferred rabbits. It would hunt them at night, bringing the dead ones into her bedroom through an open window.

Today, Atwood wants to save birds from similar fates.

As the author of the Angel Catbird graphic novels, the Nobel Prize for Literature nominee is willing to don cat ears and wings to illustrate her point: don’t let your cat roam free.

“Cats are primed to hunt; they like doing it. It’s fun for them,” she said at an August 21 media event during the 27th International Ornithological Congress being held this week at the Vancouver Convention Centre.

Why do cats hunt? “It’s sort of ‘Why does the sun shine?’

“It’s not their fault. It’s natural that cats like to stalk things and jump on them but there’s no reason they can’t do that indoors…. They can have just as much fun chasing a wind-up toy mouse.”

Cat predation is one of four leading causes of death for birds. The others are habitat loss, toxicity and flying into windows.

A cat lover herself, Atwood says knows she won’t reach many people if she simply uses statistics to make her case. That’s why she turned, instinctually, to story telling to make her point. And, as the daughter of a biologist who spent a lot of her childhood exploring the outdoors, she also knows how important it is to reach out to children.

“What better way to influence your family’s behaviour than through nine- to 12-year-olds,” says the Booker Prize-winning author of The Handmaid’s Tale, adding “You can teach much better through stories than numbers. It’s a very old human technology.”

The three Angel Catbird books are about to be released in a hardcover version: The Complete Angel Catbird. Illustrated by Vancouver artist Johnnie Christmas, the graphic novels follow the Angel Catbird superhero as he “gets caught in the middle of a war between animal/human hybrids.”

Atwood said if she’d written the book in the 1950s, the superhero would have got his powers after falling into a vat of chemicals. In the 1960s, he would have been bitten by a radioactive spider. In the 2010s, he’s a geeky scientist who gets genetically spliced with a cat and bird.

“He loves cats and birds both. He has commitment issues,” Atwood said.

Loving cats and birds doesn’t need to be mutually exclusive, one pitted against the other. Atwood doesn’t want people to have to take sides. Instead, she wants cat lovers to see keeping their cats indoors — or with access to “catios” — is a way of showing that love with the added benefit of keeping birds safe.

“Your cat should be treated as well as a dog,” she said, noting that if a dog gets lost, it has a 60 per cent chance of coming home alive. If a cat gets lost, it’s 30 per cent.

“It’s not true that cats are smart about cars,” she said, noting that many get killed on roads. Cat mortality is also high because of run-ins with raccoons, coyotes and cougars.

A long-time bird enthusiast, Atwood is co-author of the children’s book For the Birds and the printed essay Birds. Her long-time partner, Graeme Gibson, wrote The Bedside Book of Birds: An Avian Miscellany and together they support many bird projects.

She attended the ornithological congress with Sarah Cooper, the project manager of Keep Cats Safe and Save Birds Lives. It’s a national coalition of groups led by Nature Canada and including Bird Studies Canada, Earth Rangers and the Canadian Federation of Humane Societies.

More than 1,600 scientists and conservation experts from 72 countries are attending the ornithological congress, held once every four years. This is the first time that it’s been complemented by such a large public initiative as the inaugural Vancouver International Bird Festival.