Ken MacLeod wrote the definitive guide to the city’s south slope, an exercise that took him 12 years
Jan 14, 2019 4:18 PM By: John Kurucz 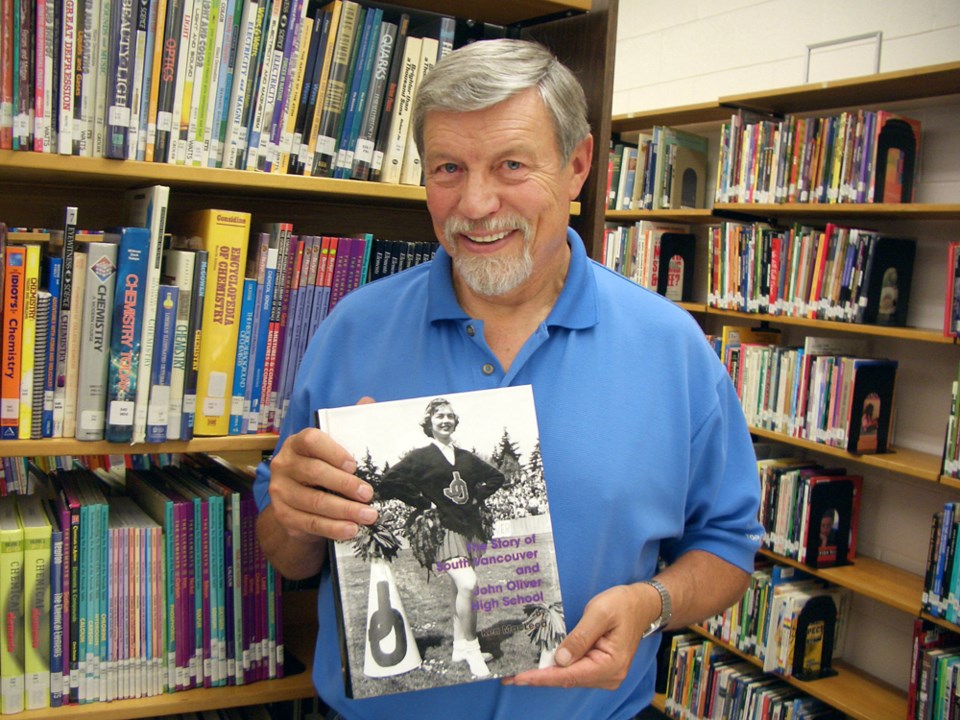 If there was ever an unanswered question about South Vancouver, Ken MacLeod was the man for the jobRob Howatson

Ken MacLeod was always a stickler for details.

When MacLeod wasn’t pouring over the minutiae of his old stomping grounds, he found time to lead 30 guided tours throughout Europe for Armed Forces members. He also coached more than 60 teams during his time as a high school teacher and painstakingly researched his family tree back 600 years.

A renaissance man and the leading voice on all things South Vancouver history, MacLeod died Dec. 27, 2018 after battling lung cancer. He was 74.

MacLeod was laid to rest last weekend on Vancouver Island.

Separated in age by roughly two decades, Howatson came to know MacLeod around John Oliver centennial celebrations in 2012. Howatson is a fellow John Oliver grad and helped with the exhaustive proofreading process required to pour over 800-plus pages of history.

“He had incredible stamina and he needed that because it took him 12 years to write the book — he really went down the rabbit hole,” Howatson said. “He’d find one thread and it lead to another thread, with each of those threads being a different story or a different person to interview. I’m told he had a whole room in his house full of interview tapes and research materials.”

Despite MacLeod’s reverence for his home turf, he left Vancouver relatively early in life. A John Oliver grad in 1962, he pursued a teaching degree at UBC before moving to Salmon Arm by his mid-20s. Long-form, historical narratives quickly became MacLeod’s wheelhouse in the early ’70s and his first project was to trace his family roots back to 14th century Scotland.

Armed Forces history then became MacLeod’s bailiwick, leading to his involvement as military advisor for the 2000 offering, Encyclopedia of British Columbia. MacLeod went on to head up 29 tours overseas for veterans, revisiting Canadian battlefields, cemeteries and commemorative sites. For those efforts, MacLeod received the Veterans Affairs Canada Commendation, was awarded the Queen's Diamond Jubilee Medal and made an honourary lifetime member of the Seaforth Highlanders of Canada and the South Saskatchewan Regiment.

“He loved to share his knowledge,” MacLeod’s sister Edie Kernighan told the Courier. “He worked on things off and on, but he always had a bunch of irons in the fire.”

MacLeod’s principal iron in the fire was always his old alma mater. He helped establish the John Oliver Historical Society in 1999, with the initial goal being a modest book that would take little time to write.

The furthest thing from quick and easy would emerge, as MacLeod travelled down several rabbit holes across B.C. that all somehow led back to John Oliver through upwards of 500 interviews.

MacLeod’s research uncovered the story of sprinter Barbara Howard, who became Canada’s first black female athlete to compete internationally in 1938. MacLeod hobnobbed with billionaire Jimmy Pattison (John Oliver class of 1947) and managed to track down other alumni from long before his time at the school. He gave readers a glimpse into life in South Vancouver before the Second World War, when the area was primarily used for farming and residents were referred to as “stump jumpers.”

He made a point of keeping all ages of alumni up to date through an e-newsletter and organized yearly class reunions.

“He loved high school and I think it gave him a focus and a purpose,” Kernighan said. “He could join all kinds of things and he made so many friends. He absolutely thought high school was wonderful, like it was the be all, end all. He was really attached to the school.”

MacLeod’s works are in the process of being digitized and his legacy going forward at John Oliver will be two-fold: through the establishment of a scholarship in his name, or through ongoing efforts to create a standalone space for the all his memorabilia at the school.

Those interested in donating towards those efforts can do so through the school’s PAC, via: John Oliver PAC, 530 East 41st Ave., Vancouver, B.C., V5W 1P3.