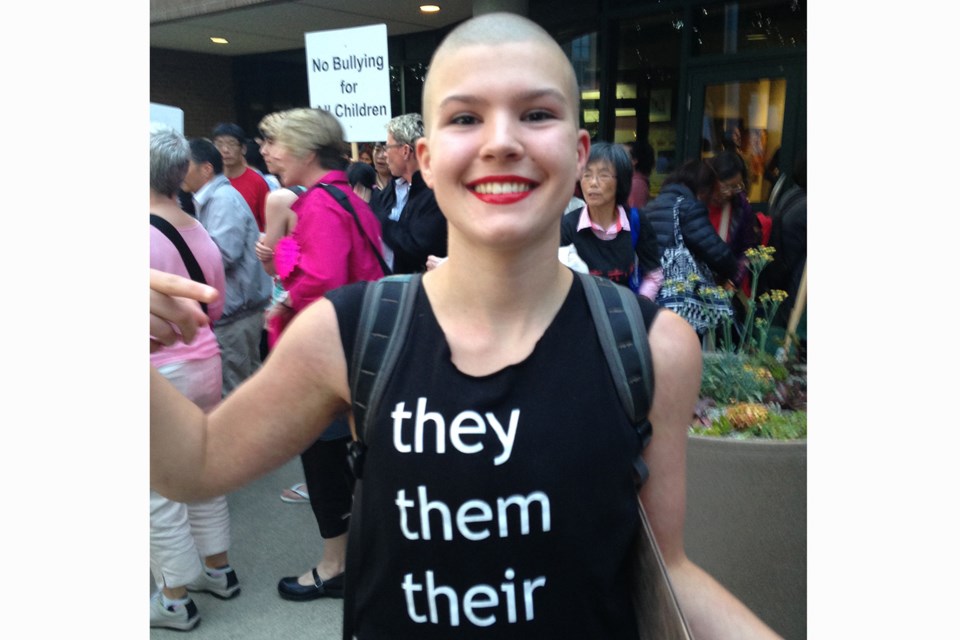 Grade 11 Kitsilano secondary transgender student Vi Levitt had stopped attending school in March. But after attending the vote Monday night, Levitt intended to enrol again in September with the hope the policy would help teachers make the school more comfortable.

He called comments made by trustees Ken Denike and Sophia Woo last Friday that realtors were worried what would happen if the policy passed “irresponsible and unconscionable.”

The NPA party subsequently expelled the pair from its caucus.

“I am especially pleased that this amendment includes gay aboriginal people,” added Clement, the first aboriginal person elected to the VSB.

“I proudly urge my colleagues to support this recommendation,” he said, receiving hoots of support from people with rainbow flags in the front of the boardroom and boos from people in the back who carried placards that read “Due process is needed from VSB.”

He added the VSB had provided information about the revision to help everyone understand it.

“Liar!” shouted someone from the back of the room.

The policy’s regulations state: “Students’ rights to discuss and express their gender identity and/or gender expression openly and to decide when, with whom, and how much private information to share will be respected.”

VSB associate superintendent Maureen Ciarniello previously told the Courier the degree of privacy being afforded students under the policy is no different from the confidentiality that counsellors have long provided students. She said most parents are aware of their children’s sexual orientation or gender identity before their school communities are.

Wong was proud to have approved the initial policy in 2004. He pointed out former COPE trustee Jane Bouey, who worked to get the 2004 version in place. She received a chorus of loud boos from the back of the room.

Denike and Woo argued at least one more consultation meeting was needed.

Denike said the policy hadn’t been translated into Chinese. He said a group called Vancouver School Board Watch had collected more than 6,000 signatures on a petition calling for “proper unbiased consultations” on the policy.

“Mr. Denike’s [views] are not supported by me or the NPA caucus,” said NPA trustee Fraser Ballantyne.

Parents have worried that, for example, a boy, as assigned at birth, could suddenly start using girls’ bathrooms and change rooms.

The regulations, which were approved by all nine trustees except Denike and Woo, say bathroom and change room use will be assessed on a case-by-case basis.

Ciarniello said a switch wouldn’t happen over night and most of what parents were concerned about equalled bad behaviour, not a student simply using a private stall.