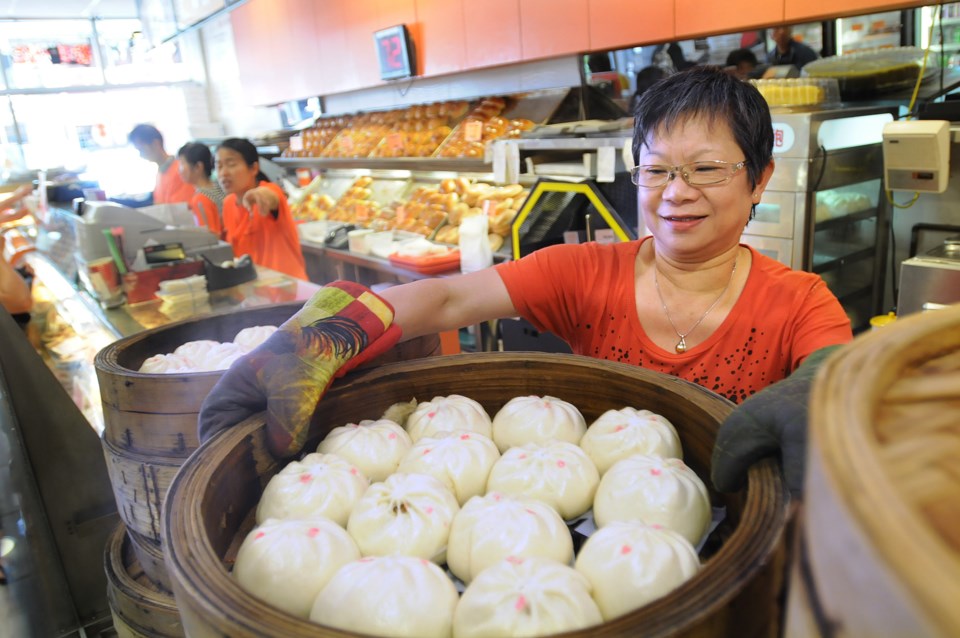 Susan Ng has operated New Town Bakery with her husband in Chinatown for 35 years. “In this day and age, we can’t keep thinking about before,” she says about the changes to the community. “[We] need to accept and just cope.” Photo Dan Toulgoet

Vincent Chin could still recall the time when he could enjoy braised pork hock, a typical Chinese dish, at Hon’s Wun-Tun House in Chinatown late at night.

Despite its liveliness during his first visit, long-time Vancouver resident Chin was surprised by the area’s notable changes in its late-night scene at his next visit a few years later.

Now, Chinese food outlets in Chinatown compete for the community’s changing demographic along with new Western restaurants and trendy cafes emerging in the area — food is another cultural element affected by the recent gentrification of one of Vancouver’s most historic communities.

Chinatown resident Wilson Liang has noticed that some businesses which serve local residents are closing down, despite the growth of the neighbouring residential areas in recent years.

“There are new condos in the block, but there was no increase of foot traffic in Chinatown,” said Liang.

The population brought in by the new market-price housing do not necessarily frequent Chinatown businesses, he said.

“The new demographic still contribute to [the population of] Chinatown,” he said. “[The new residents] and chain restaurants attract a similar demographic and they survived, pushing out independent stores that cater to the lower-income residents.”

As if to drive the point home, the neighbourhood’s first Starbucks opened shop on Keefer Street at Main, a few stores down from Hon’s, earlier this spring.

But despite its presence, some traditional Chinatown food businesses seem philosophically optimistic about their future.

Located one street north of Keefer on Pender Street is the bustling Chinese pastry provider New Town Bakery, which has been operated by co-owners Susan Ng and her husband for the last 35 years.

Her clientele has included more non-Chinese as the number of Chinese residents and businesses around New Town decreased over the last decade.

“I hope for the best,” said Ng. “In this day and age, we can’t keep thinking about before, need to accept and just cope.”

By the end of the year, Ng hopes to establish a new branch at the Joyce-Collingwood SkyTrain station. The new outlet would be independently run by her son.

It’s the bakery’s third expansion store. It established a Richmond location in 1994 and another in Surrey in 1997, due to requests from old-time customers who had started to move out of Chinatown in the 1990s, she said.

“Once upon a time, Chinatown had expensive rent,” Ng said. “It’s hard for people to stay.”

Ng bought the bakery’s current address on 148 East Pender St. four years ago when the property was a Chinese seafood restaurant that needed upgrades.

“I saw the opportunity, for the long run, instead of leasing from others,” she said. “Developers come regularly, but we already put in a lot of money.”

A block northwest of New Town, the building of the Kong Chow Benevolent Association of Canada may soon be the home of a new Chinese sandwich cafe.

Retired builder Bob Leung, a member of the association, is looking to get city approval for a building permit that would allow restaurant operations on the property.

With the building’s location in the Downtown Eastside, Leung said it has been difficult to secure tenancy because of nearby drug addicts.

In order for the new restaurant to begin operations as soon as possible, he’s discussing with the owner to open a sandwich cafe — applying for a permit that allows a small food preparation area would be quicker than for one that allows a full commercial kitchen.

At Crackle Crème two blocks south from New Town on Union Street, one of the area’s newest culinary players has a mixed clientele ranging from tourists to visitors from Langley.

“I thought Chinatown would be good because there’s quite a few Caucasian-owned restaurants, just because my visitors are more Western-theme,” said Wong. “That’s why I chose to stay close to downtown but not in downtown.”