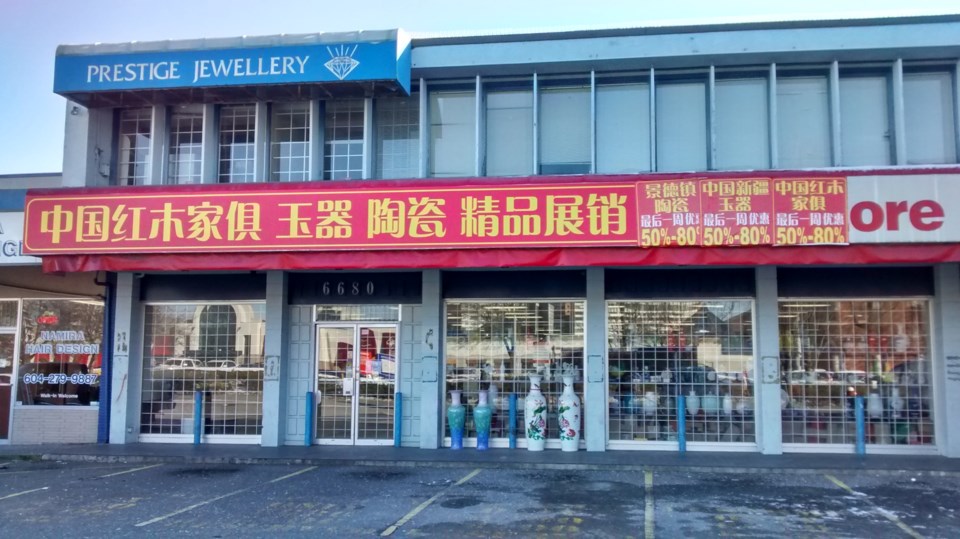 This pottery and home accessory business erected Chinese-only signs across from Richmond City Hall, despite apparent (non-enforceable) policies that encourage English on 50 per cent of signage.

The Chinese-only signage of a new business, in the sightlines of Richmond City Hall, is renewing doubt on the effectiveness of the municipality’s English sign policy and “de-cluttering” bylaw.

“The signage issue is never ending,” said community activist Kerry Starchuk, who has long contended the decades-long controversy is worsening without an enforceable bylaw directing businesses to include an official language.

“The city knows exactly what's necessary to address the issue once and for all. The signage issue will continue to be an ongoing issue until B.C. has a language law. The clutter bylaw - It's make believe,” she said.

But Coun. Ken Johnston said there has been 100 per cent compliance of a policy to have businesses include English on new signs. He questions if this business, appearing to sell pottery, went through the legal sign permit channels.

The News has asked city hall to confirm whether the sign, at No. 3 and Cook roads, has a permit.

At any rate, said Johnston, this “one off,” while “annoying,” is just that — a rare exception, since the city created its (non-enforceable) policy.

In June, city council came close to mandating 50 per cent English on all regulated business signs in Richmond, via an enforceable bylaw, when Couns. Carol Day, Harold Steves, Alexa Loo garnered support from Johnston and Coun. Bill McNulty — only to have the latter two change their minds.

“The legal challenge of a bylaw is critical,” said Au.

That legal challenge includes the possibility of the city being challenged under the Charter of Rights. But according to legal advice, such a bylaw requiring English on signs could be justified if non-English signage is detrimental to the community.

Opposed to that view is Johnston.

“I think we have harmony in the community at this point in time, that’s what I believe,” said Johnston.

The city also created a “clutter bylaw,” whereby window signs and sidewalk sandwich boards are limited to varying degrees. The move was seen as a measure to control large signs, often in foreign languages, from overtaking city streetscapes.

The Richmond Chamber of Commerce opposed any language requirements in a proposed sign bylaw but was silent on the clutter bylaw.

The clutter bylaw is in effect across the city but appears to work on a complaint basis. For instance, Steveston Village has numerous shops with sidewalk signage.

Adding to the complexities of the language debate in Richmond is a new City of Richmond requirement to have English on its own bus shelters. The city contends it may regulate its own property but not private businesses, without the threat of a legal challenge.

Meanwhile, controversial bus ads in Chinese have added to the debate.