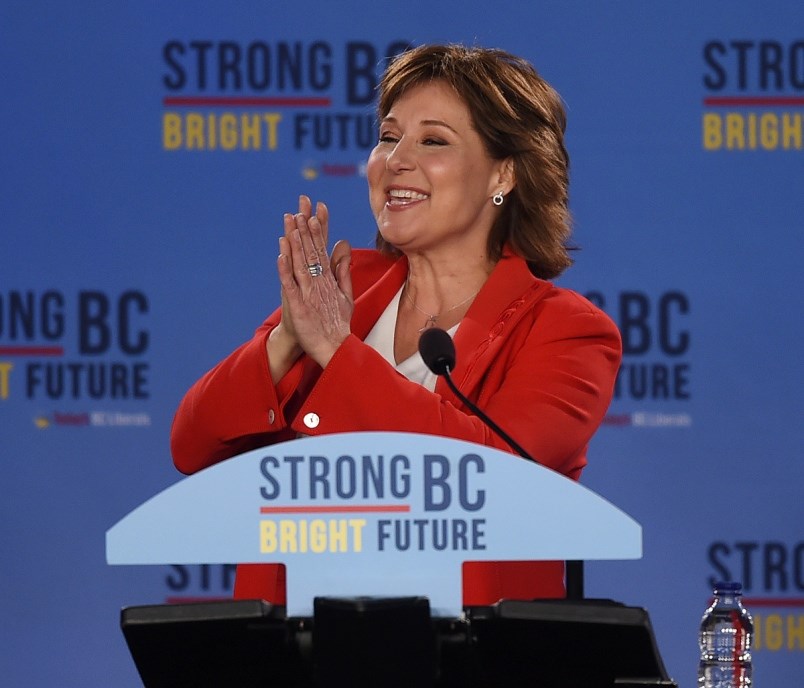 Christy Clark is resigning as leader of the B.C. Liberal Party. The announcement comes more than two months after the May 9 election and 10 days after the NDP's John Horgan was sworn in as premier.

"Serving as Premier and serving the people of British Columbia for the past six and a half years has been an incredible honour and privilege," Clark said in a statement.

"I am so proud of everything our B.C. Liberal team has accomplished. From working to make British Columbia Canada's leading economy and creating more than 200,000 new jobs, to helping thousands of single parents go from welfare to work through the Single Parent Employment Initiative, to British Columbia's gift to the World, the protection of the Great Bear Rainforest. I am certain that British Columbia’s best days lie ahead. Because British Columbians can, through hard work, determination, and perseverance, achieve anything they set their minds to.”

Clark's government fell in a confidence vote June 29 after the NDP and Green Party reached a power-sharing agreement.

“I want to thank Christy Clark for her years of service to British Columbians, both as an MLA and as Leader of the B.C. Liberals. She has been a fierce advocate for British Columbia, here at home and around the world," he said. "A highlight of my time in the Legislature was working directly with Christy Clark to implement sexualized violence policy legislation for B.C.’s post-secondary institutions.

"Her leadership and willingness to work across party lines on this vital issue has made universities and colleges across this province safer for our students — and for this I am grateful. This experience illustrated what we can achieve when members of this house work together. I wish Christy Clark well in her future pursuits and look forward to developing a productive relationship with the next Leader of the B.C. Liberal Party.”

"We take up the call of public service because we want to make this province a better place. While we represented two different political parties, Ms. Clark and I are united in the belief that, working together, we can build a better future for British Columbia and the people who call this place home," he said in a press release.

"As an MLA and as Premier, Ms. Clark fought passionately for what she believed in. I know she will take that passion and energy to her next opportunity. I wish her all the best in her future endeavours."

Kathryn Harrison, a professor of political science at UBC, said the suddenness of today’s announcement is a bit of a surprise but the resignation itself is not.

“What is surprising is that she didn’t step down sooner. She’s a fighter — she chose to try to hold on to government with the throne speech last month but once that ploy failed, having been the leader that lost the government for the Liberal Party, the writing did really seem to be on the wall that Christy Clark would have to resign."

Clark is also resigning as MLA for Kelowna West.

Harrison, commenting before this fact was confirmed, said this kind of move is unusual. She pointed out that, as a candidate, Clark just two months ago asked voters in Kelowna for a mandate to represent them for the next term of up to five years.

“So she was just elected and she just sought voters support. It’s one thing to step down as leader of the party, but continue to fulfill one’s mandate to represent one’s riding, and it’s another thing to, having just been elected, resign the seat. Jim Prentice did that in Alberta, so there is a precedent but I think it’s unusual.”

Harrison said there was a possibility that Clark would try to maintain the Liberal leadership in case the NDP-Green government fails, especially since she tried to hold on to government after the election — even after the NDP and Greens had reached an agreement.

The throne speech, delivered by B.C. Lt.-Gov. Judith Guichon on behalf of the Clark government on June 22, featured major policy shifts from what the party campaigned on during the election.

Promises included a province-wide “poverty reduction strategy,” a royal commission on education, eliminating tolls from the Port Mann Bridge, a referendum on electoral reform, increasing RCMP drug officers by 30 per cent and building a new centre for mental health and addictions in Surrey.

“She went to quite considerable lengths with that throne speech so it wouldn’t have surprised me if she tried to hold on for longer but it also doesn’t surprise me that there isn’t support for her doing that,” Harrison said.

“She really went out on a limb with that throne speech, which essentially adopted most of the major policies of her opponents in the election. Once that failed, it made it more difficult for her to continue as opposition leader in opposing policies she had just embraced and also as a leader of a party whose previous positions she had just repudiated.”

“There are a lot of strong, experienced people in caucus who weren’t expecting to be in opposition and who have presumably been thinking about this possibility since the day of the election. It’s in their interest to choose a leader very fast… not to drag this out because the NDP has, with the support of the Greens, the narrowest and most tenuous of governing majorities and that’s with what I expect will require some unusual actions by a speaker,” Harrison said.

"So how long will that government last? I don’t think it’s going to be four years. Given that there could be an election in 12, 18, 24 months, it’s in the interest of the party to choose a new leader very soon and, ideally, to have that leader show their stripes in opposition, as leader of the opposition, when the legislature is convened by the lieutenant governor on request of the premier."

According to the Liberal Party constitution, a meeting of the party executive must be called within 28 days to set a date for and plan for a leadership vote.

In a leadership vote, each member is entitled to one vote and the votes are weighted such that each riding association has the same percentage of votes in electing the new leader.

It’s unclear what Clark, 51, plans to do in the future.

“She has been a very effective politician. She’s feisty. She’s young. She left politics once before, made a career for herself in the wings, and came back. I don’t know whether she would consider a run at federal politics. I think she is ending her career in provincial politics at this point,” Harrison said.

— with files from Mike Howell