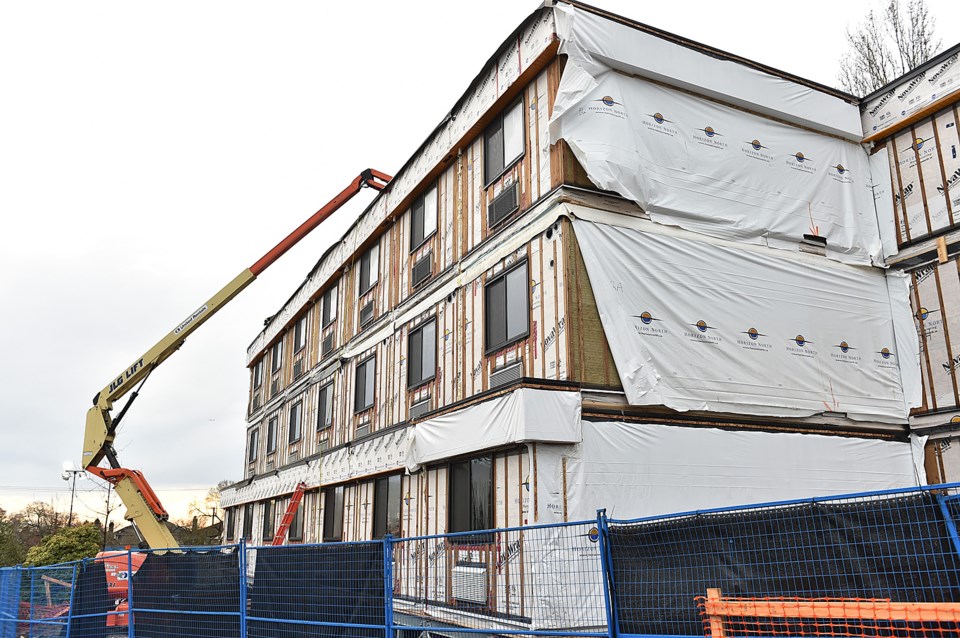 A south Vancouver church is reaching out to the non-profit housing manager of a soon-to-be-opened 78-unit modular housing complex in Marpole for homeless people and wants to donate food and supplies to tenants once they move in next month.

Felix Loo, a member of West Side Baptist Church on Ash Street, said it was important to him and other members of the congregation to welcome the area’s new neighbours after the pushback from other residents who don’t want to see the complex built.

“We don’t want to send a message that this group of people are not welcome in our community,” said Loo, who said the church is about 10 minutes from the modular housing site at West 59th Avenue and Heather Street. “As a church in the community, I think one of the most important mandates is to reach out to this group of people — not for the purpose of proselytizing, but to actually try to integrate them into the community.”

Loo, who works for the BC Mental Health and Substance Use Services, said he wants to first check with Community Builders — the non-profit hired to manage the complex — before it builds “kits” for tenants. He imagines toiletries, some clothing and food will be provided in the donations.

Loo pointed out West Side Baptist has a sister church in Grandview-Woodland, the Grandview  Calvary Baptist Church, which is close to seeing the opening of a 26-unit housing project at East First Avenue and Victoria Drive for the homeless and those at risk of homelessness

Julie Roberts, the executive director of Community Builders, said she was “heartened” by Loo’s gesture, noting other neighbours in the area have come forward to get involved in welcoming the tenants. Roberts said she planned to get in touch with Loo.

“It’s going to go a long way for the tenants who are moving in to know that they’re welcomed by members of the community,” Roberts said.

Meanwhile, the Caring Citizens of Vancouver Society say they will appeal a B.C. Supreme Court decision Jan. 18 that dismissed the group’s petition, which aimed to stop the Marpole project.

Madam Justice Joyce DeWitt-Van Oosten dismissed the petition from the group, which is comprised of Marpole adults and children. DeWitt-Van Oosten said the City of Vancouver didn’t fail to provide proper notice of a hearing on a bylaw associated to the project.

She added that Gil Kelley, the city’s director of planning, acted within his authority to approve the project, which was done without going to a public hearing — a step the society wanted.

“We’re very disappointed, we’re very surprised,” said Derek Palaschuk, spokesperson for the society. “The reason we filed this petition was for the protection of our children. We believe there’s a real danger to them. That temporary housing shouldn’t be located across from an elementary school and so close to the high school.”

The society and others associated to the “right idea, wrong location” movement have pointed out the city’s agreement with B.C. Housing to establish tenant mix calls for a minimum of 20 per cent of units be made available to tenants identified as “service level three.”

Tenants classified as “service level three” are people who don’t engage with treatment or support services, have poor housekeeping and are susceptible to hoarding and poor hygiene.

They also have “an extensive criminal history indicating high risk to re-offend, can create security problems through aggressive and intimidating or intrusive behaviour [and have an] inability to sustain personal relationships.” They are prone to “frequent conflict with others, poor communication skills and history of property damage,” the agreement said.

Deputy city manager Paul Mochrie told the Courier Monday the city was “very pleased” with the court’s decision. Mochrie said the petition didn’t delay construction of the complex, although a separate court injunction was needed in December to ensure crews would not be impeded by protesters.

Asked about the society’s plan to appeal the decision, Mochrie said the city will continue working on the project to get it open for tenants next month. He said there had been no other court action against the city related to four other sites it has identified for temporary modular housing.

“We haven’t seen anything thus far that’s remotely like Marpole,” he said.

Last September, Premier John Horgan announced Vancouver would get $66 million to build 600 modular housing units for homeless people. The city’s last homeless count showed there were 2,138 people without a home.