A market research magnate hired without public tender by Vancouver city hall for a citizen polling website is defending his lobbying for the contract. Mayor Gregor Robertson launched TalkVancouver.com on Sept.
Jan 2, 2014 12:11 PM By: Bob Mackin 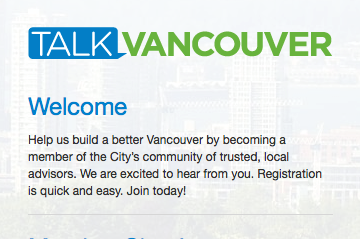 Vision Critical received a contract to launch TalkVancouver.com without tender.

A market research magnate hired without public tender by Vancouver city hall for a citizen polling website is defending his lobbying for the contract.

Mayor Gregor Robertson launched TalkVancouver.com on Sept. 11, 2013 at the Vancouver headquarters of Vision Critical. Anyone aged 15 and up who lives, works or goes to school in Vancouver was invited to sign up and give feedback.

Vision Critical executive chairman Angus Reid, named Robertson’s dollar-a-year technology and citizen engagement adviser, told the Courier he “first raised this concept with Gregor a couple years ago, I think it was at a Christmas party.”
B.C.’s Lobbyists Registration Act does not apply to municipal governments. “It was, in our view, an embarrassment that our software was not being used in our own home city where we pay a fortune in taxes and have the experience,” Reid said.

An open, public call normally happens for city contracts worth $75,000 and up. The price for the two-year Vision Critical contract is $152,080.

“What we built here in Vancouver is a very complex, unique piece of software that we’ve spent tens of millions of dollars on,” Reid said. “If you want to go on a little jihad about their tendering, go ahead. We had nothing to do with their tendering.”

Vision Critical was the only company named in senior public engagement adviser Tracy Vaughan’s March 13 Value Proposition on Community ePanels report, obtained via Freedom of Information. On March 14, Reid emailed Vaughan and copied Robertson, chief of staff Mike Magee and Vision Vancouver Coun. Andrea Reimer, who is the liaison to the Mayor’s Engaged City Task Force. He also sent Robertson a formal April 8 letter promoting Vision Critical and a handwritten note on April 12 to Robertson that said: “Gregor, Great to chat, let’s get together soon. I understand that you, Mike and Andrea can come here to meet and do a tour. See you then. Best, Angus.”

The tour happened May 7. On June 10, city hall amended its Sept. 1, 2012 professional services agreement with Vision Critical, to use the company’s proprietary Sparq community engagement software for two years with an option for a third.

“To have incubated something in this community that was intended to address a lot of the cynicism that exists in our local government and democracy, it makes one even more cynical and alienated in the process,” Hardwick said.

By comparison, the City of Toronto published a Dec. 13 notice seeking quotations from companies for “provision of an online consultation tool for the City Manager’s office.” The bid deadline is Jan. 8, 2014 for a one-year contract with a one-year option.
Hardwick said the data gathered through Talk Vancouver could be valuable for Robertson and his Vision Vancouver party’s 2014 re-election campaign.

Reimer did not respond to an interview request.

Said Reid: “It’s not my job to police how they use the software.”