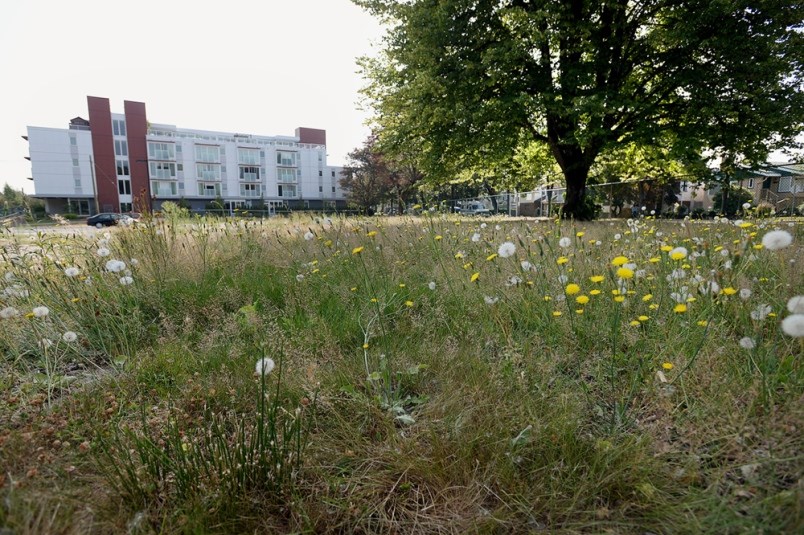 Little Mountain redevelopment site in a photo take in 2015. The city has identified a portion of the site as the next potential location for temporary modular housing. The complex would be on the site for approximately three years, after which it will be replaced by the scheduled development.Jennifer Gauthier

By October of this year, 46 Vancouverites currently living without a home will have safe and stable housing.

The City of Vancouver announced the approval of a development permit to build 46 new temporary modular housing units at the Little Mountain site on 137 East 37th Ave. near Main Street.

The homes are part of a $66-million plan from the provincial government to build 600 new units of temporary modular homes in Vancouver -- 400 of which are already in various stages of development.

Horizon North will start construction this month according to a June 6 press release from the city.

Each new home will have individual heating and cooling, and contain a kitchenette, bathroom and living/sleeping area in 320 square feet. Six homes will be wheelchair accessible.

The building will also include a large indoor amenity space with a commercial kitchen, common laundry facilities, an administration office and meeting rooms for the staff and residents to use.

The front yard of the building will have a shared amenity space with tables and gardening planters.

Coast Mental Health will operate the site. Support services will be available to tenants 24/7, on top of life skills training, volunteer work and employment preparation.

As part of the development permit process, the city hosted two community information sessions with approximately 117 people attending. Thirty comments cards and 16 emails in both support and opposition of the project were received from the public, the themes of which centred around community integration and safety.

As a condition of approval of the development permit, a Community Advisory Committee will be established to provide an ongoing forum for information sharing and dialogue between the community and the program partners. It will be comprised of Coast Mental Health, community members and representatives from Vancouver Coastal Health, BC Housing, Vancouver Police Department and the City of Vancouver. The community liaison is available for ongoing community questions during the construction phase until the CAC is convened just prior to occupancy.

The building will be on this site for approximately three years, after which it will be replaced by a permanent social housing development. The city says phase one of the Little Mountain redevelopment, which includes 164 units of permanent social housing as well as the development of market housing and commercial retail space, won’t be delayed.  Pending the application and permitting process, construction is anticipated to begin in late 2018.