“Well balanced” is how the chairwoman of the Grandview-Woodland Area Council describes the city’s draft community plan for the East Vancouver neighbourhood. The 242-page plan was released this week following a years-long, controversy-laden process.
Jun 28, 2016 1:01 PM By: Naoibh O’Connor 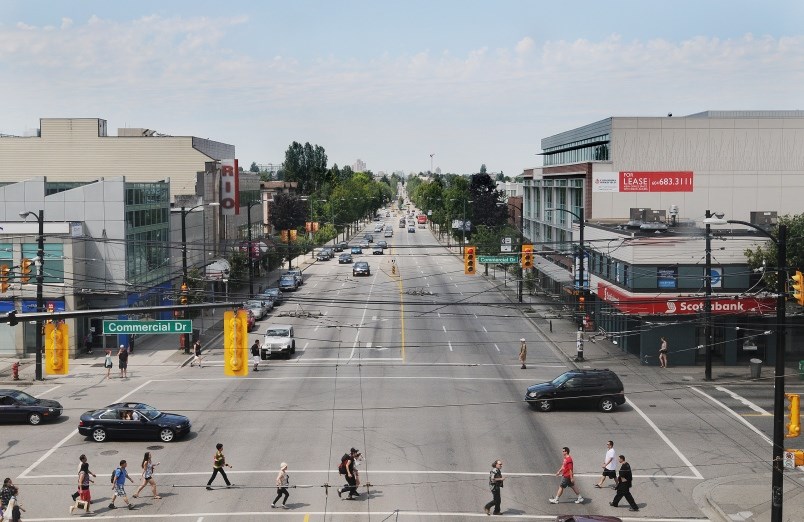 “Well balanced” is how the chairwoman of the Grandview-Woodland Area Council describes the city’s draft community plan for the East Vancouver neighbourhood. The 242-page plan was released this week following a years-long, controversy-laden process.

“There are always going to be concerns, but the way I would characterize it is there is something for everyone and everybody had to give up something and often I think that’s the result of a balanced Solomon-like approach,” Dorothy Barkley told the Courier Monday.

The document comes more than a year after the Citizens’ Assembly released its 268 recommendations for the plan — most of which the city staff included in its report.

The city formed the assembly in 2014 to address the widespread community backlash over proposals outlined in its emerging directions back in 2013. They included the prospect of a 36-storey tower at the Safeway site, as well as the possibility of 22- to 28-storey highrises at other sites near the Broadway-Commercial Drive SkyTrain station.

The newly released draft plan attempts to “strike a balance” between various interests, according to city staff, through an array of proposals that include a reimagined Safeway site with fewer towers, policies that attempt to preserve Commercial Drive’s character and recommendations that would scale back the controversial Boffo-Kettle concept.

City staff unveiled the plan to the Citizens’ Assembly, of which Barkley is a member, on Saturday, which was followed by a media briefing Monday.

The plan covers an area bounded by Clark Drive, Nanaimo Street, East 12th and the Burrard Inlet, and addresses subjects ranging from housing and transportation to public spaces and the local economy.

Over the next 30 years, the plan anticipates 9,500 new residents in Grandview-Woodland, 7,000 new homes and $800 million worth of public amenities.

Kent Munro, the city’s assistant director of planning for the midtown region, said the plan is the result of years of work and consultation with the public.

“We feel it’s a good balance of the challenges that are facing this community and the city as a whole in a way that still respects the essential qualities of the neighbourhood that people really care a lot about,” he said.

The vision for the Safeway site includes two 24-storey towers, 12-storey buildings around the edge, space for a grocery store, small retail, offices and a public plaza. The Citizens’ Assembly had proposed allowing for a 12- and an eight-storey building on the site, but staff said this would downzone the site and it wouldn’t work economically.

Barkley said the city’s sketch of the Safeway site concept looked “quite wonderful” and she suspects it would be “very much welcomed” in the neighbourhood. She said staff were very sensitive to shadowing and building transitions.

Recommendations for the Boffo-Kettle site addressed some residents’ concerns about height and density by dropping the proponents’ vision for a top height of 12 storeys to nine storeys and shifting density westward. But staff noted this concept would not be self-supporting and would open up a “financial gap” for the project.

For Commercial Drive, staff recommend retaining the existing mixed-use zoning of four storeys or less for the core blocks of the Drive between East Fifth and Adanac Street, while heights up to six storeys would be allowed on the northwest, northeast and southwest corners of East First and Commercial Drive.

A new “pace of change” mechanism for rental buildings in the housing policy means there would be a cap on the number of development applications or inquiries the city would accept in any given year for the first three years of the plan, after which point staff would report back to council on how the process was working.

“The thing that gives me the greatest confidence is that the planners talked about the fact that there will be a ‘pace of change’ restraint. So, if I understand it correctly, that would suggest that you can’t have developers running all over the neighbourhood buying up and demolishing buildings. That there will be a restricted pace of change in the neighbourhood,” Barkley said.

Her biggest concern is that the plan envisions 9,500 new residents over the next three decades, but it doesn’t promise what she considers enough green space.

Nine parks will be improved, according to the plan, with another five new or improved plazas. Barkley said more parks are needed “especially when you consider the schools in East Vancouver or Grandview-Woodland anyway, have, for the last few years, been closing off their playing fields. And those playing fields have served as parks. So that’s a huge issue if you’re planning on expanding the population.”

The Commercial Drive Business Society, meanwhile, has launched a petition opposing any effort to install a dedicated bike lane on the Drive, which it considers a threat to the viability of small businesses.

When asked about the business society’s concerns, Munro said the core of Commercial Drive from a land use perspective will stay the same, with no change except at the ends and at First Avenue.

“So the zoning will stay the same, and the thinking is that the pace of change, the way that the Drive feels today and has felt for a number of decades is going to continue,” he said. “The plan does support and has policies to support a more complete street along Commercial Drive, recognizing that there are a number if modes of transportation — there’s biking, waking, cars and transit. The goal of the plan over the next 30 years is to get Commercial Drive to be a more complete street. That can and will mean improvements to the public realm for pedestrians — for walkers and also for bikes, the details of which have not been worked out yet. There’s 30 years to do that. It will happen through the life of the plan.”

The city will be hosting open houses about the community plan in coming weeks, beginning on June 29, before it goes before council in the fall.

Barkley noted her comments reflect her first impression of the plan, but GWAC members are now pouring through the details to form a more complete assessment. GWAC is hosting its own public meeting about the community plan on July 11.