Candidate who listed Chinese name in nomination papers will also get to keep it on ballot
Sep 21, 2018 9:26 PM By: Mike Howell 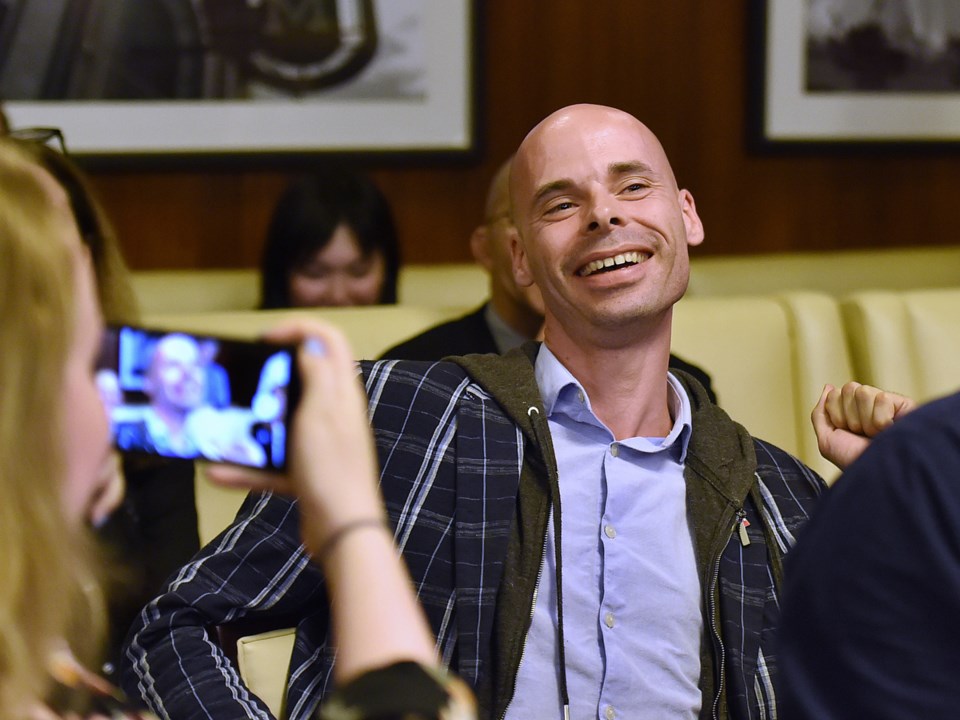 Independent mayoral candidate Jason Lamarche let out a hoot Friday at city hall when his name was drawn first from a raffle barrel used to determine the order of candidates’ names on the Oct. 20 election ballot. Photo Dan Toulgoet

The city declined a last-minute request Friday from a group of independent candidates to place numbers next to candidates’ names on the Oct. 20 civic election ballot.

Council candidate Brandon Yan, who is running with OneCity, will also get to keep his Chinese name listed next to his English name on the ballot, despite concerns raised this week by two Coalition Vancouver candidates saying it gives him an advantage at the polls.

Both cases were before the city as it prepared Friday to hold a random draw to determine which order candidates would be listed on the ballot. In previous years, names of candidates were listed in alphabetical order.

City manager Sadhu Johnston cited several reasons for the decision not to place numbers next to the 158 candidates running for mayor, council, school board and park board.

“The main one is the size of the ballot,” Johnston told the Courier during the city’s draw at city hall Friday. “There’s a lot [of information] already on the ballot, and as soon as you add a column with numbers, it shrinks the names even smaller.”

As well, he added, there was some concern that giving each candidate a number would repeat the “order bias,” which is something the city is attempting not to do this election by having a random draw of names.

“There was also concern about the association with certain numbers,” Johnston said. “Certain cultures have very negative versus very positive associations.”

In Yan’s case, Johnston said the city’s election rules do not forbid candidates from using both versions of their names. In a previous election, council candidate Audrey Siegl of the Musqueam Indian Band used her Indigenous name on the ballot.

Rollergirl, Spike and Mrs. Doubtfire are also on the ballot.

Coalition Vancouver school board candidates Ken Denike and Sophia Woo filed papers in B.C. Supreme Court Tuesday challenging the city’s laws that allowed Yan to use his English and Chinese name on the ballot.

“We’re not blaming him for it, he said he got permission from them to do it,” Denike told the Courier earlier this week. “They should never have given him that permission…it’s really an unfair advantage.”

The five independent candidates who requested numbers be attached to names on the ballot were Adrian Crook, Erin Shum, Wade Grant, Sarah Blyth and Rob McDowell.

“We all want to focus on fair solutions,” their statement said. “Therefore, we are asking the city for a numbered ballot to help all Vancouverites better find the candidates they wish to vote for. Numbering the ballot would also help people who do not have English as a first language find the names they are looking for.”

Independent mayoral candidate Jason Lamarche will not likely face a problem of voters finding him on the ballot. A city staffer pulled his name first out of a raffle barrel that was used Friday to draw names.

The barrel was placed on the mayor’s desk and filled with pieces of paper marked with each candidate’s name. Lamarche, who ran unsuccessfully for council with the NPA in the 2011 election, was sitting in the council chamber and let out a hoot when his name was announced.

“It’s definitely going to help because I’m at the top of the list,” said Lamarche, when asked whether being the first name on the ballot gives him an advantage over the 20 other mayoral candidates. “People are going to be looking at this pre-formatted list all throughout the election now, so that is going to continuously put eyes on me, which means I have to be at the top of my game.”

COPE candidate Anne Roberts won the 15th spot on the council ballot. A former school trustee and city councillor, Roberts believes candidates at the top of the ballot have an advantage but that party affiliation is more important.

“I belong to a party, I belong to COPE, I belong to something that people do know, that has a history,” she said, noting the city used a random ballot in the 1993 election and the winners were affiliated with a party. “That’s through all of Vancouver history—the party is the main thing that determines it.”

NPA council candidate Lisa Dominato, who currently serves as a school trustee, agreed party affiliation will play a role in her getting elected, but added that voters will also look at the leadership qualities of candidates.

Dominato said it is difficult to say whether her name listed 22nd on the ballot will make a difference in her winning a seat at city hall. There are 71 council candidates vying for 10 spots.

“I think voters are increasingly voting a-la-carte,” she said. “So some will vote slate, but others will be picking and choosing.”

Earlier this year, council passed a motion to replace the alphabetized order of an election ballot to hold a random draw of names. The purpose was to “level the playing field,” Johnston said Friday.

The current Vancouver council has several councillors whose surnames are at the top of the alphabet, including George Affleck, Elizabeth Ball, Hector Bremner, Adriane Carr and Heather Deal.

The full ballot with the list of names for mayor, council, school board and park board can be viewed here.

with files from Jessica Kerr