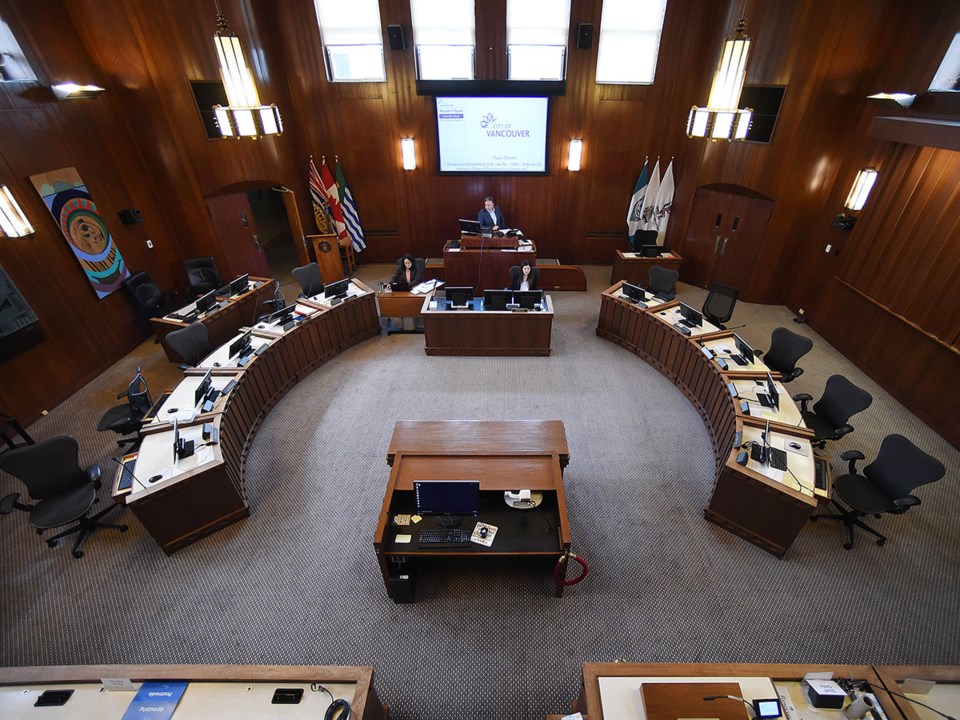 The City of Vancouver now has the authority to levy fines of $1,000 to $50,000 to operators of businesses and individuals who continue to ignore pleas and flout orders related to social distancing during the COVID-19 pandemic.

But city manager Sadhu Johnston said Monday during a council meeting that his office had no immediate plans to issue a formal order that would allow police officers to ticket individuals still participating in public activities such as a soccer game.

The same goes for the crowded sidewalks of the Downtown Eastside, which has been a worry for public health officials about the potential spread of the virus in the neighbourhood.

“We are limited in our intent to ticket individuals for gathering,” said Johnston, noting signs warning people to keep two metres apart and park board staff informing pedestrians about social distancing along such places as the city's seawall has been the present approach.

Public education campaigns about the dangers of the virus and the importance of avoiding crowds are also underway in the Downtown Eastside.

Johnston also cited concerns about the infringement of citizens’ rights under the Charter of Rights and Freedoms in ticketing individuals and taking police officers away from other more pressing duties in the city.

“Having police officers trolling parks and ticketing people is at this point — given all of their other work — not a top priority,” Johnston said. “They don’t have the bandwidth to do that.”

Still, he added, city council’s unanimous decision Monday to enhance its week-old state of emergency bylaw with penalties and enforcement powers gives the city the authority to ticket individuals, if required.

Johnston described scenarios where enforcement could be taken against businesses, with a nightclub filled with hundreds of people hit with a stiffer penalty than a café owner allowing a person to drink a cup of coffee at a café counter.

So far, as Johnston noted in a news conference Sunday and at Monday’s council meeting, many licensed premises have complied with orders to shut down or to only operate take-out or delivery services.

Johnston said city inspectors checked 1,600 businesses over the weekend and only issued 14 orders. He said the city has 20 property use inspectors to ensure businesses comply with orders.

“Our intention would be to take a light touch to start, with the order being posted and the order being given verbally,” said Johnston of the city’s approach to enforcement. “We don’t intend to go out and take a heavy hand. A lot of people are learning about these things and what’s expected.”

Types of businesses under orders to shut down now include personal service businesses such as salons, spas and tattoo parlours. Provincial Health Officer Dr. Bonnie Henry issued a province-wide order Saturday for their closure.

Monday’s council meeting was the second to be conducted virtually, with Johnston and councillors calling in by telephone while Mayor Kennedy Stewart chaired the meeting from his desk in the council chamber.

Deputy city manager Paul Mochrie, city lawyer Grant Murray and Darrell Reid, who has stepped away from his duties as the city’s fire chief to head up a task force and emergency agency, were also dialed in by telephone.

In answering a question from Coun. Christine Boyle about virus testing for emergency personnel on the front lines of the COVID-19 outbreak, Reid said a private company connected to the Vancouver Police Department is arranging for expedited testing.

In the Downtown Eastside, meanwhile, Johnston said the city is working with a task force that includes B.C. Housing and Vancouver Coastal Health to accommodate residents who can’t self-isolate.

“So if there is someone who is homeless or living in a shelter that is needing to be in isolation, they are being placed in hotel rooms,” he said, noting “there’s a pretty good number of hotel rooms being secured for that purpose.”

He said community centres, which were closed last week, are also being set aside to accommodate people who can’t self-isolate, including those who may have to evacuate a shelter, if a person contracts the virus.

All shelters in Vancouver have been at 90 to 100 per cent capacity for several years. In addition, the city’s homeless population is at its highest ever, as last year’s homeless count showed in recording more than 2,200 people without a home, many of whom with health issues and live in the Downtown Eastside.

The park board announced over the weekend that it was closing tennis courts, skate parks, basketball courts and taping off outdoor fitness equipment in an effort to stop the spread of the virus.

Pools, ice rinks and gyms have also been closed, as have parking lots at many of the beaches and at Queen Elizabeth Park.

Dr. Henry announced Monday that 48 more people contracted the virus, for a total of 472 cases in B.C. Thirteen people have died, 33 are in hospital, 14 in intensive care and 100 people have recovered.