City of Vancouver to become a living wage employer

Supporters rallied in support of motion before council vote
Jul 8, 2015 11:59 AM By: Naoibh O’Connor 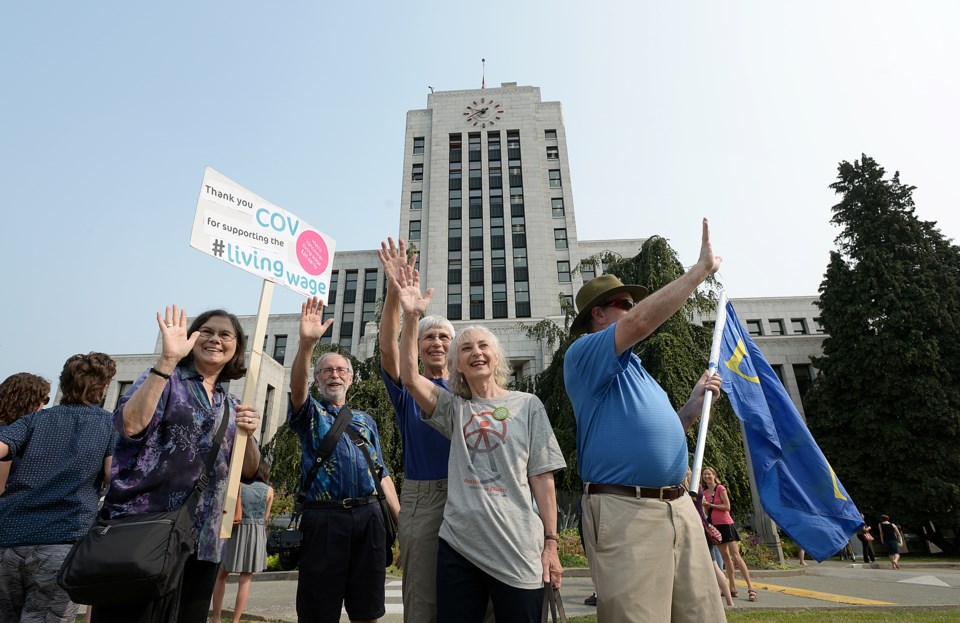 Gloria Roque earns a living wage as a teacher, but since she works at an inner city school, she knows many parents who don’t.

That’s why Roque was among those who rallied at city hall Wednesday morning in support of Mayor Gregor Robertson’s motion for the City of Vancouver to become a certified living wage employer. The motion passed unanimously.

Metro Vancouver Alliance and Living Wage for Families staged the rally, which was timed to precede council’s discussion on the motion.

It’s estimated both wage earners in a four-person family must earn $20.68 each per hour to meet the definition of a living wage in Metro Vancouver, which stretches from West Vancouver to Langley.

Roque wrote “dignity” when asked by organizers what a living wage meant to her.

“I make a living wage and I think everyone else should, too,” she said.

Deborah Littman is the lead organizer for Metro Vancouver Alliance, an organization of faith groups, labour unions and community advocates.

“Basically the whole community is hurt when other people don’t make enough to live, not just those workers. It impacts children’s education, it impacts people’s health, it impacts their ability to participate in the wider community,” she said. “It affects the strength of the local economy, so in that sense, it’s an issue that everyone has a stake in solving.”

Littman dismisses arguments that instituting a living wage would hurt the economy and low-wage earners.

“This is something that is pulled out any time you raise the minimum wage or when you try to introduce better wages for people. ‘Oh it’s going to price people out of the market, people are going to lose jobs.’ All the evidence shows that’s not true,” she said.

Littman worked on the living wage campaign in London, England, and she said there are now 1,500 employers who pay it, including major banks and retail chains.

“None of them have lost jobs because of that. What they find is if you pay people decently, absenteeism goes down, turnover goes down,” Littman said. “The quality of work goes up and most businesses benefit by paying the living wage as opposed to losing from it.”

While many city workers already earn a living wage, Littman said it will help the few who don’t and, more importantly, “it sets a standard.”

“It says this is what the City of Vancouver thinks is the right rate to pay and other employers and other municipalities can follow suit.”

Patrick Calderon, a recent graduate with a degree in political science and theology, also attended the rally and was considering becoming involved with the Metro Vancouver Alliance. He wore the pink-coloured Living Wage for Families button that reads: “Work should lift you out of poverty, not keep you there.”

“I believe that people should be able to live decently in the city,” he said. “I know a lot of people who live in rather sub-standard conditions who try to make ends meet, who work very irregular hours. I don’t think that should be the case. I really do think it’s not a radical idea that if a person works 40 hours, they should not be living in poverty. That’s a very reasonable and sensible thing to affirm and say.”

Before the vote, NPA Coun. Elizabeth Ball said the most important thing about the motion for her was children.

“Adults can kind of cope or scrape along or deal with whatever issues are in front of them and children can’t,” she said. “If parents are less stressed, they’re happier. If children can be fed before they go to school, they do much better. So a living wage for me is actually a living wage for children.”

Mayor Gregor Robertson said he was encouraged by councillors’ support of the motion.

“This is a very practical response to the steady rise we’ve seen in the cost of housing, transit and the cost of living across Metro Vancouver while wages have stagnated. Full-time work should provide families with a basic level of opportunity and economic security. It’s important for Vancouver to do its part and this living wage is our next step."

He also called on the provincial government to raise minimum wage and welfare rates, calling them “two big steps the B.C. government could take to deal with inequality.”

“The challenges that we face with poverty, which as Coun. Ball says impacts our children with over 20 per cent child poverty, are all tied to the fact that so many people are having a tough time making ends meet.”

City staff will now report back on steps needed to achieve certification as a living wage employer by the Living Wage Campaign, which is a Vancouver-based organization that has already certified a range of employers, including the Vancouver City Savings Credit Union, the City of New Westminster, SAP and the United Way. It usually takes several years to implement, according to a city press release, starting with direct civic employees before being extended to contract employees.