City to apologize for historical discrimination against Chinese people 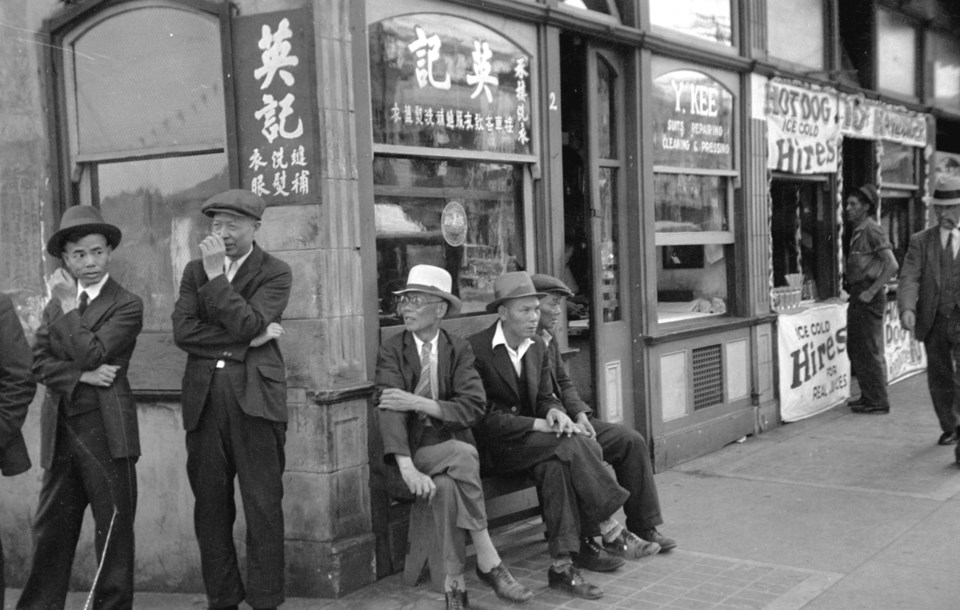 A group of men sit outside Y. Kee tailoring and laundry business in 1936. Photo City of Vancouver Archives Bu N158.2

Vancouver's civic government will deliver a formal apology next April to Chinese people for the legislated discrimination enacted decades ago by previous city councils.

In a unanimous vote Wednesday, the 2017 version of city council approved a staff recommendation to host a large-scale event in April that will acknowledge the racist policies of city leaders in power between 1886 and 1947.

"You can never become a better society — a better place, a better city — unless you acknowledge what have been your errors, and what have been the wrongs," said Green Party Coun. Adriane Carr, who sits on a council that includes Chinese councillors Raymond Louie and Kerry Jang.

The apology will be delivered in a Chinese dialect spoken by early Chinese residents and in English, and displayed on a large screen at a yet-to-be determined location.

Mayor Gregor Robertson will likely read the English version, but it's unclear who will read the Chinese apology, although the mayor has spoken a few phrases in Chinese at various city events.

Council's vote Wednesday came after listening to speakers from the Chinese community share their experiences and those of their deceased family members in what was an emotional afternoon at city hall.

Cynthia Kent spoke on behalf of her deceased parents, Arthur and Vivian Jung. Kent's Merritt-born mother was the first full-time teacher of Chinese descent hired by the Vancouver school board.

But as a student teacher, Kent said, her mother was not allowed to swim in Crystal Pool when pursuing her life-saving qualifications. Kent keeps a letter her father received from a Vancouver city clerk dated Sept. 27, 1946 that denied his request to be added to the City of Vancouver's voters' list.

That decision came, she said, despite her Canadian-born father, who lived and worked and owned property in Vancouver, having served in the Second World War.

"[My parents] would say that while a formal apology is gratifying, on its own, it's not sufficient," said Kent, noting the need to adopt a series of other recommendations in the staff report, including educating the wider public about the dark period in history and acknowledging non-Chinese people who looked past the racism. "My mother always talked about her principal, Jim Lightbody of Tecumseh school, who was the one who insisted she be hired by the school board."

George Ing, 85, was born and raised in Victoria. He recalled his job from about 10 years old was to pick up his parents' welfare cheque.

"When I went to pick up the cheque, people would look at me and make comments about vermin on the society — they didn't do that to anyone else," said Ing, who later served 32 years in the Canadian Forces. "It didn't do wonders for my self-esteem."

As he got older, he was told by his family and others in the Chinese community to "keep your head down" and avoid disputes. The former jock was also told by his coaches not to argue with referees, to again keep his head down.

Ing said he didn't always take their advice and got into some trouble, which he didn't elaborate on. Fast forward to becoming a father of two sons and he remarked how the city has progressed since his childhood.

He noted the election of Louie and Jang to council, along with the presence of social planner Baldwin Wong and assistant city manager Wendy Au in the audience.

"My two boys are well-adjusted, they're educated, they're articulate. they're good citizens, they contribute back to society — they do a lot — and I didn't have to tell them to keep their heads down," said Ing, who didn't realize the full extent of previous councils' legislated discrimination until he read the staff report.

The report shows councils of the past were directly responsible for decades of discrimination against Chinese people. In 1886, the year the city was incorporated, council disqualified the Chinese from voting.

At the time, no Chinese person could run for public office or own property in some areas of the city. Chinese people were also prohibited from becoming a lawyer, doctor, nurse or banker, among other professions.

Vancouver didn't grant municipal voting rights to the Chinese until 1949, some four years after Canadian-born Chinese members of the Canadian Forces returned from the Second World War.

The city also repeatedly lobbied the federal government to pass discriminatory immigration policies, including adopting formal legislation to exclude the Chinese from immigrating to Canada.

"Anti-Asian political agitation and racial violence culminated in a big riot at Brighouse Estate near Coal Harbour in 1887 and again in Chinatown in 1907," the report said. "These riots occurred with the knowledge and sometimes presence of the city mayor and aldermen. Other groups such as the Japanese were also targeted during these riots."

Two of the speakers Wednesday, King-mon Chan and Andrea Lum, connected a controversial condo development proposal for 105 Keefer St. in Chinatown to the racism of the past and argued approving it is not in the spirit of reconciliation.

"How can reconciliation happen as working class Chinese people are being marginalized by gentrification in Chinatown by market housing projects?' Chan said.

Beedie Development Group's proposal will go before the city's development permit board Nov. 6. A majority of council had earlier rejected a different version of the proposal, providing several reasons including it didn't fit in the cultural hub of Chinatown.

Louie, who initiated city staff's report on the apology in 2004, was one of the councillors who voted in favour of Beedie's proposal, noting the 25 units of social housing promised in the project.

In his closing comments Wednesday, Louie did not discuss Beedie's proposal but emphasized the need to "right the historical wrongs" legislated by previous councils.

"And that we ensure that we carefully look at our actions going forward, that we not allow [discrimination] to continue and speak out if we identify it in our current roles, " he said before recognizing former councillors Tony Tang and George Chow for their work on the apology file.