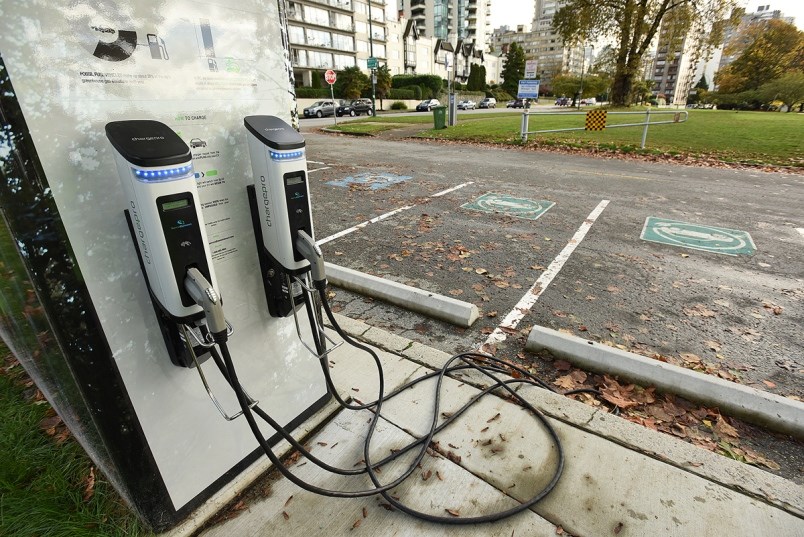 City council votes on a staff report next week that, if approved, will see Vancouver become one of the first cities in the world require new residential buildings to be 100 per cent electric vehicle ready.

The report, which outlines the expansion of electrical vehicle charging infrastructure to speed up Vancouver’s transition to zero emission vehicles, goes before council March 14.

It calls for all parking spots — excluding visitor parking — to be equipped with charging infrastructure, a significant increase over the current requirement of 20 per cent.

“Our goal is to be 100 per cent renewably powered by 2050 but we can’t do it without providing the infrastructure people need in order to make the transition to electric vehicles cost-effective and practical,” Mayor Gregor Robertson said in a March 9 press release. “Vancouver is already home to the largest public EV charging network in the province and I urge council to approve this report so that we can take our EV infrastructure to the next level.”

In 2014, a total of 17,000 new electric vehicle-ready parking stalls were created in homes across the city, which surpasses the required 20 per cent or 11,000 spaces.

In 2016, city council approved the Electric Vehicle Ecosystem Strategy. The city says its aim is to build an infrastructure network at homes, workplaces and in public spaces that will make charging an electric vehicle a hassle-free experience.

The city recently approved a new Curbside EV Charging Pilot to provide charging access for commercial businesses and single-family homeowners who do not have access to off-street parking.

The city’s Green Homes Program, meanwhile, requires all single-family homes be outfitted to allow for the easy installation of charging stations in the future.