City will consider up to 12 storeys for Kettle site 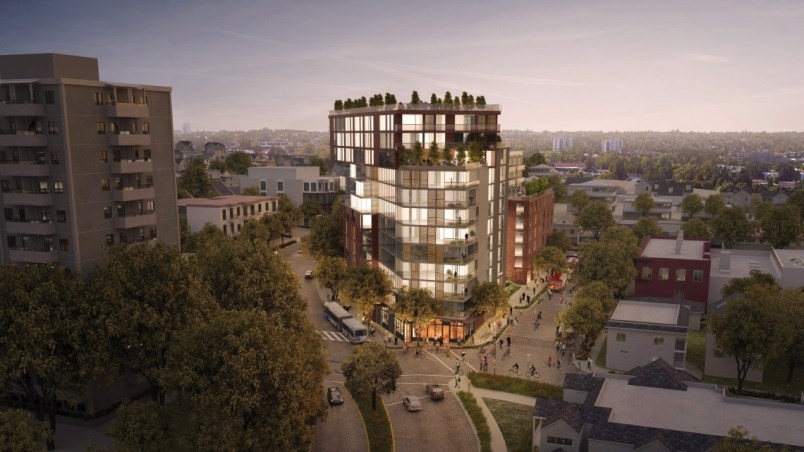 Preliminary rendering for the Kettle-Boffo project.

That’s how Nancy Keough, executive director of The Kettle Society, felt after council voted in favour of the Grandview-Woodland Community Plan Thursday.

The final motion, years in the making, features multiple clauses, including one that will allow council to consider up to 12 storeys on the Kettle-Boffo site at Venables and Commercial Drive.

Staff had recommended scaling back allowable height on the property to nine storeys, in response to some residents’ complaints, but council was persuaded to support proponents arguing that 12 storeys is needed to avoid a financial gap in the project, which is billed as self-financing.

The Kettle Society, which offers housing and services to people with mental illness, had been unable to secure government funding to realize its goal of expanding its services and building supportive housing units, so it partnered with Boffo Properties.

Their vision is for 200 one- to three-bedroom market housing units, 30 supportive housing units for the Kettle to own and operate, and a larger space for its other services.

A rezoning application has yet to be filed with the city, but Boffo Properties released preliminary renderings in February to give residents a more concrete idea of what was being considered.

Critics, including those from the No Venables Tower coalition, maintain the development will be too high and too dense. They had hoped council would delay adoption of the community plan.

Keough and Daniel Boffo, principal of Boffo Properties, were in the front row at city council for the vote.

“I was really relieved. It never felt like a sure thing. There’s so many voices but [council], I think, felt it was the right thing to do and we’re really happy,” Keough told the Courier Thursday afternoon.

“There’s been a lot of consultation and you really don’t know until the end where things are going to end up. But [Wednesday], at council, there were so many supporters there… from Judy Graves to some of our members. And I really felt then that council would hear that. And it’s great. They did.”

Keough said supporters and users of The Kettle’s services have asked her every day for years what’s happening with the new building.

As for critics, Keough said some people are never going to want to see change.

“But I do know that on our other buildings and projects, we’ve had opposition before with people who had a lot of concerns and fears, but once we’ve been opened that’s completely turned around — a 360. And we’ve had people volunteer in our transition house that protested it going in. So I have a lot of faith in folks.”

Boffo said he, too, is relieved by council’s decision. He said staff worked tirelessly on the community plan for the past five years.

“And council… Coun. De Genova, Coun. Ball and Vision showed true leadership today in backing council’s mandates behind the housing and mental health crises that we're dealing with. I admire the leadership that they showed,” he said.

Boffo anticipates it will take two to four months to complete the rezoning application and file it with the city.

“We want to work very hard towards a rezoning application and work very closely with staff to have that in. We’re going to continue with the process that we’ve done for the past five years and continue to consult closely with both the community and the city,” he said.

“It’s going to be full bore ahead. If you’ve been following council, you’ve heard the need that exists. We’ve been at this for five years. It was a priority when we started five years ago, and it’s ever more so now. Realistically, we’re four to five years out now, unfortunately. To put that in perspective, from five years ago when we started our partnership, it’s going to take a decade to deliver. If we’re really in a housing crisis everybody talks about, that kind of timeline is ridiculous. But we’ll get there.”

Work on the Grandview-Woodland plan has been underway for five years, but it was almost derailed in 2013 after emerging directions were released.

Residents balked at the prospect of towers up to 36 storeys on the Safeway site and the prospect of many more highrises on sites near the Broadway-Commercial Drive SkyTrain station.

The city formed a Citizens’ Assembly to consult with the community and draft recommendations for the plan, most of which were included in the final document. The assembly, however, was not able to reach consensus on what should be allowed for the Kettle-Boffo site.

The overall plan is the 30-year vision for the neighbourhood. It covers subjects including housing, transportation, public spaces and the local economy. It promises to deliver 1,400 new secured market rental homes, 1,400 new non-market homes, 4,350 units of more affordable ownership options, and maintain the "vibe of The Drive," according to the city.