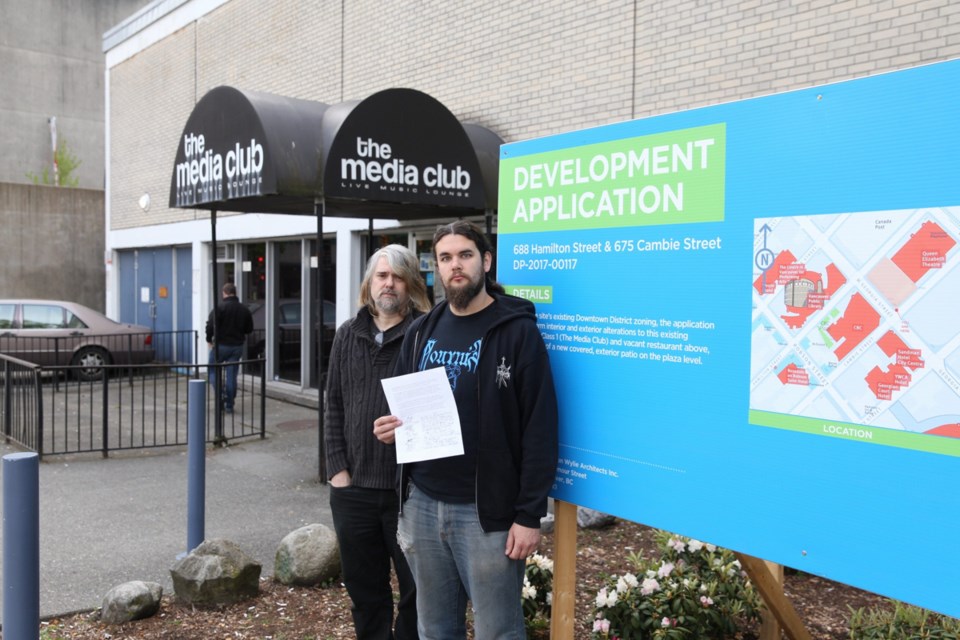 Joey Hockin (right) has a petition circulating to keep the Media Club, which is run by David Mawhinney (left), operating in its current state. Photo Kevin Eisenlord

Raise your hand if you think operating a live music venue without ever being able to use amplification sounds like a good idea.

Or permitting some styles of music, while not allowing others.

Those are the types of topsy-turvy scenarios Media Club manager David Mawhinney says he’s gone through over the past four years at the city-owned facility.

Faced with the impending closure of the Cambie Street venue, Mawhinney is now hoping a last-second petition will salvage the venue’s future.

“People are not happy,” Mawhinney told the Courier. “Show-goers are definitely not happy, but I think it’s more devastating for a lot of bands. The smaller bands, where are they going to go play next?”

Located at 655 Cambie St., the bar and surrounding property near the Queen Elizabeth Theatre are the subject of a proposal by the Browns Restaurant Group, which would transform the space into a restaurant, patio and re-purposed live music space where the Media Club currently operates.

Somewhat astonishingly, the city’s request for proposal in 2015, which kicked off the process, stipulated that “no live interior performance will use amplification.”

The petition to keep the venue alive is being spearheaded by Joey Hockin, whose Journeyman Productions promotional company has done roughly 20 shows there in the last year. The gigs are predominantly metal and punk, and Hockin sees the Media Club as one of the lone options in the city for a variety of reasons: its proximity to transit, size (capacity is around 150) and the venue’s sound system.

There’s also the issue of the city’s dearth of live music venues, particularly those that book smaller shows and aren’t adverse to hosting metal or punk bands.

“Anyone can play there regardless of genre — it doesn’t matter how extreme, weird or unpopular it is, you can put on a show there,” said Hockin, noting his petition has garnered more than 200 signatures in a month. “There are minimal costs involved to play a gig there.”

Having taken over the bar four years ago, Mawhinney said the Media Club has been operating on a year-to-year lease with the city since 2011. He said he received notice last year that the lease wouldn’t be renewed.

Browns spokesperson Bruce Fox noted his company’s sensitivity to the situation. He said live music will continue in the Media Club but conceded how and what that looks like is very much up in the air. Fox said the city is taking the lead on what type of music programming will play out in the space.

Fox’s suggestion that the city has any hand in selecting the music is sharply at odds with the city’s version of things. In an email to the Courier, civic theatres director Sandra Gajic said the city “doesn’t influence programming at any venues.”

When asked about the nature of public feedback around the proposal, Gajic added, “People are very excited about Browns Social House taking over the restaurant on [Queen Elizabeth Theatre] Plaza. Media Club will remain the live music venue and is not part of the restaurant.”

Vancouver rock band Hazel Blackburn doesn’t see it that way. They voiced their opposition to the Browns proposal in an email to the city, part of which reads: “The continued hollowing out of the city and its arts community is a shameful, short-sighted strategy which will hurt Vancouver's reputation as a world class city, degrade civic life and engagement [and] accelerate the flight of the creative class.”

It’s that kind of disconnect that has Mawhinney calling shenanigans. He’s mystified over the fact six other pubs and casual dining restaurants are already located within a quick walk from the Media Club — the Shark Club, Library Square Public House and Devil’s Elbow, to name a few — and yet the city needs more offerings in that vein, in that area.

He’s asked for help from a handful of councillors, though only Coun. George Affleck has heard him out. A request for comment from Coun. Heather Deal, who sits on the city’s arts and culture policy council, was not returned.

Mawhinney said he’s been in touch with staff from Browns to explore partnerships for music programming at the space and was left with the feeling that it will be cover bands and jazz exclusively. While the city says live music will remain at the Media Club, Mawhinney said that argument is rooted in semantics rather than musical diversity.

“Browns is just doing what any big company would do given the opportunity,” he said. “It’s ultimately on the city council members who don’t particularly care about this form of art in the city.”

Even the timelines associated with project are seemingly askew. Gaijc suggests the space will be operational later this year. Fox, meanwhile, says the fall of 2018 is more likely.

“We’re really waiting for [the city] to define what they’re willing to set as a minimum standard [for live music] because we don’t understand what the minimum is,” Fox said.

Editor’s note: John Kurucz is a musician and has performed at the Media Club