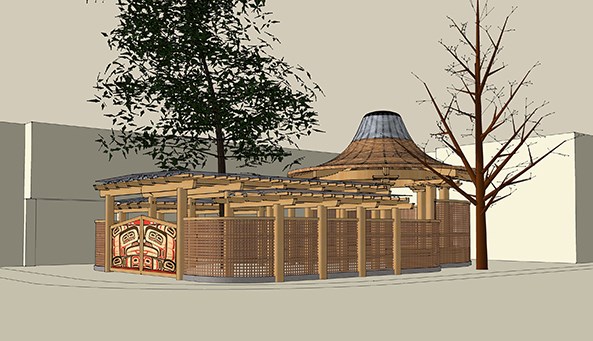 City council will decide Oct. 8 whether it will approve a cultural infrastructure grant of $85,000 toward the project.

A study has been completed, plans have been drawn up and the Vancouver School Board’s planning and facilities committee has recommended the board finalize an agreement between the school district, city and Britannia Community Services Centre Society.

Vancouver Native Housing sponsored a grant application of $100,000 from the federal government for the project. The submission to the city was for $150,000. Development and constructions costs are projected to reach up to $425,000.

Consultation with the community surrounding Britannia secondary and community centre would come next, says the centre’s executive director, Cynthia Low.

“Grandview-Woodland has one of the highest urban aboriginal populations in Canada and there’s very little on our site and in our neighbourhood that really reflects that cultural heritage here,” she said. “In the secondary school, a good 15 per cent of the students are aboriginal. In the elementary school, a good third of the students are aboriginal and every day on this site we have a lot of aboriginal families, everyone from babies to elders using our facility.”

A temporary carving facility was established after the 2006 Stanley Park storm when members of the community wanted to shape fallen trees.

The last project completed in the carving shed was a house pole.

“The pole for the aboriginal healing centre downtown was very profound for the neighbourhood and for the artist who worked on it.

Because the school was involved and the outcomes were so positive for the students, all the students, it really made us think,” Low said.

“Don Fiddler, the aboriginal [district] principal, was the one who really pulled us together and said look, this is something that has some real long-term and profound impacts that will benefit education, social development, community, arts and culture.”

Squamish carver Darren Joseph started his post as carver in residence at Britannia this week. He’ll be there until mid December.

The site for the pavilion falls on city and school board owned land.

The school board doesn’t anticipate needing to direct money to the construction of the pavilion. Operating and maintenance costs are projected to be $12,000 per year and would be shared between the city and school board, states a memo to the school board’s planning and facilities committee. Once grants are announced a major fundraising campaign would be undertaken and in-kind donations of timber would be sought.

The community centre will host an open house, Nov. 28.