Gender Policy A revised version of the policy that inspired raucous meetings last month will be considered by the Vancouver School Board’s education and student services committee June 11.
Jun 10, 2014 2:46 PM By: Cheryl Rossi 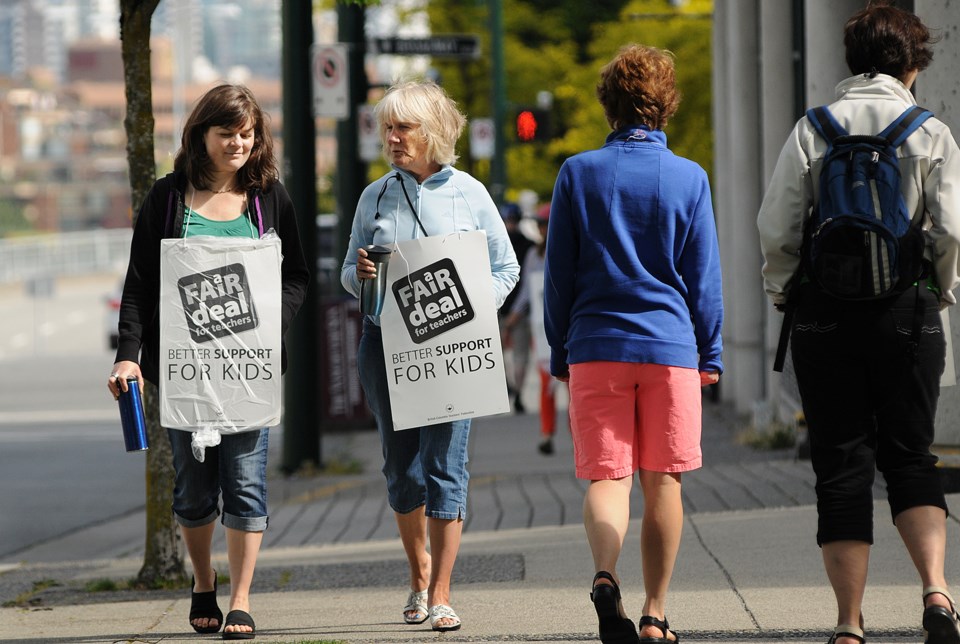 Teachers picketed outside the Vancouver School Board office, June 6, during the second week of their rotating strike. Photo Dan Toulgoet

Gender Policy
A revised version of the policy that inspired raucous meetings last month will be considered by the Vancouver School Board’s education and student services committee June 11.

“The biggest change, really, was about getting some clarity of language,” said VSB associate superintendent Maureen Ciarniello.

“A lot of the feedback we had was in the case of confidentiality, that we were perhaps putting a barrier between the school and parents and students, and that was not the intention, so we just tried where we heard that to do some rewording to make that clear.”

Ciarniello said words deleted in the draft attached to the June 11 meeting agenda could be kept after all.

But the first statement could be reinserted.

“Because people seem to be thinking that we’ve removed that intent, which is not what we were really trying to do,” Ciarniello said.

The VSB has had a policy about providing a safe, positive environment for students and employees, with a focus on those who are lesbian, gay, bisexual, transgender or transsexual, queer or questioning for 10 years.

If the trustees on the committee approve the policy, the guidelines are to be considered by the board June 16. The committee heard from more than 90 delegations last month, not including emails the VSB continues to receive, and won’t hear from speakers June 11.

Strike
Whether teachers support a full strike was to be announced after the Courier’s print deadline following a vote June 9 and 10.

Vancouver School Board superintendent Steve Cardwell told parents in a letter dated June 9 that the district is assessing the potential impact of a full-scale strike on provincial exams, report cards and summer school.

Camps in schools could be affected if teachers picket over the summer.

The BCTF must give 72 hours strike notice before teachers walk out, so the earliest a strike would start is June 16. The Ministry of Education states that if a walkout starts Monday, it would affect the last nine days of school before summer break begins. (The B.C. Public Service Employers’ Association previously announced secondary school teachers would be locked out June 25 and 26 and all teachers would be locked out June 27 unless a collective agreement is ratified beforehand).

As for students in Grade 10 to 12, the ministry states: