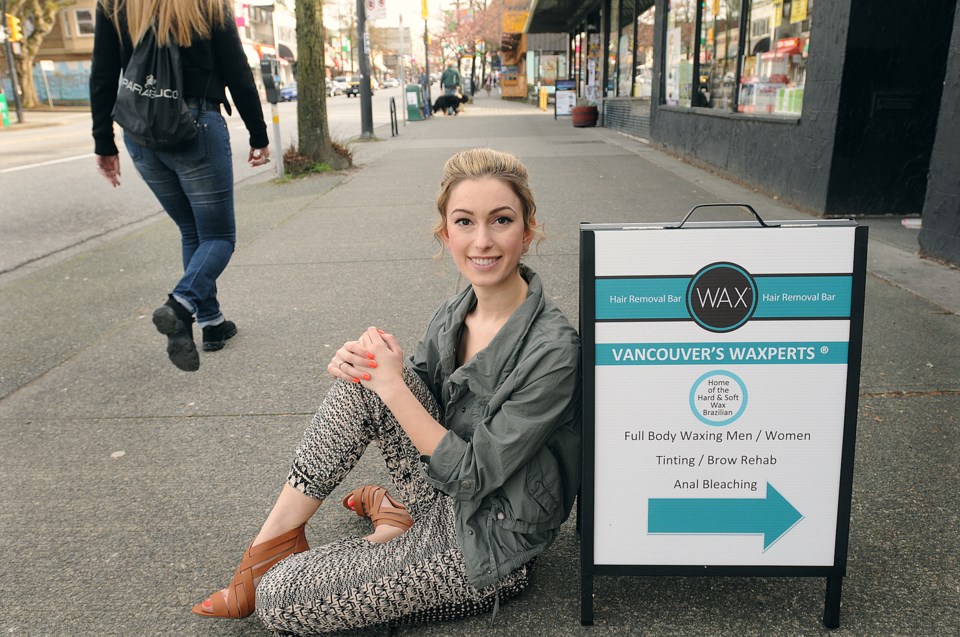 Jaden Stevenson, the 19-year-old owner of the Wax Hair Removal Bar located inside High Fidelity Salon, opened the business on Feb. 1 and has received complaints from a few neighbourhood women ever since.

“We got a call from the Commercial Drive BIA warning us that a couple people weren’t too happy about the sign,” said Stevenson.

“Luba sat down with the PAC board to talk about their concern and they told her that Tanya wasn’t part of their group and they didn’t have a problem with it,” Stevenson said.

According to Stevenson, letter writer Tanya Van, who refused to comment to the Courier, has sent friends to the business to harass staff and attempted to generate support from others.

“We sent her a cease and desist letter because she was going around the Drive to different businesses and using the term child exploitation, which is something we obviously don’t want to be associated with our business,” said Stevenson.

Stevenson said the salon understands Van’s points. “We didn’t agree with them. We have very different opinions,” she said.

She added once Wax Bar realized Van wasn’t part of PAC, they removed the tape from the sign.

Marlo Moore, owner of High Fidelity Salon, said Van has called the shop on multiple occasions and has harassed her. Moore eventually gave the woman her cellphone number to ensure employees wouldn’t be bothered, although other women have showed up in person to voice their opinions.

“Friends of hers have come in, yelling in front of clients and everything,” Moore said.

Moore has had two cancellations of hair appointments.

“My friend’s father just got diagnosed with colon cancer, so that made me decide to do it,” she said.

She said the service is provided only to customers aged 18 or older, which is the same policy used for Brazilian waxes, a service that was also controversial when it gained popularity.