Comparisons to Gretzky are unfair; let’s compare Pettersson to Ovechkin instead

When an incredible rookie enters the NHL, it is tempting to compare him to every great player from the past. For Elias Pettersson, the comparisons jumped remarkably quickly to The Great One himself, Wayne Gretzky.
Daniel Wagner Nov 20, 2018 5:43 PM

When an incredible rookie enters the NHL, it is tempting to compare him to every great player from the past. For Elias Pettersson, the comparisons jumped remarkably quickly to The Great One himself, Wayne Gretzky. Despite the outrageousness of comparing a rookie to the greatest player in NHL history, it’s weirdly understandable.

Pettersson has a similar build to Gretzky, seems to process the game in a similar way, and sometimes scores goals that look identical to goals Gretzky scored. Even Gretzky compared Pettersson to himself. But really, the comparison is completely unfair, as J.D. Burke eruditely explained for The Athletic. Invoking Gretzky puts impossible expectations on a young kid still growing and developing his game. There’s no way Pettersson can live up to that comparison and, when he falls short, it could invite unfair criticism.

So, let’s compare him to Alex Ovechkin instead.

Of course, the comparison is equally unfair, but it’s a comparison that Pettersson has made hard to avoid. On Monday against the Winnipeg Jets, Pettersson notched his 12th goal of the season in just his 17th NHL game, putting him in rarefied air with The Great Eight.

Pettersson is the first player since Ovechkin to score at least 12 goals in his first 17 NHL games, which is a pretty arbitrary number, but let’s go with it. On top of that, Pettersson is scoring goals in a similar fashion to Ovechkin, albeit from the opposite side of the ice.

Pettersson’s last two goals have been nearly identical one-timers on the power play from the top of the right faceoff circle. Ben Hutton placed each one on a tee after Nikolay Goldobin drew penalty killers over to the left side, and Pettersson hammered the puck into the top corner.

When you watch those goals, how can you possibly keep yourself from thinking of Ovechkin? While the Washington Capitals’ captain is adept at scoring goals in many diverse ways, his most well known type of goal is a power play one-timer from the left faceoff circle, which has come to be known as the Ovi Spot.

With Ovechkin claiming the left faceoff circle as his own, perhaps Pettersson can lay claim to the right faceoff circle. Instead of the Ovi Spot, it shall be known as The PetterZone. 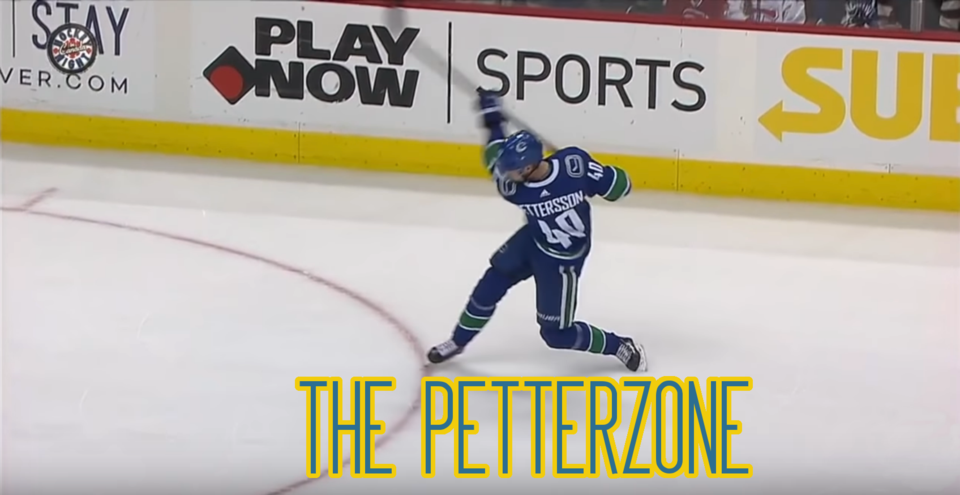 Pettersson is currently on-pace for 54 goals this season, which would actually best Ovechkin’s rookie season, though his 85-point pace falls short of Ovechkin’s ridiculous 106 points at the same age. Pettersson has a bit more support than Ovechkin as well, even with the likes of Boeser and Baertschi injured.

Ovechkin was 29 goals and 49 points ahead of the next best Capital, Dainius Zubrus. Pettersson won’t likely finish that far ahead of Bo Horvat, who is on-pace for 36 goals and 68 points.

The way Pettersson has racked up goals to start his career has the entire NHL excited, but it’s also somewhat surprising. The scouting reports before he was drafted all projected Pettersson to be a playmaker more than a sniper. His vision and passing ability were expected to be his calling card more than his shot.

There are some indications, however, that his assists should climb even if his goalscoring slows. While he’s finished on a high percentage of his shots, his linemates haven’t done the same. Apart from Pettersson, the Canucks have scored on just 6.3% of their shots with Pettersson on the ice.

Fans have complained about exactly that, suggesting that Pettersson needs new linemates, but when it comes to someone like Nikolay Goldobin, it seem more likely that he’s been unlucky. Goldobin has plenty of finish to his game, as he illustrated against the Jets.

Then there’s his opposite wing: Jake Virtanen could carve out a spot alongside Pettersson, Brock Boeser might return to that line after recovering from his injury, or Green could go back to Loui Eriksson. The way Pettersson distributes the puck, whoever lands on that line should get plenty of scoring chances.

Virtanen has the highest shooting percentage of those three, helping to fuel his hot start, but Boeser is the better sniper. Eriksson, meanwhile, found his scoring touch again after leaving Pettersson’s line. Whichever of those three lands on the line, the goals, and therefore assists for Pettersson, should follow. As the season progresses, Pettersson should start to look more and more like a playmaker.

So Pettersson isn’t really that much like Ovechkin. Really, any comparison to another NHL great isn’t going to line up exactly. So let’s take all of these comparisons with both a grain of salt and a spirit of fun. It’s fun that Pettersson is statistically comparable to other amazing NHl forwards, but we shouldn’t take those comparisons too seriously.