Popular Parliament flag program is an exercise in patriotism and patience
Jun 6, 2017 3:29 PM By: Michael Kissinger 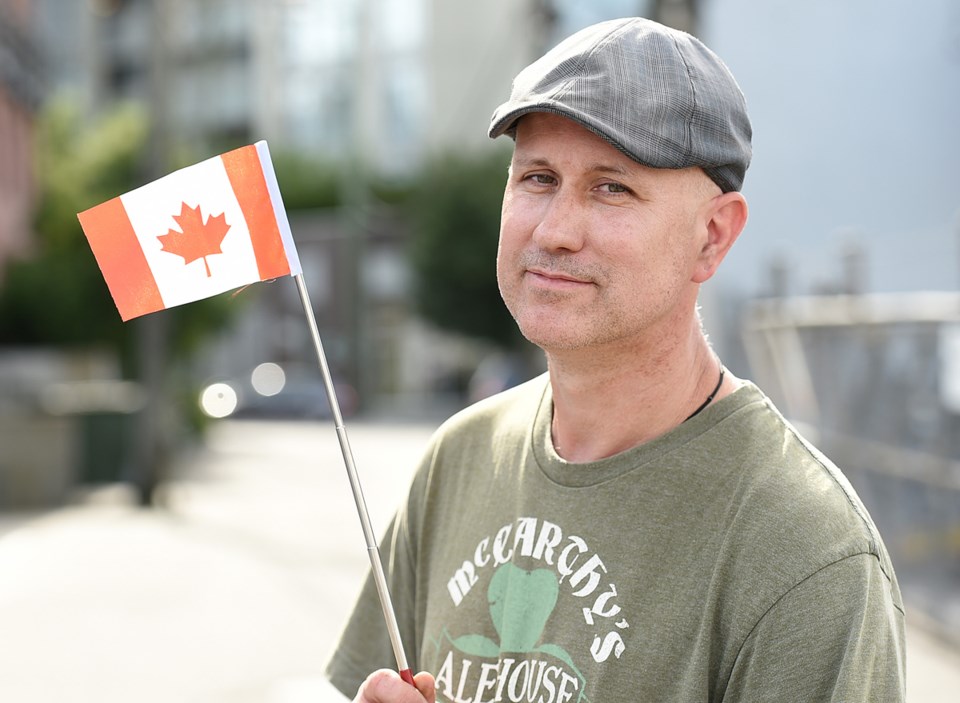 Oliver Read is one of thousands of Canadians waiting patiently to receive a Canada flag that flies over Parliament Hill. Photo Dan Toulgoet

When Oliver Read learned he could sign up to receive a free Canada flag from Parliament, he did what any patriotic dude would do. He went online, filled out the requisite application form, ticked all right boxes, put his hand over his heart and waited. Turns out, he’ll have to do a little more waiting. Last week, Read received notification that his application had been received, and the approximate waitlist time: 71 years.

The extended layaway plan wasn’t exactly a surprise to Read, who, full disclosure, is married to Courier reporter Naoibh O’Connor. Public Services and Procurement Canada’s website is upfront about the wait times to receive one of five flags that flies over Parliament Hill. So Read decided he better get his name on the list as soon as possible.

“That’s what lit a fire under me. I had to shave some years off of this somehow— you’ve got to do it right away,” Read says. “You do numbers on it, there’s only 365 [flags] every year, times 71 years. There’s not that many flags really being handed out to the Canadian public.”

Actually, there are even fewer flags than Read thinks.

Beginning in 1994, any Canadian resident living in Canada could apply to receive one of the five Canadian flags that flies on Parliament Hill — one on the Peace Tower, two on the East Block and two on the West Block. After each business day, the flags are taken down, folded and distributed to applicants. According to Public Works and Government Services Canada, more than 8,500 flags have been distributed between 1994 and 2014 while nearly 15,000 people remain on the wait list.

The Peace Tower flag is the most requested flag, while the wait to receive one of the other flags is slightly shorter at 56 years. The government restricts the flags to one per person and household. On the bright side, as the website notes, “changes of address will not affect your position on the waiting list.”

Still, Read remains hopeful that he can move up the daunting list.

“I don’t know if they adjust for any statistical curves… But how many of those people in line are going to make the mistake of not updating [their address] and/or die from lack of interest or some other snafu. They’ve got 71 years of snafus ahead of them… So I could get bumped up and hope for 70 years or 69 years, maybe.”

It should be noted that applying for a flag is not only a long commitment but a big one. The Peace Tower flag measures 7.5 by 15 ft. (2.3 by 4.6 m, if you want to be patriotic about it), and the website recommends a minimum flag pole height of 45 to 50 ft. Read admits his home does not possess a 50-foot flag pole, but he says he could “convert” one of the trees in his yard, if necessary.

And what are the chances Read will even be alive to receive his coveted flag and be rewarded for his superhuman patience? He’s optimistic about that, too.

“I’ll be 118, certainly in good health and ready to receive it — modern science, why not?”

He adds, “I’ll be in my wheelchair, and I suspect I’ll be receiving it from another Trudeau prime minister. A girl this time, right? Why not, it’ll be 2088.”

For details on how to apply for your own Canada flag, go to tpsgc-pwgsc.gc.ca.

Note: A request to speak to a government spokesperson was not fulfilled by the Courier’s press deadline.