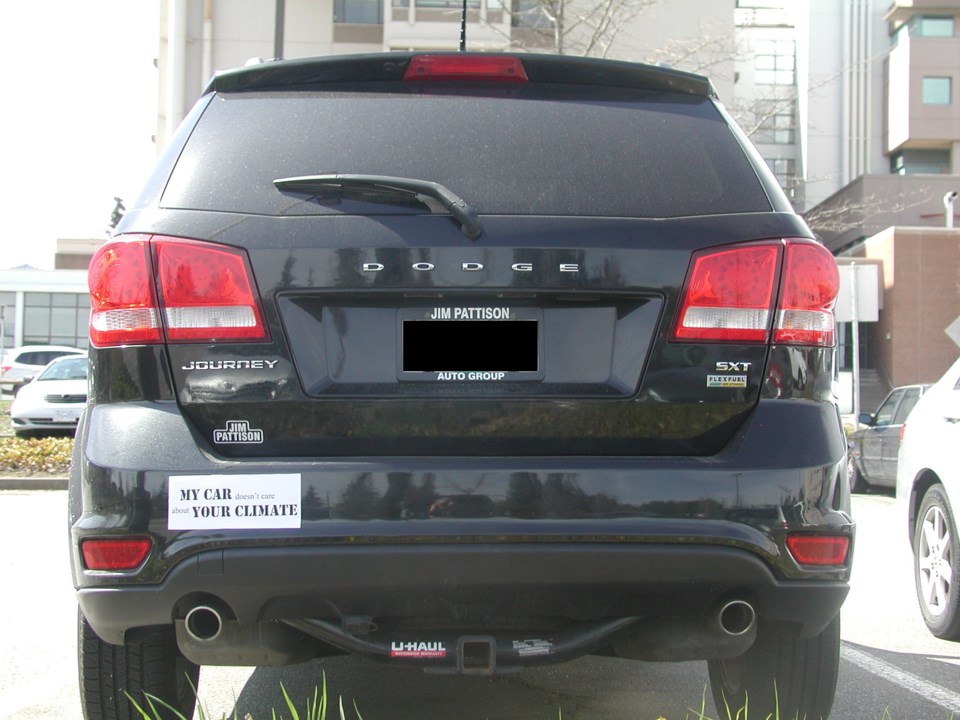 This is one of the vehicles targeted by climate change "agitators" CO2oalition. After putting the "My car doesn't care about your climate" bumper sticker on the car, the group posts the photo online. The Courier has chosen to cover the licence plate number.

An anonymous group of climate change activists is none too pleased with truck and SUV owners and they’re making a very visual and public point of voicing that disdain.

Known as CO2alitionBC, the group goes around Metro Vancouver tagging large private vehicles with bumper stickers that read “My car doesn’t care about your climate.”

The coalition’s online presence dates back to November 2017, and the Courier has requested several interviews with a group spokesperson since that time. None have gone on the record, as group members don’t want their names published. A coalition spokesperson instead responded to questions via email, suggesting members are apprehensive to be identified due to safety and career concerns.

“The project is intended to be provocative, but I think we underestimated how provocative it would be. One of our members had a pretty negative interaction with an angry SUV owner. Others are worried about implication to jobs and reputation,” the spokesperson said.

Subsequent questions around the group’s mandate and members were not returned before Courier deadlines.

The spokesperson said the group operates in a “legal grey area,” though that’s not the case in Vancouver. Tagging signs, for example, violates two city bylaws around graffiti and traffic control. The graffiti bylaw carries a maximum fine of $500.

City spokesperson Jag Sandhu said about 2,800 pieces of graffiti are removed around Vancouver each month, of which 415 are stickers.

“The city is committed to removing graffiti quickly from public property and offer free paint to businesses and residents who are victims of graffiti vandalism,” he said in an email.

Sandhu added that no complaints specific to CO2alitionBC have been fielded by the city’s 3-1-1 information line. Ditto for the Vancouver Police Department.

“Although there are several options available to the police during their day to day duties, anyone caught purposely damaging someone else’s property could face mischief charges,” VPD Const. Jason Doucette told the Courier in an email. “We are not suggesting that people should not be able to voice their opinions, we just want to make sure that no one gets hurt and property doesn’t get damaged.”