Could e-scooters be hitting Metro Vancouver streets this summer? 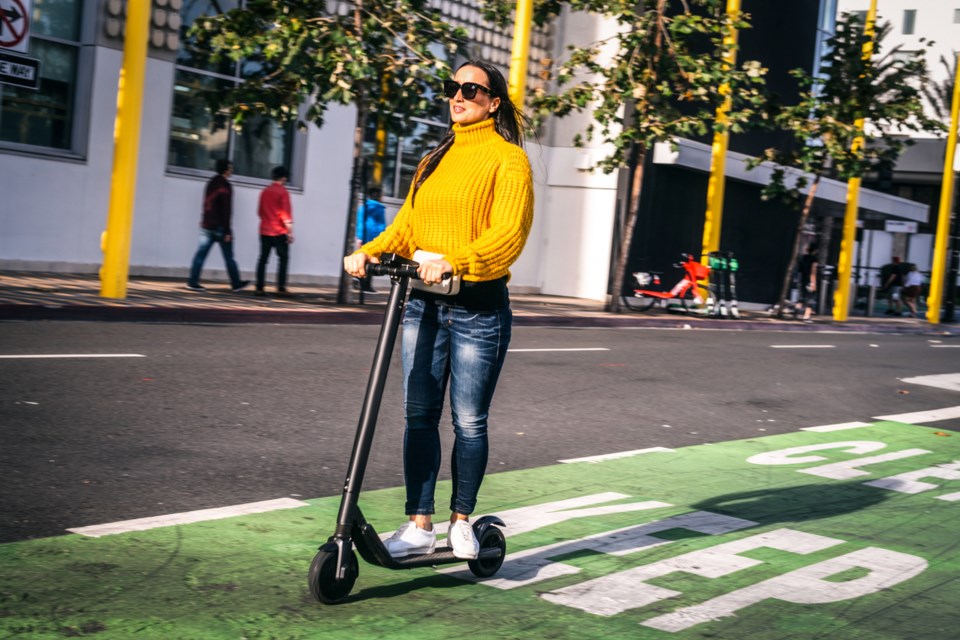 Although e-scooters remain banned by B.C.’s Motor Vehicle Act, the province will permit the launch later this year of pilot projects featuring e-scooters and similar devices in a bid to reduce traffic and address the ongoing first-mile/last-mile challenge for commuters. Photo iStock

A sidewalk stroll through San Francisco nowadays can feel like a basic-training obstacle course, what with having to navigate around knocked-over e-scooters or spring away from oncoming e-skateboards.

But while such “micromobility” devices have quickly become a mainstay in many cities across the globe, they remain banned by B.C.’s Motor Vehicle Act.

The province, however, will permit the launch later this year of pilot projects featuring e-scooters and similar devices in a bid to reduce traffic and address the ongoing first-mile/last-mile challenge for commuters.

Pilot proposals from interested communities and organizations will be accepted until March 6, while the B.C. government plans on handing out approvals by the summer at the earliest.

It’s a timeline Movmi Shared Transportation Services Inc. CEO Sandra Phillips calls “ambitious,” but she said the government’s plan to work with communities first instead of issuing blanket regulations is the correct approach.

“I’ve launched many, many, many shared-mobility projects and there’s always something that doesn’t go to plan,” she said.

B.C. has already made some forays into this space, with the City of Kelowna welcoming a limited launch of e-scooters in July 2019.

But because the Motor Vehicle Act bans the devices, the e-scooters are allowed only in select stretches of the city.

Phillips said an informal poll she conducted earlier this month at a conference found that industry is most interested in launching in Kelowna, Victoria and North Vancouver.

“They’re further ahead, they’ve done a lot of the legwork, they’ve openly said, ‘We will work on a pilot, however that looks like,’” she said.

There have been other industry pushes prior to this, with representatives from e-scooter company Lime (Neutron Holdings Inc.) meeting with officials from the Ministry of Transportation and Infrastructure during the summer of 2019 to request changes to the Motor Vehicle Act.

The company began hiring for positions in Vancouver in November 2018, but no services have launched yet because of the ongoing ban.

The City of Calgary is the midst of its own e-bike and e-scooter pilot project (e-bikes are not banned from B.C. roads).

“While the pilot has been popular, there have also been concerns and complaints predominantly surrounding where the devices are ridden, how they are parked, the behaviour of some riders and injuries involving the devices,” the report stated.

Phillips said the trick for B.C. will be to find the right balance between being too restrictive — an approach that could dissuade ridership — and being so permissive that the devices become a nuisance. An April 2019 report on micromobility from the National League of Cities (NLC) found that 48 per cent of San Francisco residents already have a negative view of e-scooters.

“Many criticisms from residents included the right-of-way crowding, dangerous drivers and blocked sidewalks from operating or discarded scooters. There were also anti-scooter vigilantes who broke scooters in half, placed them in trash cans, painted them and even tossed them into bodies of water,” the NLC report said.

“Many cities are considering ways to regulate scooters. Washington, D.C., ran a pilot project, which allowed six different companies to run 400 vehicles each. After the District’s first scooter fatality occurred tragically in September [2018], the city passed regulations that not only require companies to go through an application process, but also set limits on the number of scooters allowed per provider and the speed at which scooters are allowed to travel.”

Engineer Matthew Klippenstein, an electric-vehicle expert and clean-energy consultant with Electron Communications, said e-bikes might prove to be a more resilient micromobility option for now.

“E-bikes do have the advantage that they are covered as bicycles [under the Motor Vehicle Act],” he said.

“I’m hopeful that we can strip away unnecessary red tape that is in place [for e-scooters] only because no one foresaw this development of micromobility.”

E-bikes have been popular under the B.C. Scrap-It program, which offers incentives to drivers who decide to recycle their older cars.

The program offers discounts of up to $850 on e-bikes.

“Out of all the non-cash vehicle incentives we offer, 40 per cent of our customers are choosing the electric bike option,” Scrap-It chief operations officer Diane Roberts said in an email.

“Hopefully the cities don’t just give permits to large global players who have very little stake in the local community,” she said.