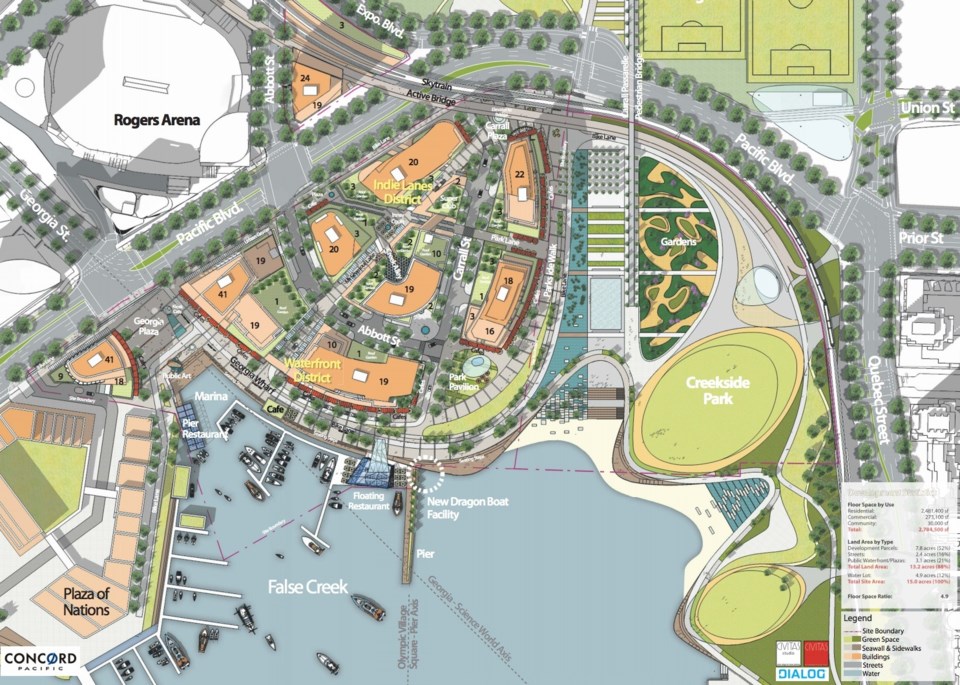 City council approved Tuesday a plan to transform the 58 hectares that comprises the Northeast False Creek lands, which will require the demolition of the Georgia and Dunsmuir viaducts.Rendering courtesy Concord Pacific / DIALOG

City council has given the green light to a 20-year ambitious plan to transform 58 hectares of land in Northeast False Creek — once home to lumber mills, a ship-building industry and Expo 86 — into the equivalent of a town the size of Prince Rupert.

The plan, which council approved Tuesday after more than four hours of debate, requires the demolition of the Georgia and Dunsmuir viaducts and construction of a new road network through what will be a maze of new highrises and other forms of housing for up to 12,000 people.

“This is a very bold plan that really revitalizes what is one of the last waterfront neighbourhoods here in Vancouver,” said Mayor Gregor Robertson, noting the addition of 8,000 new homes, with at least 1,800 devoted to social housing. “It’s an amazing opportunity to build a fantastic new neighbourhood around the stadiums and through where the viaducts are now.”

The plan allows for a community centre and ice rink on the former Plaza of Nations site, 32 acres of new and redeveloped parks, at least three childcare facilities and a massive waterfront plaza and wharf lined with restaurants and pubs.

The construction of a cultural centre on Main Street to honour the black community of Hogan’s Alley and a $30-million upgrade to the Chinese Cultural Centre of Greater Vancouver on Pender Street are incorporated in the plan.

Both of those projects aim to help reconcile the injustice to both communities whose residences and businesses were razed in the late 1960s to construct the viaducts. An Indigenous peoples’ gathering place is also proposed, as well as having First Nations’ input in planning parks and renaming the Northeast False Creek planning area with an Indigenous name.

Council voted on 14 separate recommendations and amendments to approve the plan, with NPA councillors Melissa De Genova, Hector Bremner and George Affleck arguing unsuccessfully to defer a vote until more consultation was done with the public.

Affleck also raised concerns about the cost of what city staff has said will be a self-funded project that will generate $1.7 billion in amenities, including an estimate of $620 million in affordable housing, some of it planned for two city blocks that straddle Main Street.

“This isn’t the role of the City of Vancouver — to be building so much housing,” Affleck said, noting the city should be forging partnerships with senior governments before drafting such an ambitious plan that he worries could leave the city in debt.

City staff emphasized an implementation plan, along with a financial strategy, still have to go before city council for approval. Rezoning applications for the various properties at Northeast False Creek also have to be heard by council.

Development fees, land transactions and money from senior governments are expected to pay for the project, which allows for the construction of three tall towers where Georgia Street will descend on a new sloping road to Pacific Boulevard.

Kevin McNaney, project director for Northeast False Creek, told council at a Jan. 31 meeting the towers will add some variation to the skyline. McNaney noted an urban design panel comprised of international experts recommended the taller buildings, which will be 10 to 12 storeys higher than normally allowed.

“It also creates a celebratory moment in the skyline, where we can celebrate one of our biggest entertainment districts in the province of British Columbia,” he said, referring to Rogers Arena, B.C. Place Stadium, Parq casino and the proposed Georgia Wharf.

Green Party Coun. Adriane Carr voted against the city amending its higher buildings policy, saying the three buildings will impede views of the North Shore mountains. Carr also had concerns the type of housing to be built at Northeast False Creek will largely be more expensive condos.

“I’m not confident we will get affordability to the degree which we need it,” she said. “I feel 80 per cent are going to be high-end condos, and we do not need more high-end condos in this city.”

Northeast False Creek is a complex pattern of lands that are owned by the provincial government and its Crown corporation (PavCo), various private landowners (Concord Pacific and Canadian Metropolitan Properties), the City of Vancouver and countless property owners and renters in existing buildings.

Vanessa Richards, a member of the Hogan's Alley working group, said she was optimistic about the plan's goal to recognize the historic injustice that occurred when Hogan's Alley was wiped out to make way for the construction of the viaducts.

"I feel really happy that there's an opportunity to realign our history and our presence, and I think it's a very courageous plan on the part of the staff and the city taking it on," said Richards, who noted the importance of citizens to be involved in the creation of a new section of the downtown. "It's a new way of people power influencing how cities work for people."

Fred Mah, president of the Chinatown Society Heritage Buildings Association, said he is "a little bit happier" with the direction of the plan after council approved amendments that include upgrading the Chinatown Culture Centre of Greater Vancouver and connecting roads and a proposed promenade on Carrall Street to Chinatown.

"We created the dragon boat festival and we want to be able to have better access to that," said Mah of the festival rooted in False Creek adjacent to Science World.