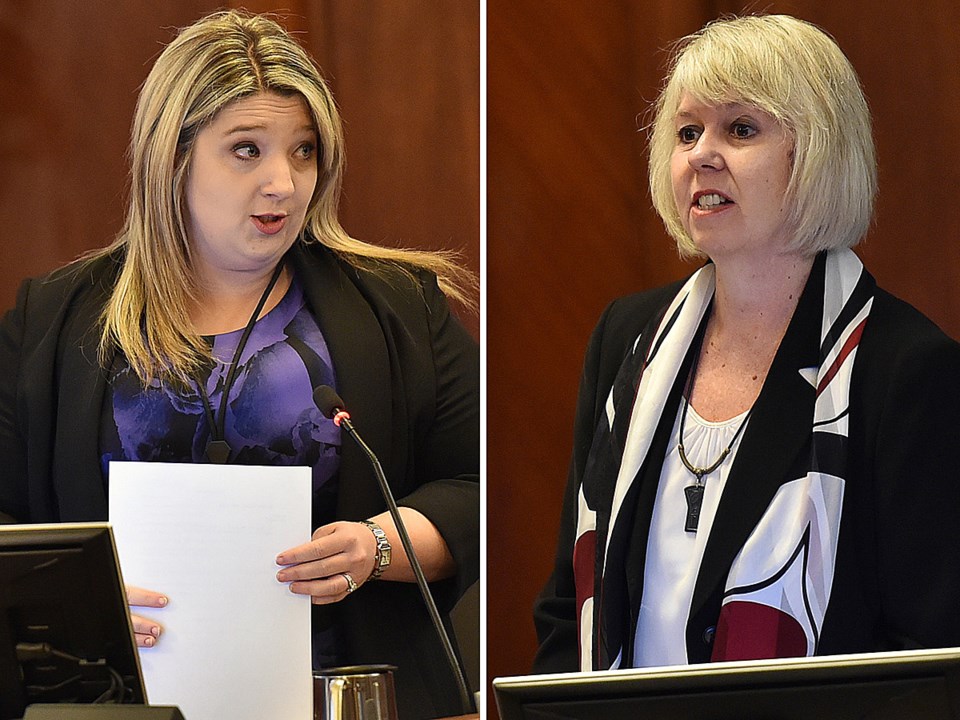 Councillors Melissa De Genova and Adriane Carr say they know of four incidents between them of people bringing suitcases and reusable shopping bags filled with money into city hall to pay for taxes. Photo Dan Toulgoet

Citizens are bringing money in suitcases and in reusable shopping bags into city hall to pay taxes, according to accounts from two city councillors, including one who says she saw this happen “a few times” last year.

The accounts from NPA Coun. Melissa De Genova and Green Party Coun. Adriane Carr surfaced in debate Tuesday before council unanimously approved a lengthy motion from De Genova to have city staff work with police and government to prevent and deter money laundering in local businesses and in transactions at city hall.

“I first-hand have seen this,” De Genova said in the council chamber. “We may have stories of this second-hand, but I’ve seen this a few times now and this does concern me.”

Added De Genova: “I’m not saying that all cash that comes in to the City of Vancouver is laundered, is the proceeds of crime. However, I think we can definitely deter and prevent that, or limit that by at least having some types of checks and balances.”

Added Carr: “So when you get reports like that…we should be checking into this.”

The Courier interviewed both councillors Wednesday about the incidents.

Last July, De Genova said, she saw a man in the main lobby of city hall carrying a black bag with money in it. The man asked her where he could pay “taxes.”

“[The money] was stacked in the bag, and it was very obvious—I could see into the bag,” she said. “I don’t know that they even knew I was a city councillor.”

A few months previous, she said, she saw another man in the same location with a bag of cash.

“They had a reusable bag—one of those ones you’d see in a grocery store—and it was just filled with cash,” De Genova said. “They weren’t trying to hide it all. I was just quite amazed to see that myself.”

It wasn’t clear to De Genova at the time whether both men were in the lobby to pay property taxes, the empty homes tax or make some other transaction related to a business licence or city fee.

Under the empty homes tax, the city collects one per cent of a property’s assessed taxable value, if the property is left vacant. The city estimated it will receive $38 million in revenue for the first year of the tax.

Carr said she received reports over the last few months from two citizens on two occasions about people bringing suitcases into city hall to pay for property taxes. When asked how the citizens knew the suitcases contained cash and that the money was being used to pay property taxes, Carr said:

“These are anecdotal reports—this is not a formal thing that somebody said to me in writing, but they absolutely said they’ve personally seen people bring a suitcase of money into city hall and pull out cash to pay for property tax. That’s what was conveyed to me.”

Melanie Kerr, the city’s director of financial services, said in an email “there has definitely not been anyone bringing money to city hall in a suitcase.” The Courier followed up to ask about shopping bags but had not received a reply before this story was posted.

Despite some Metro Vancouver municipalities not accepting cash payments at their city halls, Vancouver still allows the transactions. Municipalities are not required to report any suspicious activity to the Financial Transactions and Reports Analysis Centre, which is Canada’s financial intelligence unit. FINTRAC’s mandate is to detect, prevent and deter money laundering and the financing of terrorist activities.

Last year, the city’s revenue department collected more than $2 billion for services such as parking permits, bylaw fines, business licences, municipal taxes and taxes collected on behalf of other authorities. Of the $2 billion, approximately $13 million was made in cash payments.

“For a number of years, we have been encouraging residents to use more streamlined methods of payment including payment online or at a bank, and going forward we are exploring reducing or eliminating cash as a payment method as a way of managing risk and increasing efficiency,” Kerr said.

Sgt. Jason Robillard, a Vancouver police media relations officer, said in an email “there were no reports of suspicious payments at city hall over the last five years, including reports of anyone attempting to pay in cash from a suitcase.”

De Genova acknowledged bills for property taxes wouldn’t necessarily require a property owner to bring in money in a grocery bag or suitcase, but said payments for the empty homes tax and a $30,000 annual licence for a marijuana dispensary can get expensive.

“In light of the empty homes tax being fairly new and these $30,000 cannabis retail licences—it’s a bit different than people paying twice a year at city hall in cash for their property tax,” she said, noting staff have told her some dispensary owners don’t have bank accounts and pay in cash.

Over the past few years, various media stories and reports from police and governments have tied real estate, casino gamblers and the drug trade to money laundering. The B.C. government-commissioned “Dirty Money” report suggested more than $100 million had been laundered in the province. Recent police reports have estimated the total dollar amount as closer to $1 billion in Canada.

De Genova’s motion requests city staff to take on a number of tasks to prevent and deter money laundering, including: