Cover: Dale Mackay and his son Ayden are the perfect ensemble

Father: How was your day? Son: Okay. Father, slightly exasperated: What did you do at school? Son, feigning boredom: Nothing. Father, making one more try at conversation: What do you want for dinner? Son, hoping his dad gives up: I dont know.
Jun 12, 2012 9:00 PM By: Vancouver Courier Staff 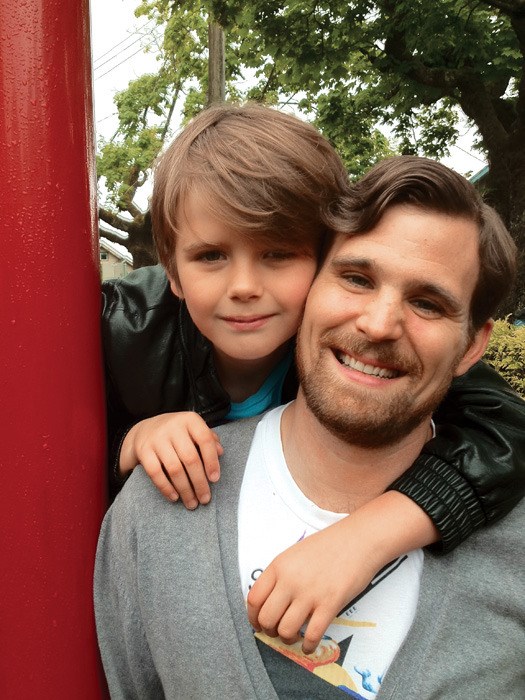 Father: How was your day?

Father, slightly exasperated: What did you do at school?

Father, making one more try at conversation: What do you want for dinner?

Son, hoping his dad gives up: I dont know.

This is not repeat, not the conversation that Dale and Ayden Mackay are having as father and son walk along the tree-lined street that leads from General Gordon Elementary School to their home in Kitsilano. Its a Thursday afternoon and, as is his custom, Dale has taken a pause from running his two restaurants Ensemble and eTap for a fatherhood hiatus.

One question from Dale unleashes a torrent of little stories and observations from his 10-year-old son. The two converse with a comfortable companionship thats so strong its palpable. Sometimes Ayden looks up at his father to share something particularly funny. Sometimes Dale reaches out to touch Ayden on the shoulder or to brush aside Aydens long bangs. Sometimes they hold hands as Ayden chatters away about friends, comic books and, of course, food.

Ask Ayden what he wants to be when he grows up and he instantly says chef. He knows how hard being a chef is because hes watched his dad put in many long hours to get to where he is. Ayden isnt fooled by all the fun parts such as becoming last seasons winner of Top Chef Canada and the attention that came with it. Sure, he likes watching his dad on TV (or joining him as guest judge this season), but in order to get the cameras focused on you, you first have to put in many years in a hot kitchen.

Still, Ayden dreams of owning his own restaurant, even though his father has already told him that apprenticeship starts by doing the dishes.

A self-confessed picky eater who is now branching out to more adventurous foods such as butter chicken, hes not sure what will be on the menu of his restaurant. But he knows what hed like to call it. Ayden looks up at his dad and says, Ensemble Junior.

That would be awesome, Ayden adds, his eyes shimmering as if he can see the sign above the restaurant now.

Dale Mackay always dreamed of being a father. Its the ultimate goal to share, he says, and being raised in a loving family in Saskatchewan, it seems natural to him to want to create the same opportunities for his family. Right now theres only Ayden but he hopes one day there will be more kids. Ayden seems interested in the idea too. At present hes taking advantage of being an only child, spending weekdays with his dad and weekends with his mother Melanie. His favourite thing to do with his dad is movie night. Its on Mondays, the only day of the week his dad gets off. They order pizza Ayden always gets pepperoni and green pepper and Dale chomps down on pineapple and ham and then watch movies in their underwear. (Its a guys thing, Ayden says. Were definitely boys, for sure.)

For us, Dale adds, its to make sure that when we have time together its quality time.

Essentially, when Dales not with Ayden, hes at work and when work takes him away from Vancouver, he takes Ayden with him whenever possible. Sharing his dad with so many people means that Ayden has had to make sacrifices, but its also meant trips to Toronto to be on the Food Network set, or flying to Kelowna to watch his dad judge an Iron Chef competition.

Ayden accepts the bad with the good. I know he has to do his job and thats what got him to where he is today, Top Chef Canada, and Im proud of that, Ayden says.

And yet for all that Ayden and Dale are obviously such good friends, Dale is very much aware of his role as father. You have to be buddies but my job is to raise him properly. Im pretty hard on him but hes very even keeled and mature.

Dales parenting role model is his mother. There was absolute love but there was also a demand for mutual respect. Dale strives for the same as a father and is completely open with Ayden. Do they ever fight? Only about what movie to watch, Ayden says.

As Fathers Day approaches, Aydens asked what words hed use to describe how he feels about his father. For the first time in this interview, hes tongue-tied. He turns to his dad to help him with the answer. I love you, Ayden says, and I dont know how to put it in little words to explain it.

Dale nods his head and says he knows, and not just because they tell each other I love you every day. Its that love he cherishes above all else, and gives him the most satisfaction. It makes all the other stresses okay and puts all the other joys in perspective. He couldnt live without it.

Knowing theres someone who loves you, Dale says is a pretty big thing.