Its easy to miss the memorial at the intersection of East Eighth Avenue and Quebec Street. In passing, the lone bicycle looks like someones long abandoned ride, the missing tires perhaps stripped by opportunistic thieves.
Aug 23, 2011 9:00 PM By: Vancouver Courier Staff 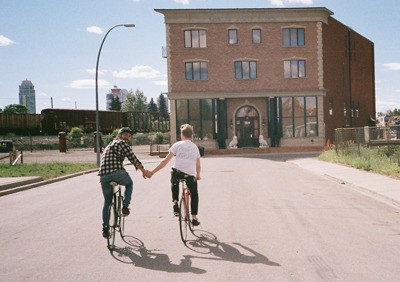 Its easy to miss the memorial at the intersection of East Eighth Avenue and Quebec Street.

But look closely at the stark, white road bike and youll notice that a nameplate welded to the frame bears the name Winnick. Linger a little longer and youll see the stencils on each of the intersections four corners: Wear Your Bike Helmet and You Are Loved And Missed Dan.

Its easy to zip past roadside memorials, the crosses, wilted bouquets, grimy teddy bears and ghost bikes that dot our roadways, without giving them a second thought. Easy to dismiss the accidents as a byproduct of living in an urban environment; inevitable occurrences so common they get only two or three lines in the newspaper if that.

But for every fatality that flits in and out of public consciousness, theres the story of a life cut short, often by an arbitrary confluence of factors that, given a split-seconds difference, would not have conspired to end a life.

In the case of 25-year-old Dan Winnick, its easier still to shrug off the accident as the case of a dumb kid who did a dumb thing. But Dan Winnick was anything but a dumb kid. He was a beloved son and brother, the epicentre of his group of dozens of close Vancouver friends, with scores more friends back home in Calgary.

When he collided with the car at nine minutes to midnight on July 21, 2010, he made a tragic error in judgement. One bolstered by a sense of invincibility common to many in their 20s. And though accidents like Dans are rare (police say he was the only cyclist fatality in Vancouver in the last few years), his death a month later was far from an isolated incident. A year after the accident, those who knew him are still struggling to make sense of the world in his absence.

Dan's moustache and glasses (left) were part of his signature look.

Penny and Jim Winnick always got a kick out of how their sons, Dan and Nick, were like night and day. The boys loved each other but approached the world from opposite ends. Nick, three years Dans senior, was the cautious observer; hed want to stay inside and watch the snow fall, says Penny. Hed walk around the puddles on the street.

Dan liked to get his hands dirty hed charge through the puddles, roll around in the snow. Hed want all the toppings on his ice cream sundae.

But when it came to his relationships Dan was caring, empathetic and sensitive, qualities his friends say made you feel like youd known him forever at the first meeting. He had a preternatural wisdom Penny often marvelled at; she loved being in the room when her youngest was formulating ideas hed carefully consider all sides of an issue. When Dan was really thinking it was like you were listening to his soul speak, she says.

Dan studied journalism for a year and wrote about music for Beatroute magazine but wasnt ready to settle into a career. He moved to Vancouver in 2008 to take a carpentry course.

This citys reputation for cold social reception was no match for his natural warmth and charisma. Almost instantly, Dan wormed his way to the centre of a tight-knit group of East Van denizens, mostly creative types into tattoos, garage rock, beer-league softball and long bike rides through town.

He became best friends with Matt Hagarty, a fellow Calgarian whose rundown rental on East 10th avenue was the groups unofficial clubhouse. They called it The Kingdom. Dan lived across the street.

Known for his aviator sunglasses, blonde moustache and extensive collection of flashy footwear, Dan had a signature style reminiscent of a trendy high school guidance counsellor. It fit his personality. People sought him out with their problems and confessions because he always seemed to have something helpful to say. A month before the accident, Dan got his first real tattoo. It was a sheriffs badge, a riff on the movie The Good, The Bad and The Ugly he shared with two other friends. Each bore the part of the title that related to him. Dan, naturally, was The Good.

At the encouragement of friends, Dan had planned to take some counselling courses last fall. But for the summer he was taking it easy, working as a cabinet-maker spending every spare moment with Matt and another friend, Aaron Weiss. On a typical day, the trio would ride out to Third Beach or Jericho, maybe check out some music at the Media Club or the Anza. Dan was on his way there when the accident occurred.

Friends have set up a memorial at Quebec and Eighth.

The intersection at Quebec and Eighth can be a tricky one. Close to the bike routes on Ontario Street and 10th Avenue, cyclists often use Eighth as a secondary route. Theres a stop sign there, but the parked cars on Quebec can obscure the view for even rule-abiding cyclists. A lot, though, just whiz right through.

Its hard to say how many times Dan Winnick had sailed through that intersection without incident. Harder still to know exactly what happened in the moments before he hit the white Oldsmobile heading up Quebec towards Broadway. He might have been racing, which he often did on his road bike. He might have been looking back over his shoulder to check on his friends.

He was definitely going fast, definitely blew the stop sign and definitely t-boned the car with considerable force, flying over the his handlebars and into the cars rear driver-side doors. He wasnt wearing a helmet, he almost never did.

According to the police report, Dan sustained devastating and catastrophic injuries to his head, skull and back. Those same adjectives apply to the ripple effect the accident had on virtually everyone who knew him.

No phone call in the middle of the night is a good one. Penny and Jim knew something was wrong as soon as the phone rang at 1:30 a.m., Alberta time. Dans number showed up on the call display but it was Aaron on the phone. Thered been a bike accident. Dan was hurt. They should get in touch with Vancouver General Hospital.

When you hear about a bike accident you think hes just fallen off and bumped his head, says Penny. She quickly realized that wasnt the case. An ICU nurse, Penny started fearing the worst when she phoned the hospital and no one but the doctor could give her an update always a bad sign.

Come and come soon she was told after an agonizing wait. After that, everything was like a bad dream. As if on autopilot, the couple put some clothes in a suitcase, made arrangements for the dog and got on flights as soon as humanly possible.

That was the first time I cried, says Penny. Up until then I was in a daze but when I sat down on the plane to Vancouver I started crying. I dont think I stopped for months.

More than a dozen of Dans friends were already in the waiting room at the hospital, even though only family are supposed to be able to visit the ICU.

Penny caught sight of her son by accident. Hed undergone an emergency procedure and was being transported down the hallway. His head was bandaged, face swollen, body obscured by a mess of hoses and tubes. Both the moustache and the omnipresent smile it had framed were gone.

As medical professionals Penny and Jim, a retired respiratory therapist, had perhaps too much insight into what was going on in Dans body. They understood how deeply unconscious he was, how fast hed been going, how unlikely it was that he would ever wake up.

Back at The Kingdom stunned friends gathered, not sure what to do or say.

Matt had been out of town and arrived in Vancouver the day after the accident to find 40 people at his house and a lot of positivity covering up total despair.

During the weeks that followed, the group rallied. They took a photo as a Get Well card and held a benefit concert at the Media Club to raise money for Penny and Jim.

Most of them, Matt says, genuinely thought Dan would wake up one day and just go back to being Dan. They just couldnt conceive of that not happening.

But Matt had this sinking feeling. So did the Winnicks.

As the weeks went by Dans cuts and bruises healed. He opened his eyes but the messages were never conveyed to his brain. Matt would talk to him about video games or records or just sit silently and will him to get better. Penny read to him. She chose To Kill a Mockingbird, the book shed read her boys on a long cross-Canada road trip many years earlier. Theyd play music. Do anything to try and get a response. But there wasnt any capacity to respond left, says Jim.

Dans body finally gave out after a bout with pneumonia on Aug. 29, 2010. There were funerals in Vancouver and Calgary, where more than 200 people attended.

Theres no use getting caught up in the what-ifs, says Jim. You can really drive yourself around the bend.

What if the car had got caught at a red light? What if Dan had cleared the intersection two seconds earlier? What if hed been wearing the helmet they found in his apartment as they cleaned it out?

Jim and Penny try not to dwell on the hypotheticals, but that last one irks them. Theyd been here in April with Dan and rode bikes, Penny asked him about his helmet and now she wishes shed nagged him more.

Theres no question the accident was Dans fault, a needling fact thats difficult for his loved ones to reconcile themselves with. But the doctors suggested there might have been a chance of meaningful recovery if hed been wearing a helmet.

Some of Dans friends, Lindsay Shedden, PJ Lavergne, and his cousin, Shane Rempel, started a non-profit helmet society in Calgary. This past summer they partnered with Calgarys Sled Island Music Festival a favourite event of Dans to give away helmets by donation. They ran out both nights.

Getting more young people to protect their heads is about all his friends could fathom to make the situation better. The Winnicks are heartened by the effort but still the first anniversary of Dans death looms heavily. Because its just the first of many, a forever without him.

Despite the short time he lived in Vancouver Dans absence has altered this city too. The Kingdom quite literally fell apart. After Dan died, the party was over in many ways, says Matt. Its much easier for friends to stick together in the face of hope than grief.

Each of the 20-somethings has struggled to find a way to deal with the harsh wake-up call. I either dont think about it at all, or it consumes me, says Matt, admitting he drinks a lot these days.

But sometimes, when he needs an outlet and doesnt know what else to do hell pay tribute the only way he can think of. If you look around Main and Broadway, just a block or two away from where the ghost bike sits, you might still catch a glimpse of a faded sheriffs badge, another reminder of the young man on the bike and the thing theres now a little less of in the world. The Good.

Join the helmet debate here with an exclusive head-to-head meeting between helmet activist Lindsay Shedden and the man who is challenging B.C.'s helmet laws in court, Ron van der Eerden.