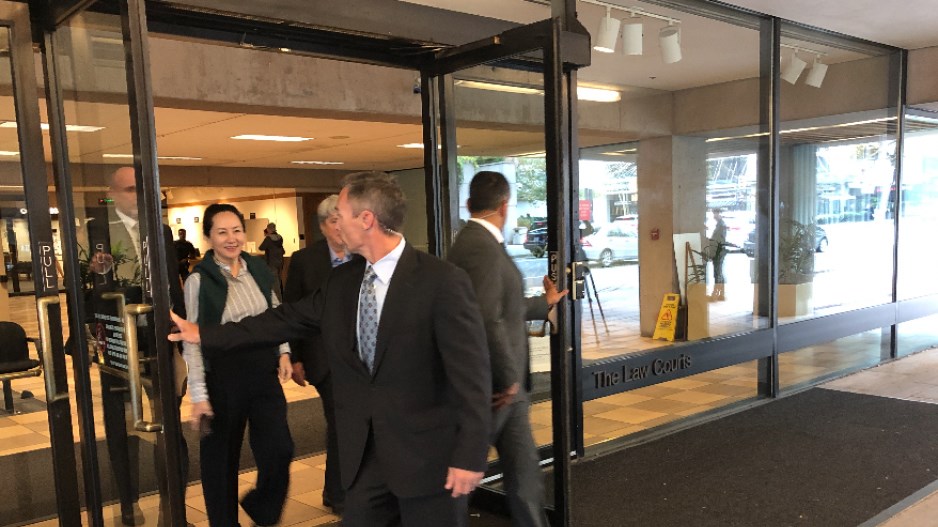 The two sides in the extradition hearing case facing Huawei Technologies Co. Ltd. CFO Meng Wanzhou are expecting to battle over the issue of privilege — or one party’s right to refuse disclosure of certain information — after the debate on double criminality that is slated to start Monday.

In a case management hearing Friday morning in Vancouver, B.C. Supreme Court Associate Chief Justice Heather Holmes agreed to requests made by Crown prosecutors and Meng’s defence team to devote the case’s April 27 to 30 court dates to adjudicating privilege on the information disclosure, which prosecutors will aim to provide by a Feb. 28 deadline.

The dates had been previously set for reviewing the evidence that will be presented to court. Meanwhile, the hearings on double criminality, or whether Meng’s alleged crimes are arrestable offences in Canada as they are the United States, which requested the extradition, will begin Monday and possibly last to Jan. 24. Meng’s lawyers, however, say they anticipate finishing the argument one day earlier, by Jan. 23.

In addition, court dates set for later in the year — including the two weeks set in June currently planned to discuss the topic of abuse of process — may also see a possible change in the topics discussed.

“It is important, in the parties’ view, that the current court dates are set; … court time is precious and is given to the parties as targets to work towards,” said Crown prosecutor John Gibb-Carsley of its proposal to shift the topics discussed at upcoming dates. “However, what occurs at those court dates will change, and that will be addressed at a future case-management conference.”

Both the Crown and the defence said it is unclear how long the adjudication process for privilege will take, and whether it would extend into court dates after April slated for other discussions, since the defence has not seen what will be provided to them by the RCMP and Canadian Border Services Agency (CBSA).

In addition, Meng lawyer Richard Peck filed this week a response of the Crown's assertion that double criminality applies in the case. Peck argues that the Crown's contention — that the U.S. sanctions against Iran that Meng and Huawei allegedly violated are part of a "foreign legal environment that gives context" to the alleged core misconduct of fraud — is "deeply concerning" because it is "importing into Canada the very same U.S. sanctions laws that Canada repudiated as an expression of its independent foreign policy."

Thus, Peck said that the U.S.'s request to extradite Meng is "based on imported U.S. criminal laws that not only do not exist in Canada, but which Canada has eschewed."

Meng’s defence team wrapped up hearings in late 2019 by requesting additional information from the RCMP and the CBSA to disclose the discussions the authorities may have had before Meng’s arrival in Vancouver on Dec. 1, 2018. Defence lawyers contend the plan to arrest Meng immediately on her arrival was changed to one where the Huawei executive was held for three hours by the CBSA, allowing evidence to be collected prior to her official arrest.

Crown prosecutors rebutted those claims, saying the three-hour detention is a routine border security check to determine Meng’s admissibility to Canada. Back in December, Holmes ruled that Meng's team "has met the test for disclosure of further documents to support her allegation of abuse of process," but added that "this conclusion does not predict or imply that her allegations will ultimately succeed."

The December court order further noted that privileged documents are not required to be disclosed according to the order, and that the Crown must clearly state which disclosures are deemed by prosecutors as privileged so that Meng's defence can "apply for a determination of that claim."