Derrick Pouliot is a riddle, wrapped in a mystery, inside an enigma 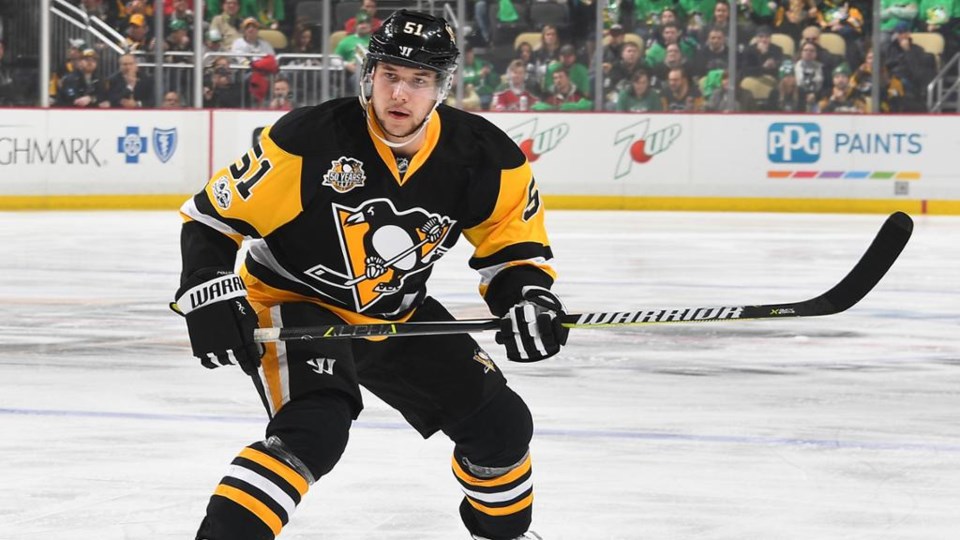 As recently as two years ago, Derrick Pouliot was considered to be one of the best defenceman prospects in hockey. Mike Gillis reportedly targeted Pouliot in a potential Ryan Kesler trade, but the Penguins weren’t willing to give up their blue-chip defenceman. Again, in 2015 when the Leafs were shopping Phil Kessel, they were rumoured to be after Pouliot, but the Penguins had no interest in moving a player they saw as a cornerstone of their future.

On Tuesday, the Penguins traded him to the Canucks for Andrey Pedan and a fourth-round pick.

“We’re betting on his talent and skill level,” said Jim Benning after the trade was announced. “We think it was a gamble worth taking.”

How does a young defenceman go from a potential centrepiece in a blockbuster trade to it being a “gamble” to acquire him with a low-end prospect and a middling pick? Pouliot was the heir-apparent to Kris Letang in Pittsburgh not too long ago and is now maybe above Alex Biega on the Canucks’ defensive depth chart. What happened?

The 2012 NHL Draft was the year of the defenceman, with eight defencemen selected in the first ten picks. The Pittsburgh Penguins were the hosts of the draft that year and had a top-10 pick thanks to the Jordan Staal trade with the Carolina Hurricanes. Clearly, they wanted to make a splash.

The Penguins picked Pouliot, immediately making him their top prospect on defence, if not in their entire system. Pouliot was the top-scoring WHL defenceman in his draft class and followed it up with two increasingly dominant offensive seasons in the WHL.

Pouliot was lauded for his skating ability, which is silky smooth, with fantastic edgework, balance, and agility. His puck-handling, passing, and keen offensive instincts. His defensive game and consistency were questioned, but no more than other young offensive defencemen.

As a 19-year-old, in his second season after being drafted, he put up 70 points in 58 regular season WHL games, then followed it up with a stunning 32 points in 21 playoff games. There was every reason to believe that he was developing into the top pairing offensive defenceman that the Penguins thought he would be when they drafted him.

Even in his first professional season in 2014-15 at the age of 20, everything looked positive. He put up 20 points in his first 23 AHL games, making it an easy decision to call him up to the NHL. In his very first NHL game, he scored the game-winning goal.

While Pouliot bounced between the NHL and AHL for the rest of the season, it was a solid rookie debut: 7 points in 34 NHL games to go with his 24 points in 31 AHL games. It’s no wonder the Penguins had no interest in trading him in 2014 or 2015.

Heading into the 2015-16 season, Pouliot was expected to make a case for playing in the Penguins’ top-four out of camp. Instead, he had a disastrous preseason, with head coach Mike Johnston saying, “He’s not a regular NHL player. He’s a guy who has played games.”

Accordingly, Pouliot was one of the last players cut. The Penguins carried eight defencemen on their opening-night roster and Pouliot was not one of them. Adam Clendening — remember him? — made the roster ahead of Pouliot.

It took until late January for Pouliot to finally get called up and into the Penguins lineup. He finished the season with 7 points in 22 NHL games.

Last season, Pouliot finally made the Penguins roster out of camp after a stronger preseason, but was a healthy scratch for all but one of the Penguins first 19 games. He played just 11 games with the Penguins during the 2016-17 season and recorded no points. The 27-year-old journeyman AHL Chad Ruhwedel played 34 games for the Penguins last season.

At this year’s training camp, Pouliot evidently got outplayed once again by Ruhwedel. Instead of losing Pouliot for nothing on waivers, where he almost certainly would have been claimed, the Penguins quietly inquired of the Canucks (and likely other teams) if they would be interested in a trade.

“My belief is you don’t really know what you have in a defenceman until they’re 24-25 years old,” says Benning in reference to the 23-year-old Pouliot. It’s part of the reason why he was comfortable taking a chance on a player Penguins fans were starting to label a bust.

It’s a common old-school hockey belief that defencemen take longer to develop than forwards, but it’s one that has been challenged by data-savvy hockey minds in more recent years. The data suggests that defencemen tend to peak from 22-25, then gradually recede until around the age of 30, then pretty much fall off a cliff.

Further work by Tyler Dellow (warning: paywall) suggested that if a defenceman can’t crack an NHL lineup by the age of 21 and quickly become a driver of puck possession, then he is very unlikely to become a high-end, top-four defenceman.

What does this mean for Pouliot? The fact that he played 46 games in the AHL at the age of 22 is a pretty bad sign, to start with. Very few defencemen that spend that much time in the AHL at that age become legitimate top-four defencemen. It turns out that for most defencemen, you can actually get a pretty good idea of “what you have” well before they’re 24 or 25 years old. In fact, by that point, they should be at their peak.

That said, there’s something interesting here: Dellow said that good, top-four defencemen break into the NHL by 21 and immediately start driving puck possession. There’s an argument to be made that Pouliot did exactly that.

Pouliot was 21 at the start of the 2015-16 season, though he turned 22 by the time he got called up to the Penguins. When he did finally play, he was dominant in puck possession. Not just good — dominant.

In his 22 NHL games, Pouliot led the Penguins in corsi percentage, with his team taking 58.51% of the shot attempts when he was on the ice at 5-on-5. That was while he was paired with two of the Penguins’ defencemen who had the lowest corsi percentage on the season, Ben Lovejoy and Ian Cole.

You can fine-tune that number if you like: he also led the Penguins in fenwick percentage, shots-on-goal percentage, and scoring chance percentage, all as calculated by Natural Stat Trick. That’s all at 5-on-5, where only Lovejoy started a lower percentage of shifts in the offensive zone, so it doesn’t appear that he was given easier minutes.

According to those analytics, Pouliot drove puck possession in 2015-16 better than any other Penguins’ defenceman, albeit in a small sample size of just 22 games.

So what happened last season? Why was he unable to crack the woefully thin Penguins’ blue line? Why has Pouliot been written off by the Penguins?

The biggest issue is his defensive game. Pouliot is prone to mental lapses in the defensive end: losing track of his check, failing to box out a forward on a rebound chance, or wandering from his assignment in front of the net. Those are the kinds of mistakes that coaches find unforgivable, no matter how much you give back at the offensive end.

That lack of focus and consistency cost him last season, as he got into just 11 games. And when he was in the lineup, his metrics suffered: he was better than just Ron Hainsey and Trevor Daley in corsi percentage among Penguins defence in 2016-17.

If you look closer at his 2016-17 data, he put up better results when paired with Olli Maata and Brian Dumoulin than he did with Justin Schultz, but the overall numbers are not encouraging.

So who is Derrick Pouliot?

“He’s a player that we’ve had our eye on for a while,” said Benning, “and when he became available, we were lucky enough to be able to figure something out to get him.”

While the data suggests that defencemen tend to peak at around 22, there are always outliers. The problem is when you use those outliers to inform your decisions on every other player. To whit, Benning referenced the Buffalo Sabres acquiring Dominik Hasek at the age of 27, to illustrate his belief that a goaltender isn’t fully developed until he’s 26 or 27 years old.

Hasek, however, is the very definition of an outlier. He was a goaltending genius, whose outlandish (yet intentional) acrobatics and tactics took time to develop and get accepted by old-school North American minds. Using arguably the greatest goaltender of all time to suggest that 27-year-old goaltenders Jacob Markstrom and Anders Nilsson haven’t fully developed yet just doesn’t make sense.

Could Pouliot be one of those outliers, who takes until the age of 23 or 24 to finally break though into the NHL and becomes a legitimate top-four defenceman? It’s possible, even if it’s improbably. For Benning, that possibility was worth Andrey Pedan and a fourth-round pick.

It’s that skill level that makes Pouliot so tantalizing, even if he’s been inconsistent in other areas of his game.

“You watch the Stanley Cup Playoffs last year,” he said, “and you see how mobile Anaheim’s defence was in the Calgary series or you see Nashville, how mobile their defence is. That’s the way the game’s going. It’s about speed, it’s about handling the puck, carrying the puck, moving the puck fast. Over time, the game is going to keep getting faster and faster. Getting Derrick, he fits into that new style of what defencemen are going to look like moving forward.”

It’s an overall shift from the Canucks’ previous approach to defence under the Benning regime. From last season to this season, the Canucks lost some serious size on the backend with Nikita Tryamkin heading back to the KHL and Luca Sbisa taken in the expansion draft by Las Vegas. Instead of looking to replace that size, Benning reportedly tried to trade Erik Gudbranson back to the Florida Panthers for the smaller, more skilled Jason Demers, a deal that reportedly got squashed by Demers’ no-trade clause.

And now he traded the 6’5” Pedan for the 6’0” Pouliot. It’s not that “meat and potatoes” are off the menu, but they might no longer be the staple of the Canucks’ diet.

“He’s a guy that we want to work with,” said Benning. “We want him to regain his confidence in the things that he’s really good at. We think the way he skates and the way he can carry the puck up ice and jump up in the play…we believe that his style of game is going to fit the way Travis wants to coach.”

That might be the most encouraging sign for fans: the Canucks want to play an up-tempo style of hockey and the Pouliot trade is a sign of that desire. That potentially means more excitement for the fans, more goals, and maybe, just maybe, more wins.

Does Pouliot have a long-term future with the Canucks? With just one year remaining on his contract, Pouliot will need to sign a new deal as a restricted free agent next summer. Consider this season his audition to be a part of the rebuilding process.