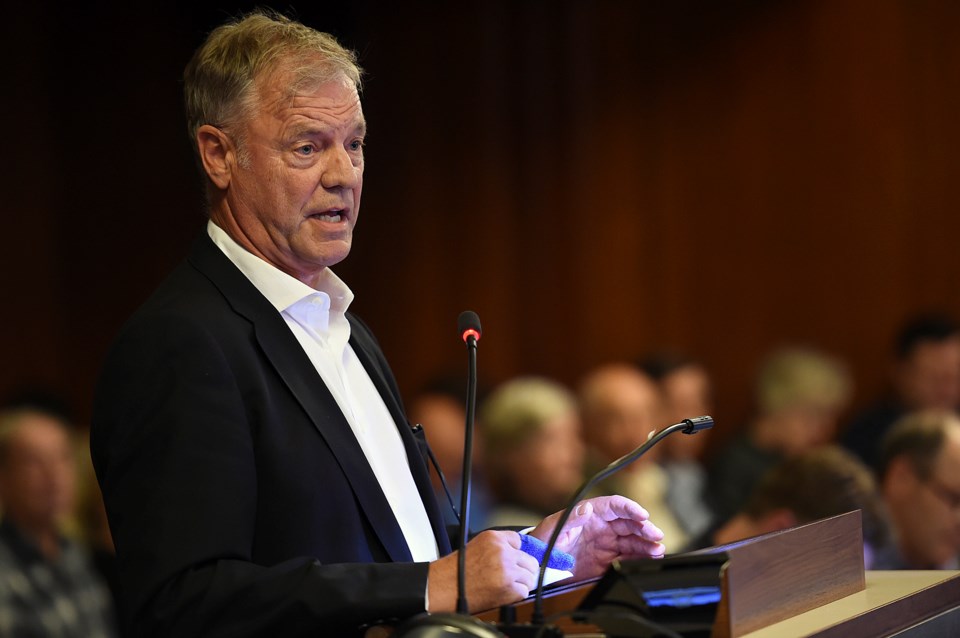 The vice-president of a development company that stands to gain financially from the proposed demolition of the Georgia and Dunsmuir viaducts says the new neighbourhood planned for the area will not be solely for wealthy buyers.

If city council approves demolition, Peter Webb said affordable housing will be “addressed” by Concord Pacific once negotiations begin with the city on what will be built on the swath of land between B.C. Place Stadium and Chinatown.

Concord owns several parcels of land adjacent to the viaducts and supports city staff’s recommendation to knock down the elevated roadways. Council is expected to decide Tuesday on the fate of the viaducts.

“We don’t see this as a highly exclusive neighbourhood that we just sell for a fortune and wander off,” Webb told Mayor Gregor Robertson at a council meeting held Wednesday to hear from speakers on staff’s recommendation to demolish the viaducts. “We understand the affordability of housing, the parks and community uses in the area, daycares, schools, seawalls, parks — all of those things are important parts of the development. And we recognize that in the rezoning process, we’ll have to address all of those topics together with the city in a sort of partnership way.”

“At this stage that we’re talking about, this is not a Concord master plan development, this is the city deciding what’s best for this end of False Creek,” Webb told the mayor. “What we’ve done is read your report and we actually support it. We think it’s very good planning.”

But what affordable housing looks like and whether it will actually be built on the lands — or created elsewhere as part of land swaps between Concord and the city — is still an open question. City staff’s report doesn’t provide a definition for affordable housing in this context, although it typically means rental housing or homes built for people on lower incomes. Subsidies are often involved.

In an interview following his presentation to council, Webb pointed out Concord owns five non-market housing sites outside the former Expo 86 lands that he said are waiting for senior levels of government to finance for construction.

“So to create new ones on this site might not make sense, but maybe it does,” he said. Since Concord purchased the lands in 1988, Webb said the company has committed to 20 per cent of its developments to affordable housing. “It’s one of the things that will be debated. There may be a way to convert that 20 per cent to funding to build the other ones. I’m not sure.”

When asked by Green Party Coun. Adriane Carr whether the demolition of the viaducts would increase the value of Concord’s property, Webb said it was “a fair statement.”

The city staff report says the net cost of knocking down the viaducts is $90 million to $127 million. Brian Jackson, the city’s chief planner, told council Tuesday that at least $300 million could be recouped via community amenity contributions, development cost levies and land sales.

When the Courier asked Webb how much of that $300 million will come from Concord, he said: “We haven’t had the money negotiations with the city, but I’m envisioning they’re imagining a lot of that is coming from us, and it may well.”

Another possible funding source to pay for the project is related to the original deal Concord signed with the provincial government when it purchased the lands in 1988. Called the “public participation mortgage agreement,” Concord is required to make payments to the government — in addition to the original sale price — when it surpasses the amount of density allowed for development on the lands.

According to Webb, Concord is already at the “tipping point” and “on the cusp of completely exhausting existing density negotiations” reached with the government in 1988. The staff report suggests any additional payments — which Webb described as “sort of found money” — be redirected to the city as part of the funding strategy.

Asked how much money that could be, Webb said it was “a fairly sizeable number.”

Council resumes at 4 p.m. Tuesday (Oct. 27) to hear from more speakers and then is expected to make a decision on whether the viaducts should be demolished.