The Vancouver Public Library has wanted to build a full-service library in the Downtown Eastside/Chinatown/Strathcona area for 20 years. That goal comes closer to realization Nov.
Nov 14, 2013 12:23 PM By: Naoibh O'connor 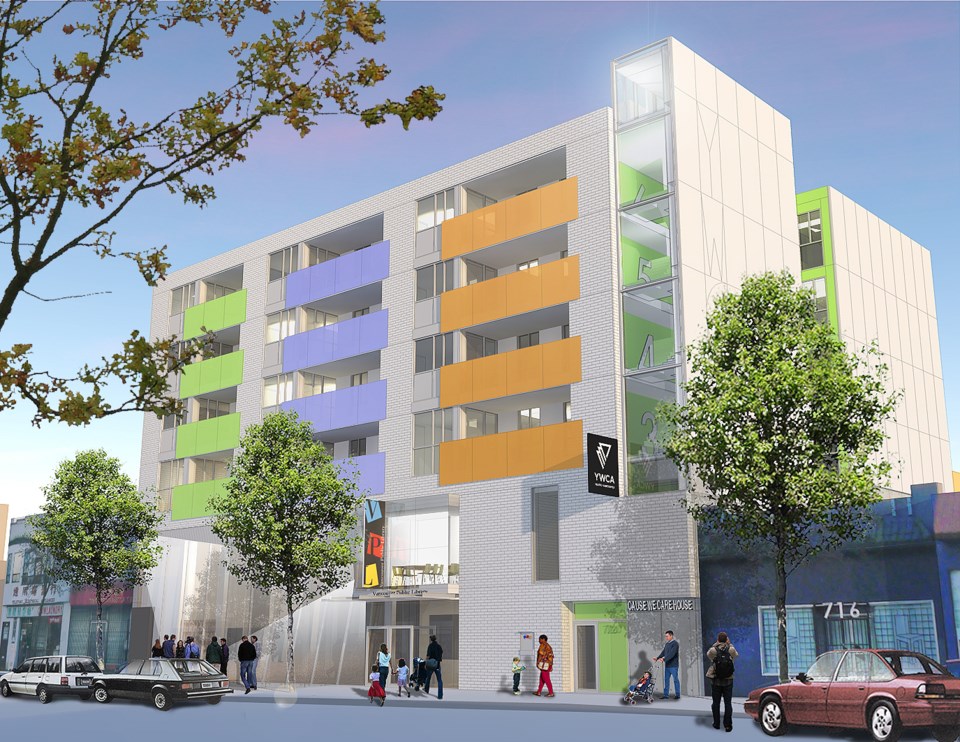 The proposed site for social housing above a new library is at 720-730 East Hastings. photo rendering courtesy Dialog

The Vancouver Public Library has wanted to build a full-service library in the Downtown Eastside/Chinatown/Strathcona area for 20 years.

That goal comes closer to realization Nov. 19 when a rezoning application for 720-730 East Hastings — the proposed site for the new library — goes before a public hearing.

The project, a joint initiative between the city, VPL and YWCA Metro Vancouver is for a six-storey building designed by the firm Dialog on the city-owned site. It includes two floors for the library topped by four floors of social housing, dubbed Cause We Care House, designated for single mothers.

Cityspaces Consulting Ltd. submitted the rezoning application on behalf of the City of Vancouver. VPL is kicking in $15 million for construction, architectural and consulting fees, as well as library collection costs, while YWCA

Metro Vancouver, which is leading the project, is contributing more than $10 million — it’s $2.45 million short of its fundraising goal. The YWCA’s portion includes an endowment to offset its operating costs. The Cause We Care House will feature 21 units — 10 two-bedrooms, 10 three-bedrooms and one four-bedroom. A community family program space will offer medical services, employment services and a mom and tot program. Rent will be 30 per cent of tenants’ income. The library will cover 12,000 square feet.

There is a small library branch at Strathcona elementary, jointly run by the VPL and Vancouver School Board, as well as a small branch at the Carnegie Community Centre with a specific mandate to serve the low-income population in the Downtown Eastside, said Beth Davies, VPL manager of neighbourhood services.

She added the partnership with the YWCA for the new building works well because of similar goals.

While proposed developments in Vancouver often attract criticism, this project hasn’t based on public feedback gathered by the City of Vancouver. Ninety-three people attended an open house in June. Twenty-one people provided feedback through email, phone calls or comment cards. Supportive comments focused on the purpose and use of the building, as well as its general architecture and design, according to a city report, while concerns were raised about the proposed height and impact on views. Some want assurances the detailed design will address crime prevention and there was concern about whether there will be enough parking spaces.

As of Wednesday afternoon, only one speaker had signed up for the public hearing and no one had submitted correspondence.

Davies said there’s a lot of support for the project.“One of the advantages of taking a long time is that we’ve done an awful lot of community consultation, so we’ve talked to the community about the practicalities of what they want to see in the library,” she said. “It’s built up a certain amount of credibility with the community.”

Chantelle Krish, a spokesperson for YWCA Metro Vancouver, said the Y has had a historical presence in the Downtown Eastside, pointing out it operates Crabtree Corner nearby.

Davies looks forward to opening day. “We’re really trying to expand the definition of what a library can be, so we really see this being a community gathering space.

Since the City of Vancouver owns the land, it will lease back what is called an airspace parcel to the YWCA for 99 years, plus an option for an additional 25 years. The library and the YWCA will retain ownership interest in the project proportional to its share of the building.