Donald Trump is giving his name and his brand to Vancouver's newest luxury hotel and, judging by the large crowd at Wednesdays press conference, that's already doing a lot to get the development noticed.
Jun 18, 2013 9:00 PM By: Martha Perkins 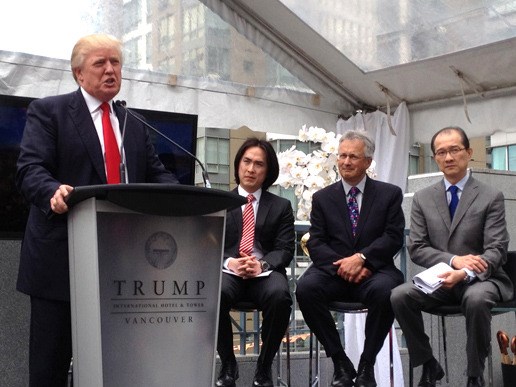 Donald Trump is giving his name and his brand to Vancouver's newest luxury hotel and, judging by the large crowd at Wednesdays press conference, that's already doing a lot to get the development noticed.

"Vancouver is a beautiful city and this will make it even more beautiful," Trump said as he joined Joo Kim Tiah of Holborn Group and George Wong of Magnum in announcing the 63-storey Trump International Hotel and Tower adjacent to FortisBC on West Georgia.

Listening attentively were his children Donald Jr., Ivanka and Eric, who will play a role in the development.

But somewhere in the firmament, the late architect Arthur Erickson was also nudging to have his presence felt. He's the one who came up with the concept of a twisted triangle design that will allow the tower to conform with the City of Vancouvers view corridor guidelines. (Each floor will twist about three-quarters of a degree away from West Georgia.)

Construction has already started on the $500-million building that will have 218 luxury residences on the upper levels, 187 hotel rooms, Ivanka Trump's new spa and Vancouver's first pool bar nightclub. The third-storey terrace at FortisBC, where the press conference was held, will be become a shared conference centre space.

The building is a personal triumph for Tiah, whose family had to put plans for its previous incarnation as a Ritz-Carlton hotel on hold in 2009 because of the economic downtown. He made it his personal mission to see the project come to life again.

It was a bleak time, he said, noting that he wasn't the only one who was disappointed that Erickson's concept design was put on hold. The city has an emotional connection to Erickson, Tiah said, and the tower will guarantee Vancouver's position as a truly international gateway city. "I want it to surpass anything that had been done before."

Tiah praised the Trumps, saying that he and Donald Jr. share the same sense of duty and responsibility that comes with being the second generation to take on a family's holdings. "He takes the family name and brand very seriously," Tiah said, adding that Ivanka is bringing strong leadership skills to the design of the spa.

"I have been nothing but impressed with the family," said Tiah, who presented each of them an umbrella as a welcome-to-Vancouver present.

Donald senior was the only member of the Trump family to speak before being quickly whisked away.

"What you see here," said Magnums George Wong, pointing to the large media contingent, "is what a name can do." He said Trump can be somewhat controversial but hes also a gutsy entrepreneur and a reputable builder, and also has a strong philanthropic bent.

Wong said it will take about three months to determine the price range of the residences. Some of the suites have been re-imagined and resized to conform to today's market pressures but they will still be in keeping with luxury standards. There will be a healthy inventory of large suites but some smaller suites as well.

When the world sees the building, Wong says, it will be mesmerized by the allure of this place.

Dane Jansen, the principal of DYS Architecture, has been working on the project since 2004, when Holborn asked his Vancouver firm and Mark Thompson of Musson Cattell Mackey Partnership architects to take on the design.

The site was an abandoned shell of a building.

"When you're doing a hotel, they take a long time to manifest," Jansen said in an interview with WE Vancouver. "We were working on the building and [Erickson] helped inspire the direction we took on the tower portion.

"Arthur was still pretty present at the time we were working it through. He was always very engaged. I think it will be the last Arthur Erickson concept to be built."

Jansen added that while he had been pleased to work on the Ritz Carlton version of the tower, he loves the modernist flair of the Trump version. The Ritz Carlton has a proud tradition but it is a conservative motif.

He also praised the professionalism of the Trump team. "They're very experienced people who looked at the project and said 'How can we tweak it and make it good for us?' They tried to fit as opposed to getting us to bend."

It is hoped that Trump International Tower and Hotel will welcome its first guests in the fall of 2016.